Making an easy cruise through lowlands of Colombia. It is humid and afternoons can be warm. However, mornings are pleasant cycling and hence have made some shorter rides before skipping to an air conditioned room in the afternoon.
Day One
Hot humid afternoon makes for another morning ride. 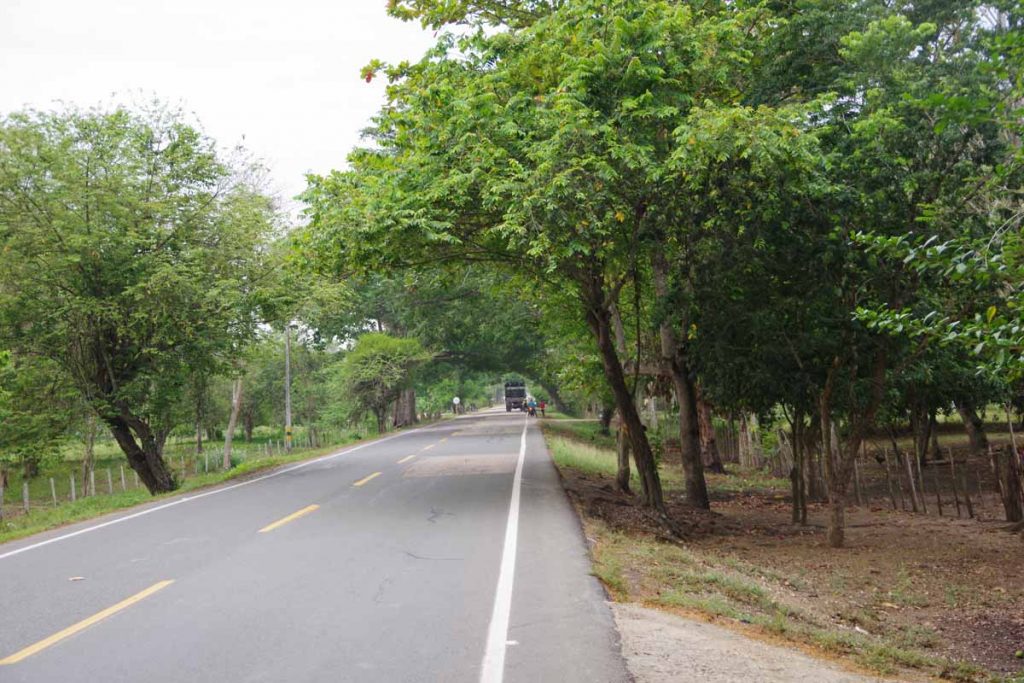 Made my way to larger city of Sincelejo, though my “maps.me” application somehow didn’t point me at right location for the hotel. Hence, found a spot near the main highway outbound from town. A nice restaurant nearby but no internet.

Once again out on the road early. It started near 22C (71F) but warmed steadily through the morning. The road was mostly flat for first half of the ride and then hilly in the second half. 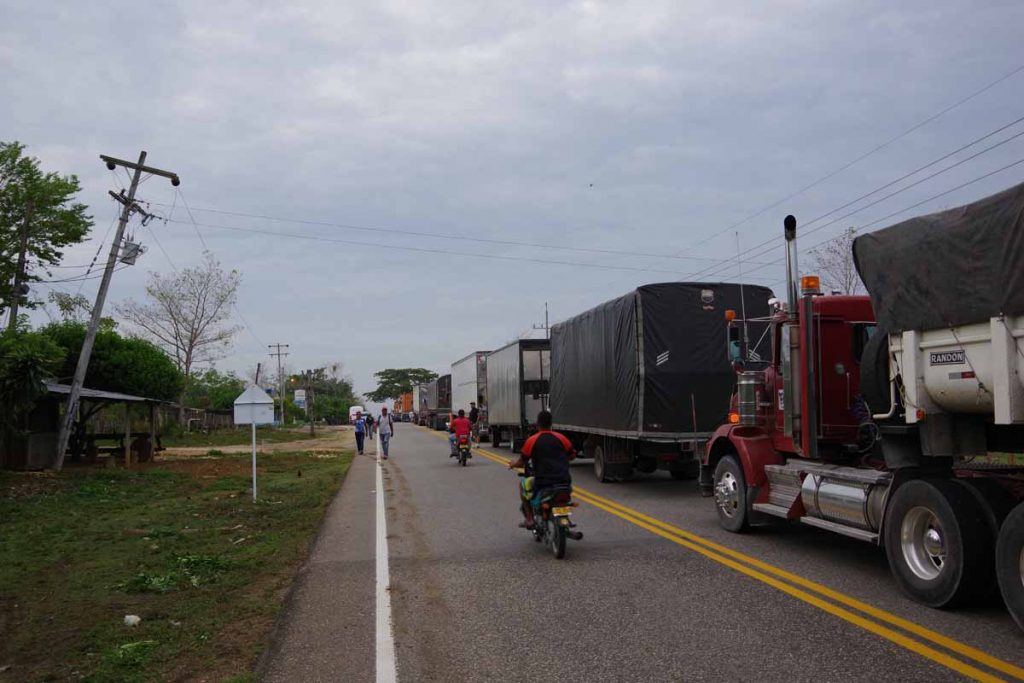 At the 6km mark, there was a long line of trucks backed up and no traffic from the front. I carefully cycled in left lane to figure out what was going on. It looks like a local protest had blocked the road. There were branches spread across the road and a set of young people on top of those branches – keeping the road blocked.

Nearby were half a dozen police officers. I looked at the officers with a puzzled look. They motioned over to the side to tell me to carry my bike over the branches on side of the road. So carefully walked over and kept eyes open as I walked over the barricade. All the trucks and even motorcycles were stopped, but somehow it was ok for a bicycle to pass. 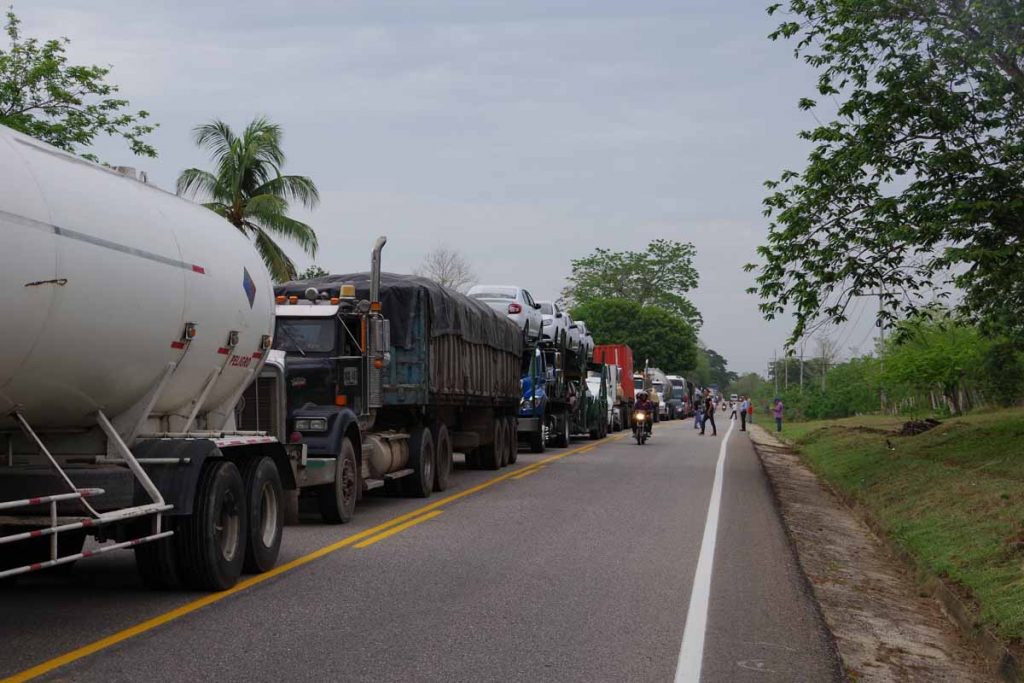 After that passed the long line of trucks waiting the other direction. The road became pretty quiet with no traffic from behind and only occasional vehicles from front. Otherwise pleasant cycling though occasionally with a rough road.

At 27km, I came to small village and stopped for a snack. Right about this time, a large number of cars and trucks came past. Apparently, the roadblock was now over. I waited a bit to let the worst of the traffic pass. After this point started having some small hills.

At 36km was town of Tolo Viejo and shortly thereafter the road joined with another major road. It became a four lane divided highway and briefly went past a toll road. The hills continued and by now it was getting warm. 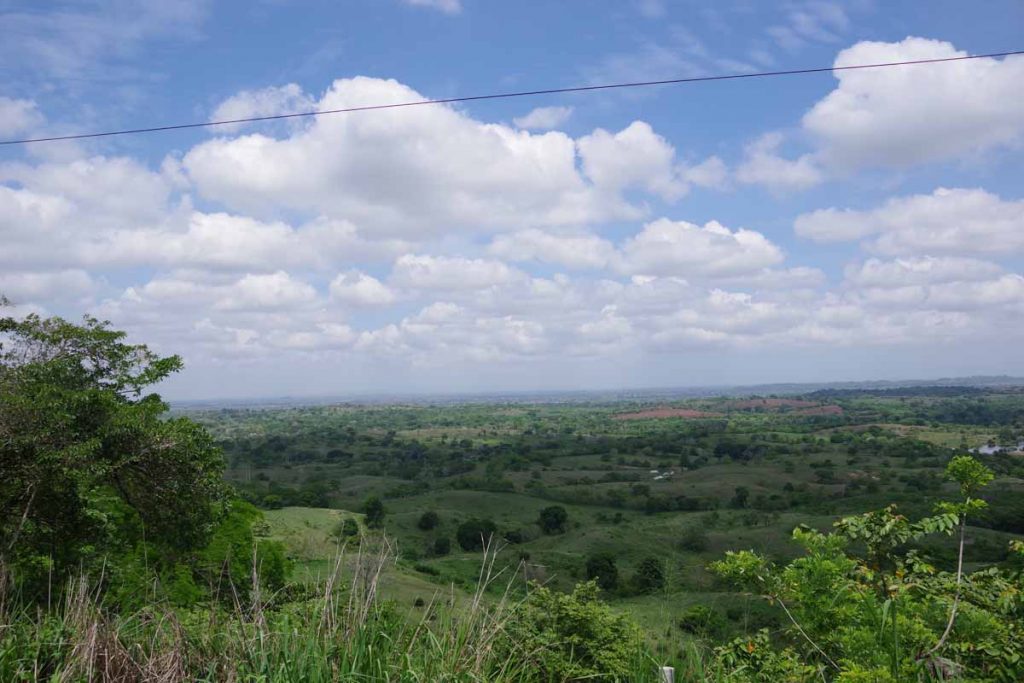 Stopped one more time for a cold coke and to cool down a bit. Shortly thereafter made a steady climb up to Sincelejo. Nice views over the country side.

I have an Android app that pointed me to a hotel I had picked: Hotel Arawak Plaza, presumably next to the plaza. I cycled straight into the city. 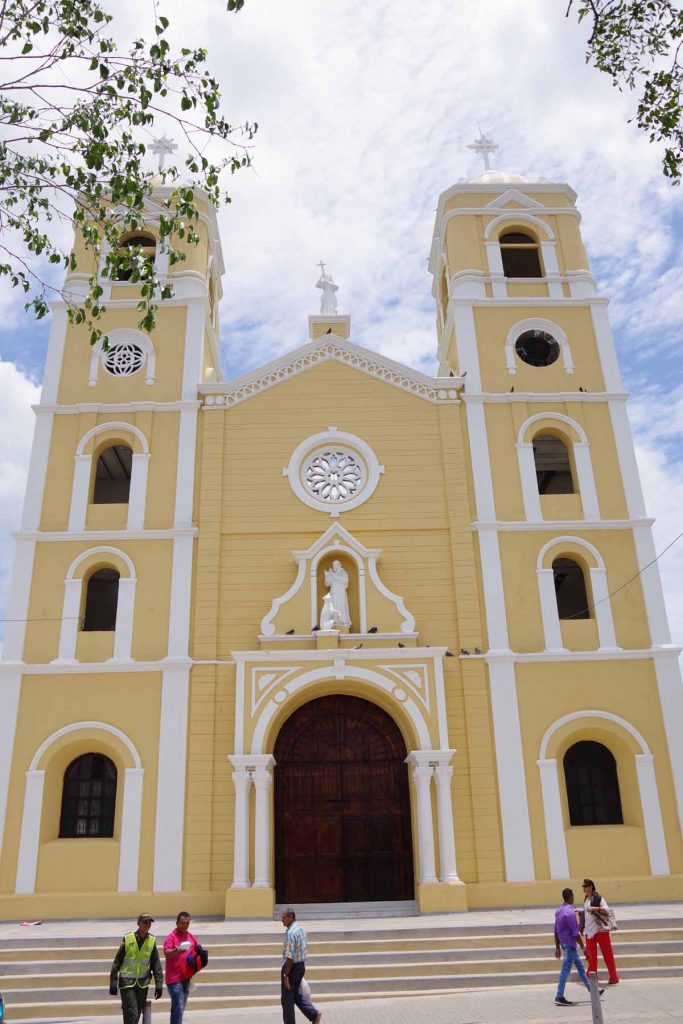 Came right into center of town, presumably also the plaza. I should have looked around here a bit more, since often hotels are found right next to the town square. However, followed my map and discovered there wasn’t a hotel where I expected.

By now I was already headed “outbound” and knew from other blogs there would be something at road intersection leaving town. Hence, cycled to this road intersection. It was warm enough that decided it would make for a good stopping point and chance to tackle road ahead tomorrow morning.
Day Two
Misty overcast morning as I started today. Children go to school early as I passed many walking along the highway when I was riding at 6:30am. Roads continue to be reasonable, in terms of road condition, traffic and shoulders. Overall, like cycling in Colombia so far. 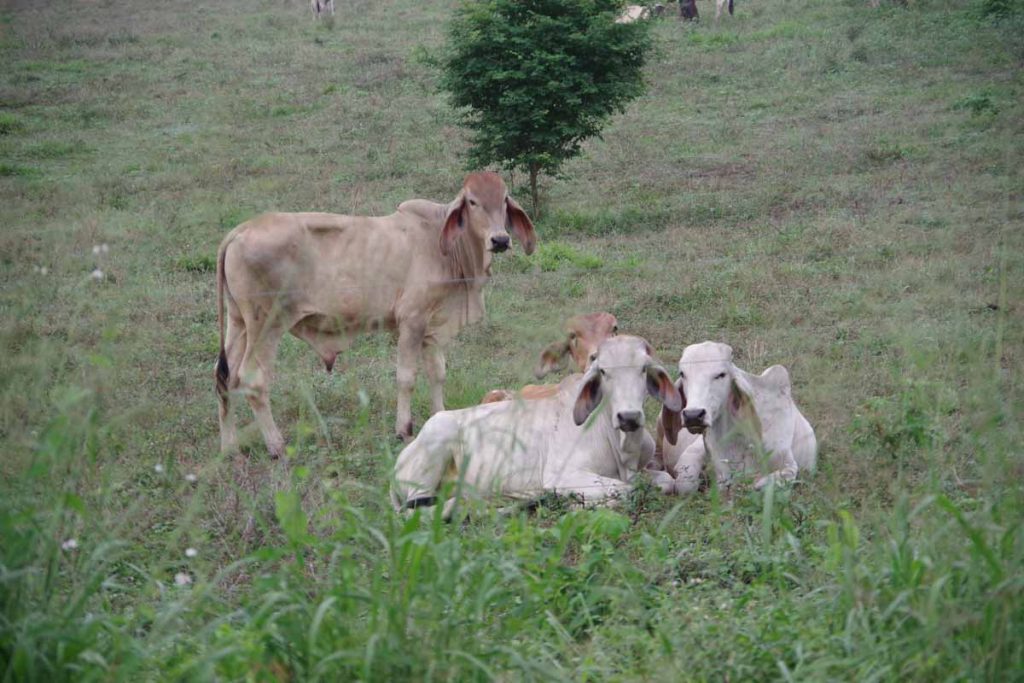 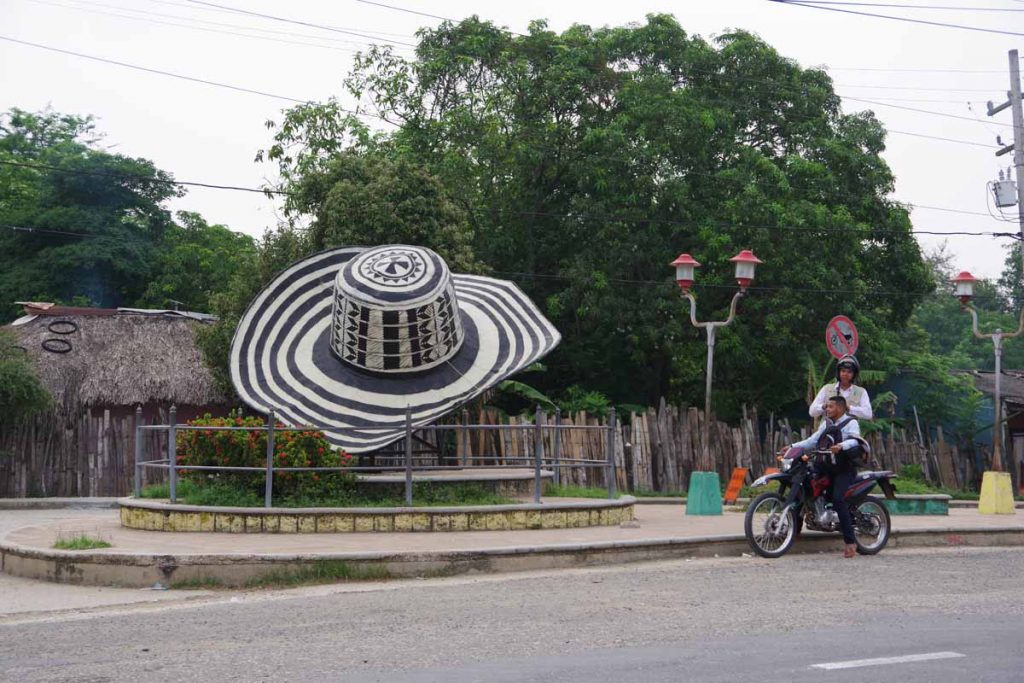 I see these Colombia hats occasionally worn. The town of Chinu had this large hat, but also many smaller shops selling them as well. Also saw several signs for “artisan” as well. 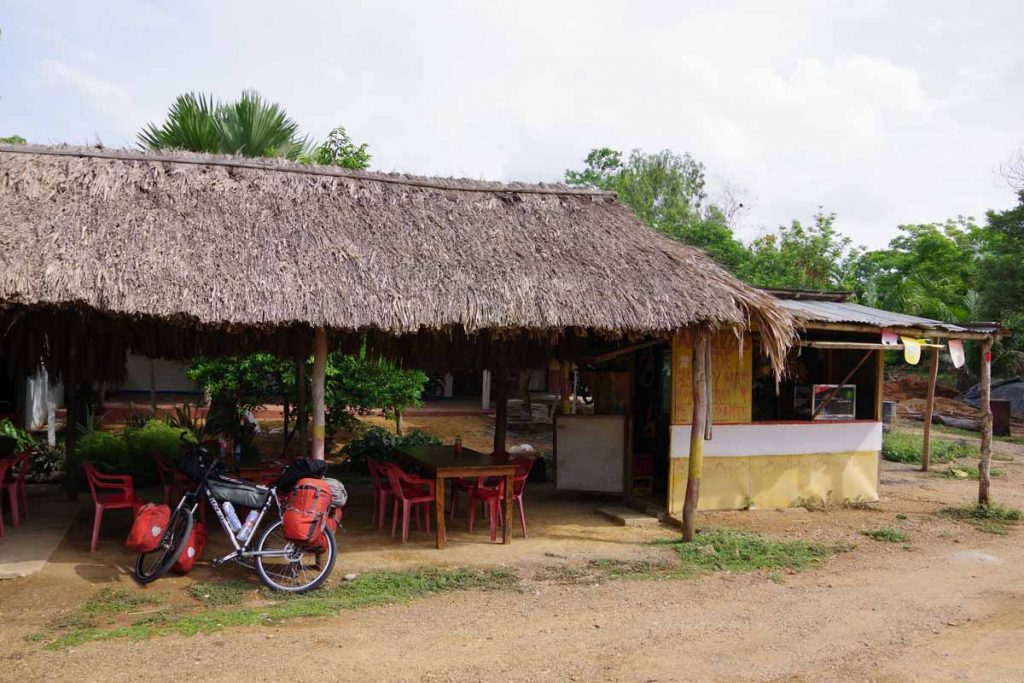 At 27km, it was time to stop for a cold drink. It was still relatively cool. Other journals had described the route today as “hilly”, though then it turned out easier than expected. Still made it a shorter day as this is how the towns lay out. 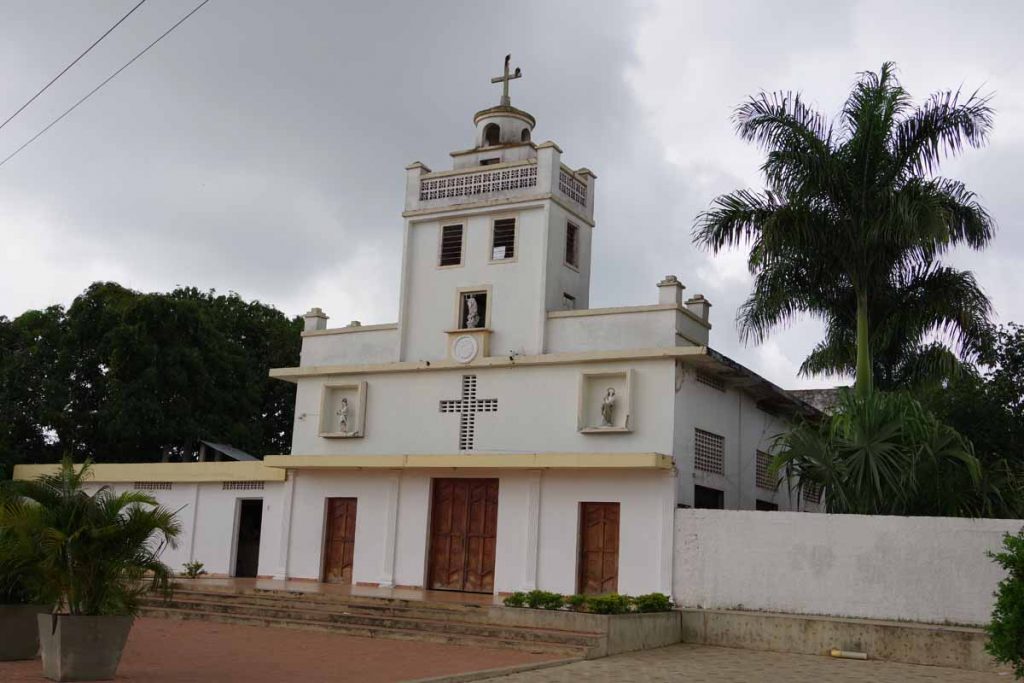 At 42km I went into town of Sahagun to find a bank. Typically can be found around the town square. It took a bit, but found my way first into the middle of the town and then back out. After that, headed for a hotel that had been listed in one of the blogs I’ve followed. They were full, so continued southbound. A few kilometers south of town there was a hotel and restaurant. I first had lunch in the restaurant and then decided to stay in hotel (wifi is only so-so, but otherwise one of the nicer places I’ve stayed).

Otherwise having fun on a slow cruise through countryside of Colombia. I expect ~200km from here I’ll enter first a river valley and then have substantial climbs into the Andes over to Medellin. Elevation should make for cooler temperatures though also a lot more climbing.