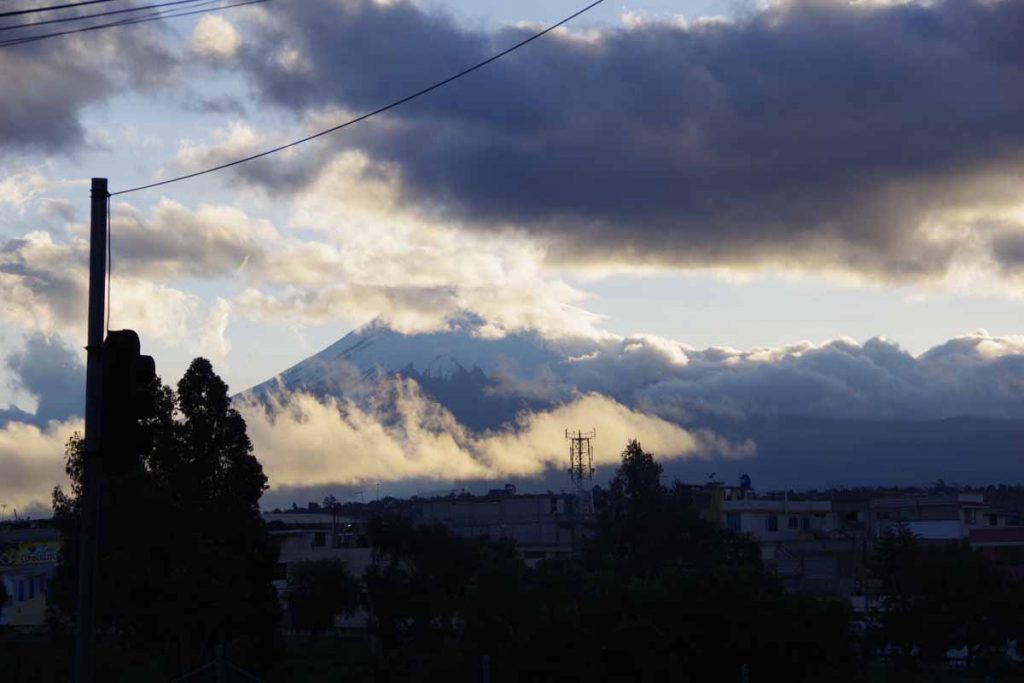 While the summit wasn’t visible, it was nice to spot Cotopaxi this morning, Equador’s second highest point. I cycled through rest of Latacunga town and then was on a four-lane highway with gentle descent down the valley. It was easy cycling with only a hill or two. At 13km, I came to the next town Salcedo. 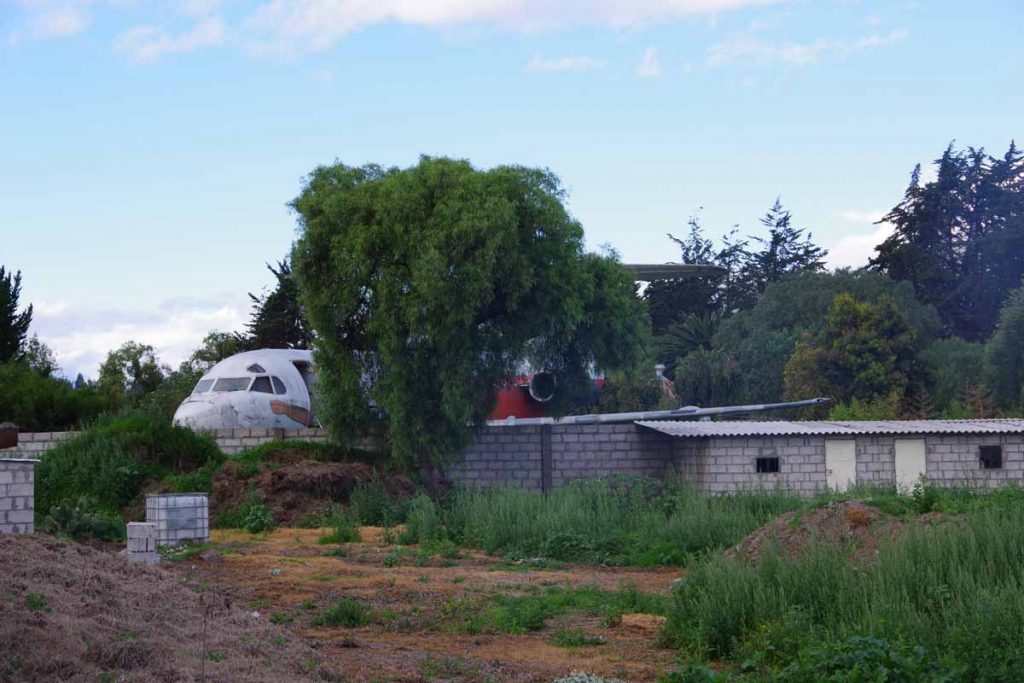 Not sure why, but hidden behind a low brick wall was this old 727. There wasn’t an airfield or similar nearby. The route took a zig-zag route through city streets before then going and joining the main 35 highway at 18km. There was a toll plaza followed by a 100m climb and after this point, the road shoulders were narrower. 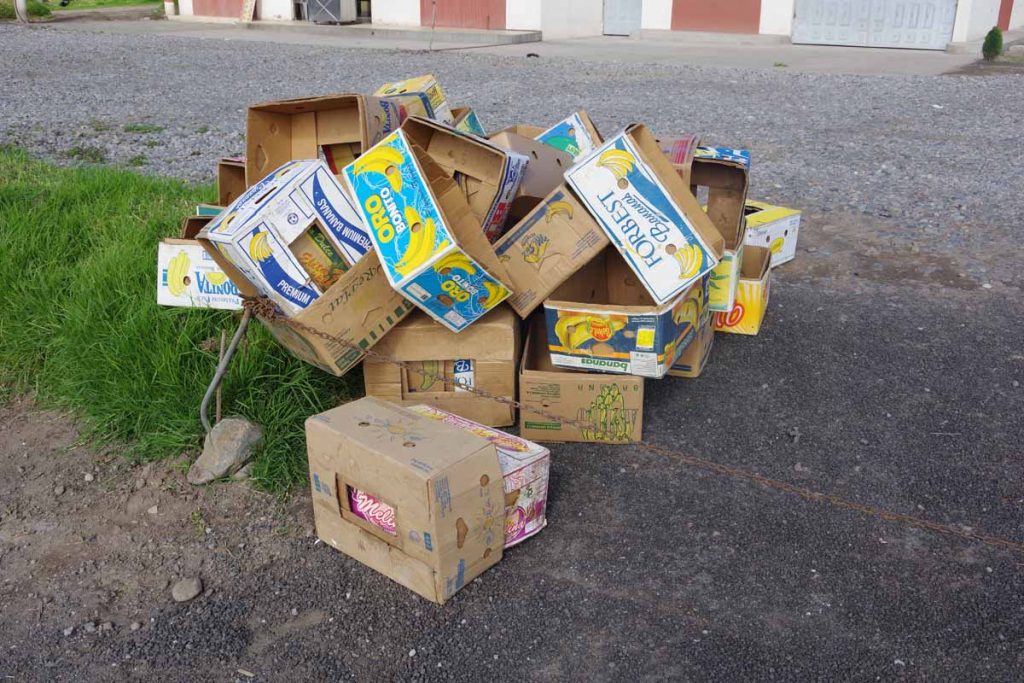 Why the photo? One thing I’ve noticed in my travels is Ecuadorian bananas are pervasive in a large part of the world. They seem to get shipped in a particular size box, almost always with lettering in English and often a weight in pounds instead of kilograms. These boxes then get re-used for a lot of purposes.

As an example, in my ride across Russia, I saw these same boxes in some small towns in Siberia. Despite both Ecuador and Russia being on metric system and neither having English as primary language, they were still standard format. I also found it interesting to consider that path those bananas took to get from Ecuador into interior of Russia.

I’ve found the same boxes in other places in the world as well, though Russia is perhaps my most remote example. I believe many of the bananas in the USA come from Costa Rica, but Ecuador is then largest banana exporter to rest of the world.

That is why I took the photo. 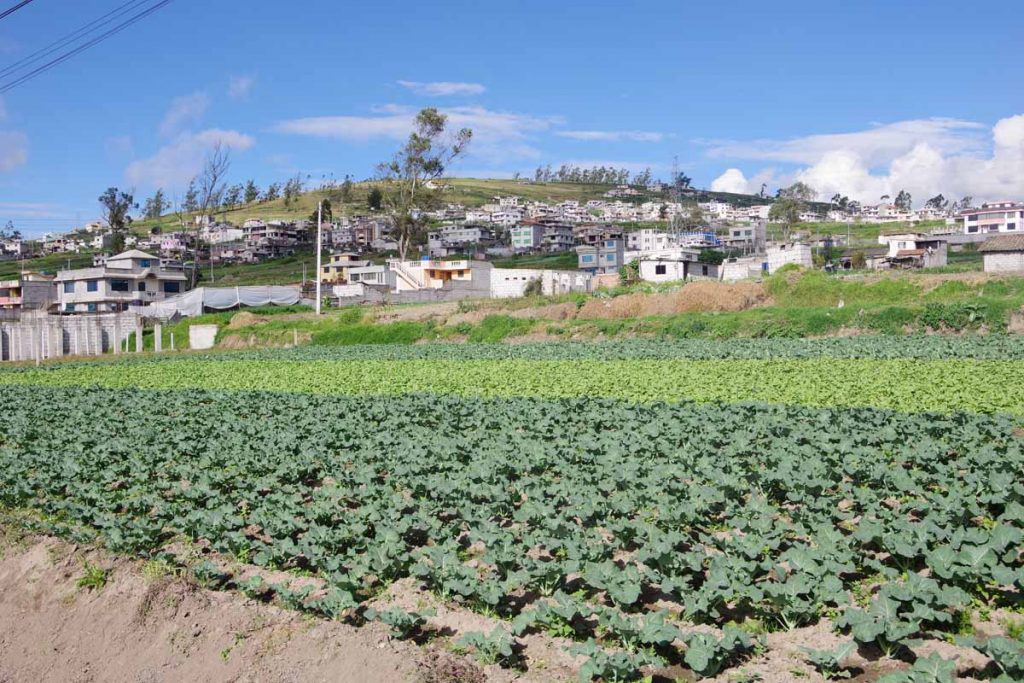 Nearby was agricultural land such as this area. Despite the fields, or perhaps because of them, there are also a lot of houses as well. 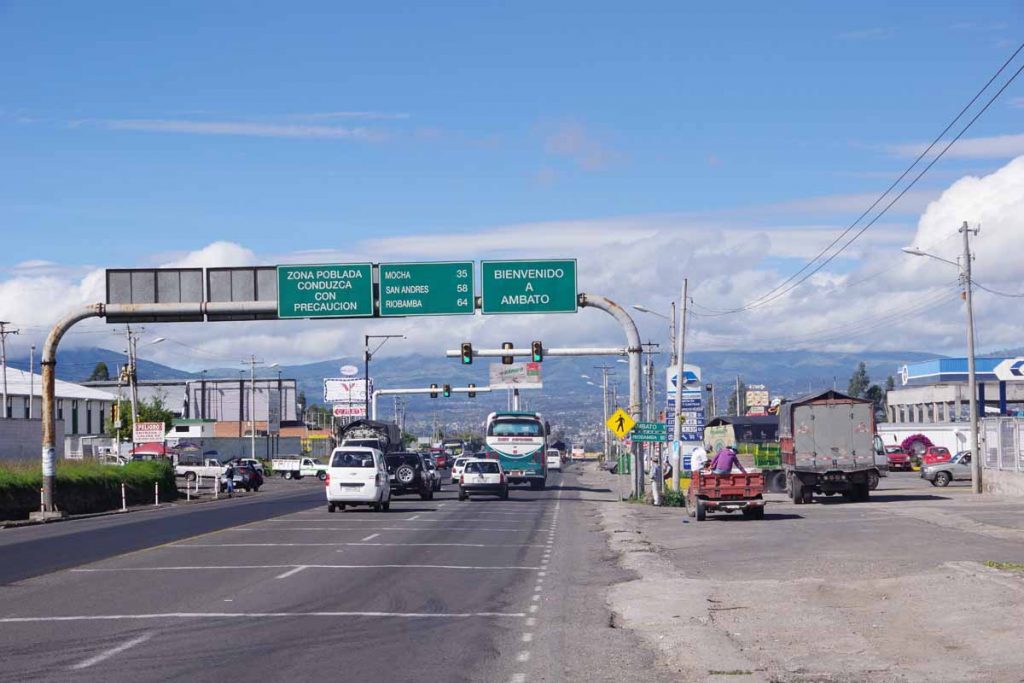 At 34km, I came to a choice point just before town of Ambato. This photo summarizes the main items:

After stopping at the Petro Ecuador at the right and having a break in the mini-market, I decided to go into center of Amato and see from there. 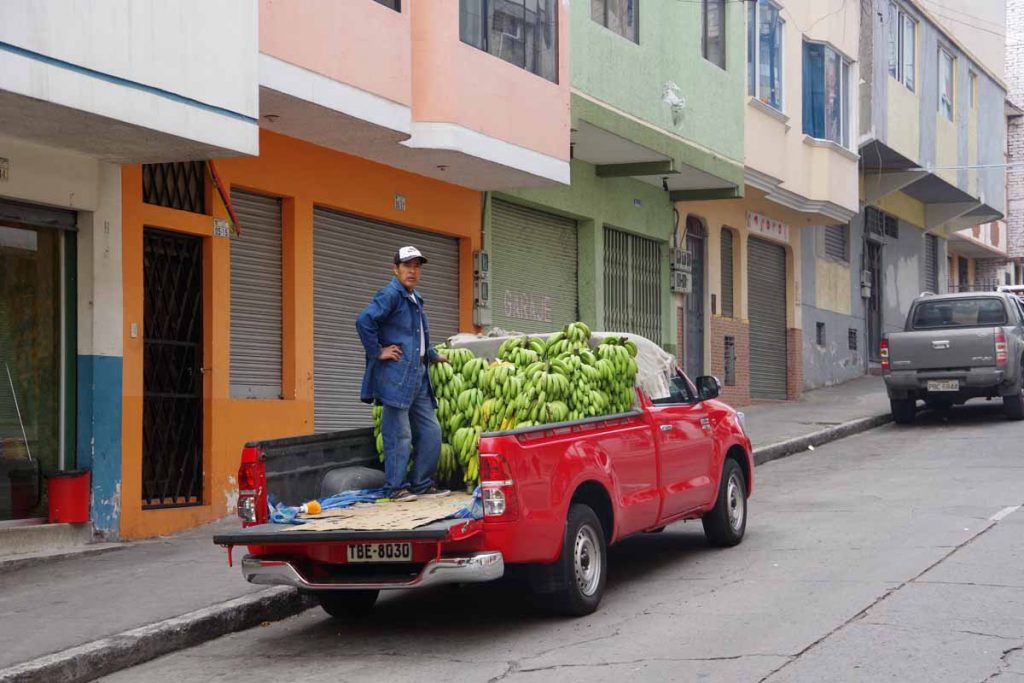 This guy was delivering bananas, though interesting no boxes to be found. 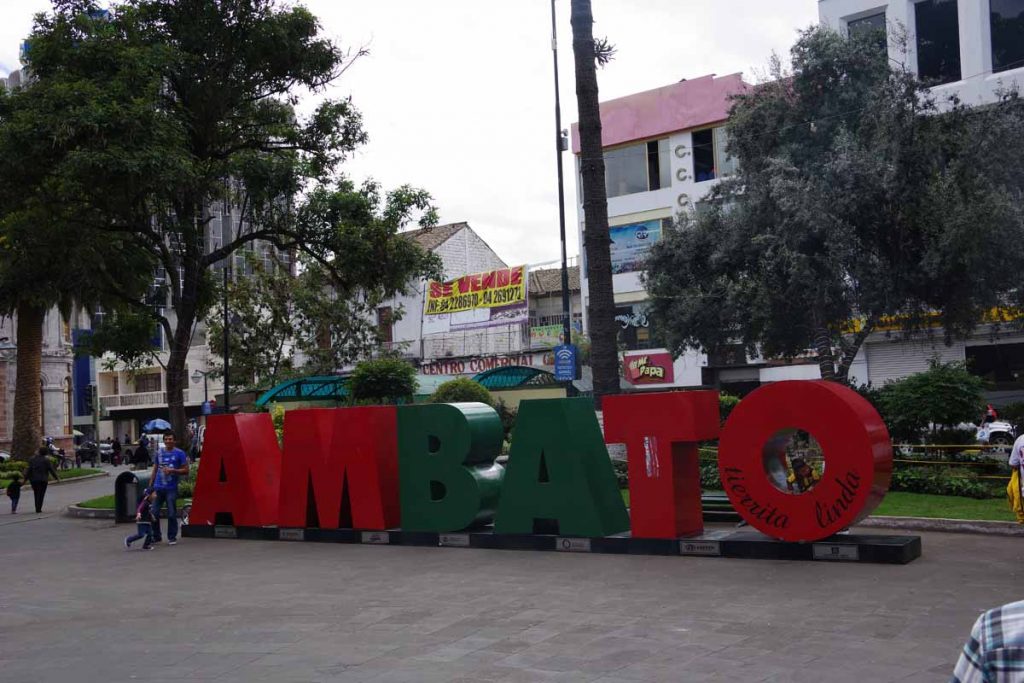 I reached the main square in Ambato. 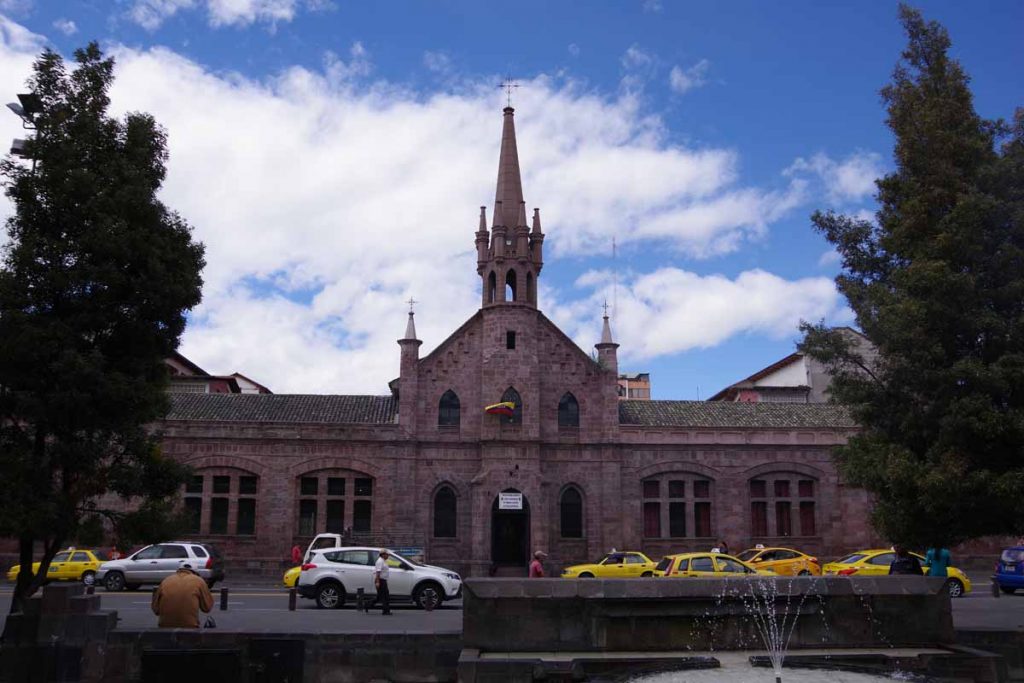 There was a nice church here.

After leaving the square, I started on the outbound road. There was a short hill here with an insanely steep grade. I pushed the bike up the hill. 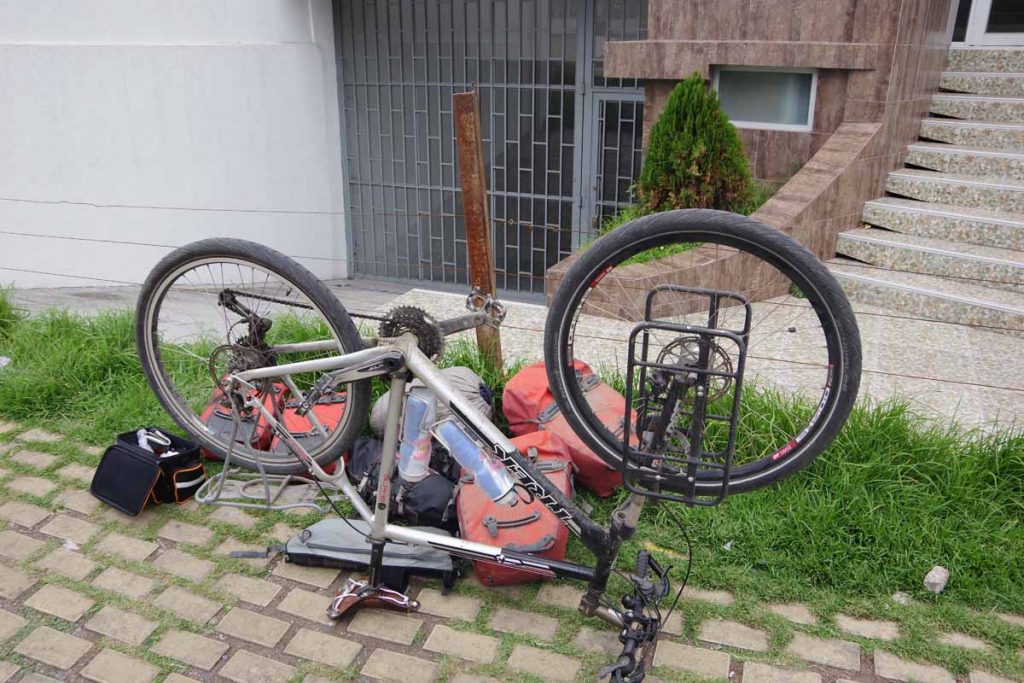 A little further, I felt my tire go flat. I had ridden over glass. Took a slow careful time to unpack everything, diagnose the flat and then fix it. It was directly in the middle of the tire. Hopefully doesn’t leave a hole for further flats.

After the flat, I decided to stop at next hotel along the way, only 2km further. Nice hotel and I’m on the “outbound” road from Ambato about 5km from city center. So still close enough to have stores and services and also 150m higher than city center so a little less climbing for tomorrow. 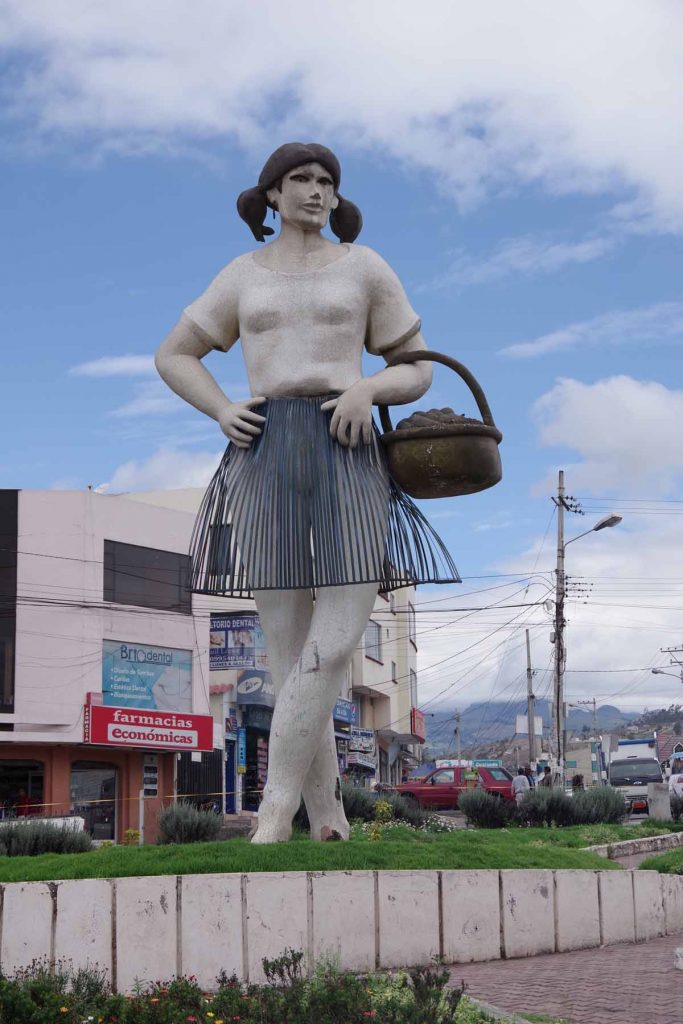 Note: This post was all ready to go when the internet stopped working. I had a fun Spanish exercise of asking, “can I reboot the router” to someone who seemed to think the remedy to a DNS issue was to connect from elsewhere. In the end it didn’t help. I also ran through my cell phone MB without internet so until I can recharge those minutes, won’t have internet from the cell phone. In any case, uploaded today instead of yesterday.