Found my first flat road in Ecuador. Only 3km worth, but seems longer than previous flat stretches. 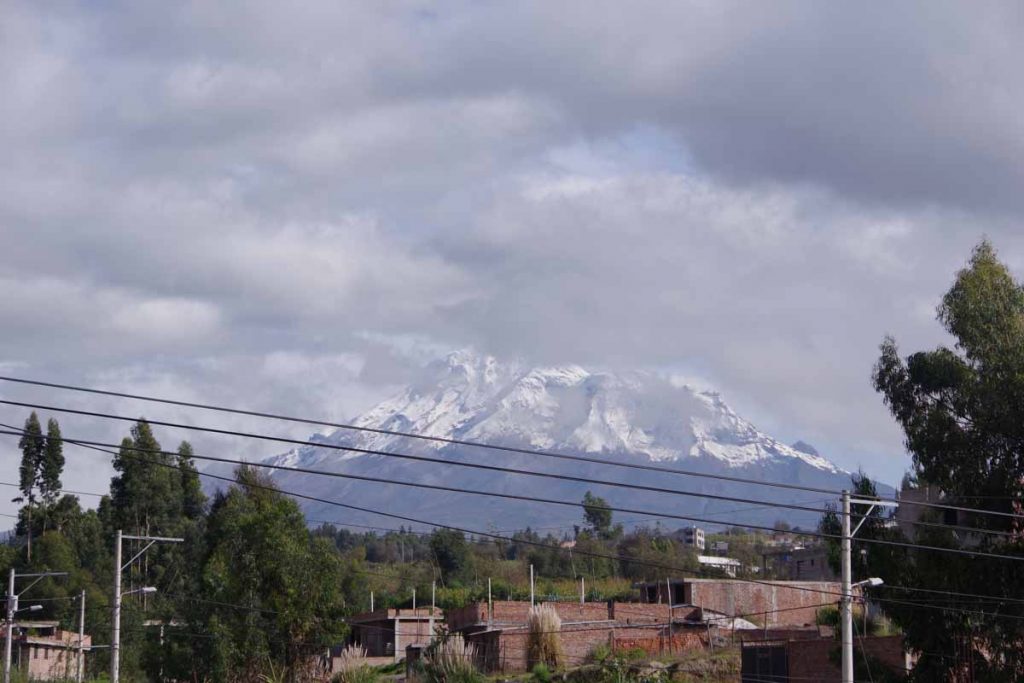 I wasn’t expecting today to be too long or difficult, so had the included breakfast at the hotel. My routine has generally been to set my alarm for 5:30am and get on the road when I am ready, typically a little before 6:30am. Today I was an hour and a half later.

The first 5km were through an urban area with lots of traffic. I was pleased to see just a bit of Chimborazo again even if the top was hidden by clouds. 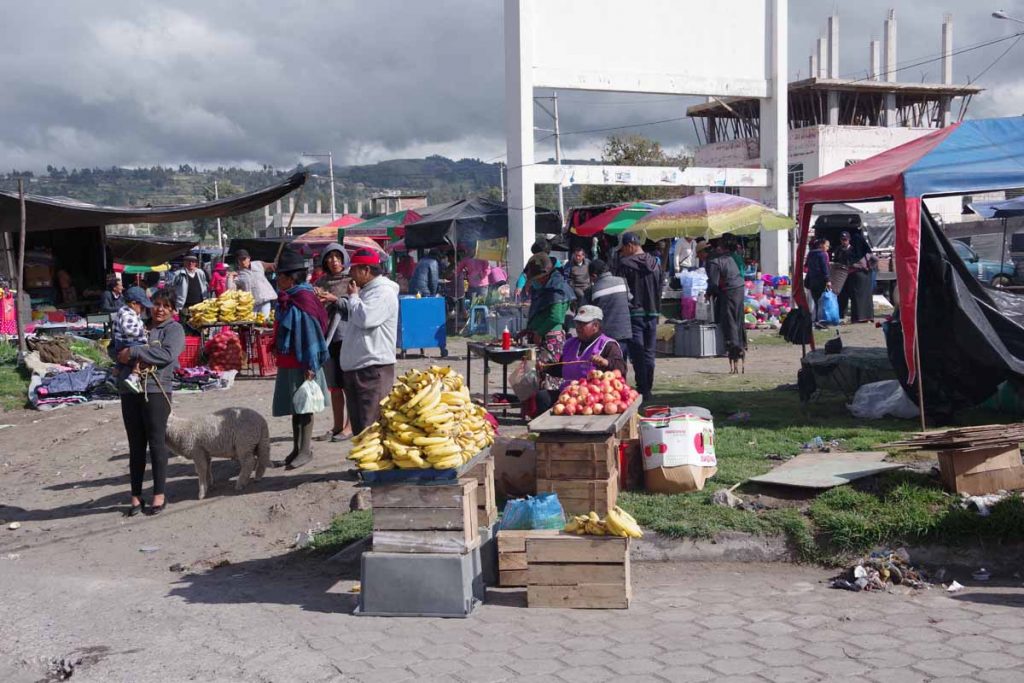 It was very busy in this area and as I came past 7km, I saw everyone seemed to be on their way to this market. After this a lot less on the road. The first 20km had a bit more climbing than descent. 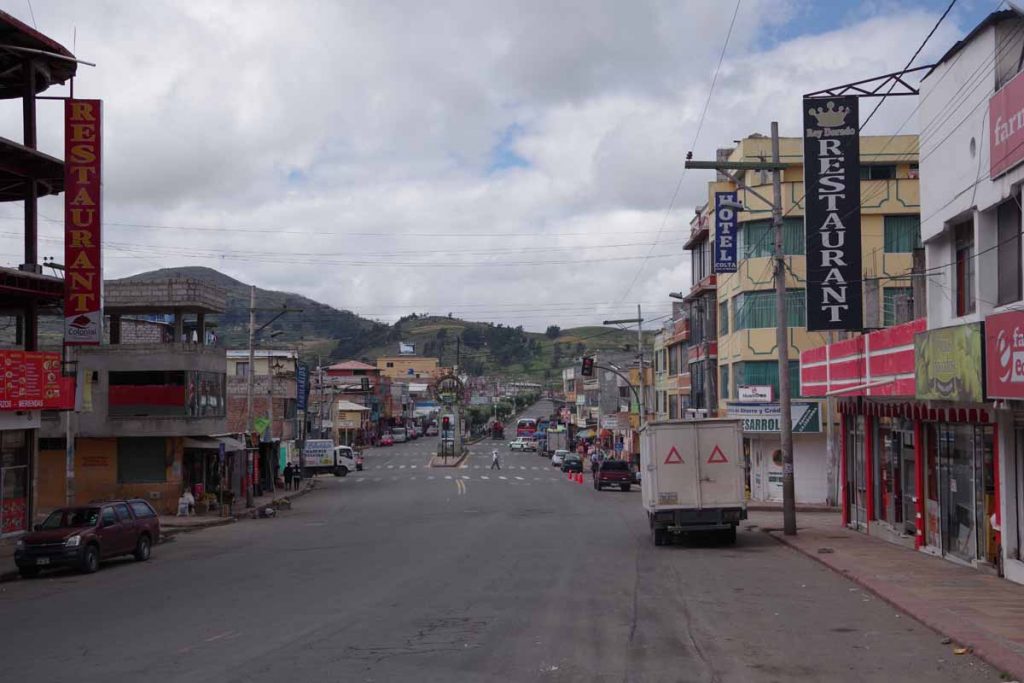 I came through this small town. 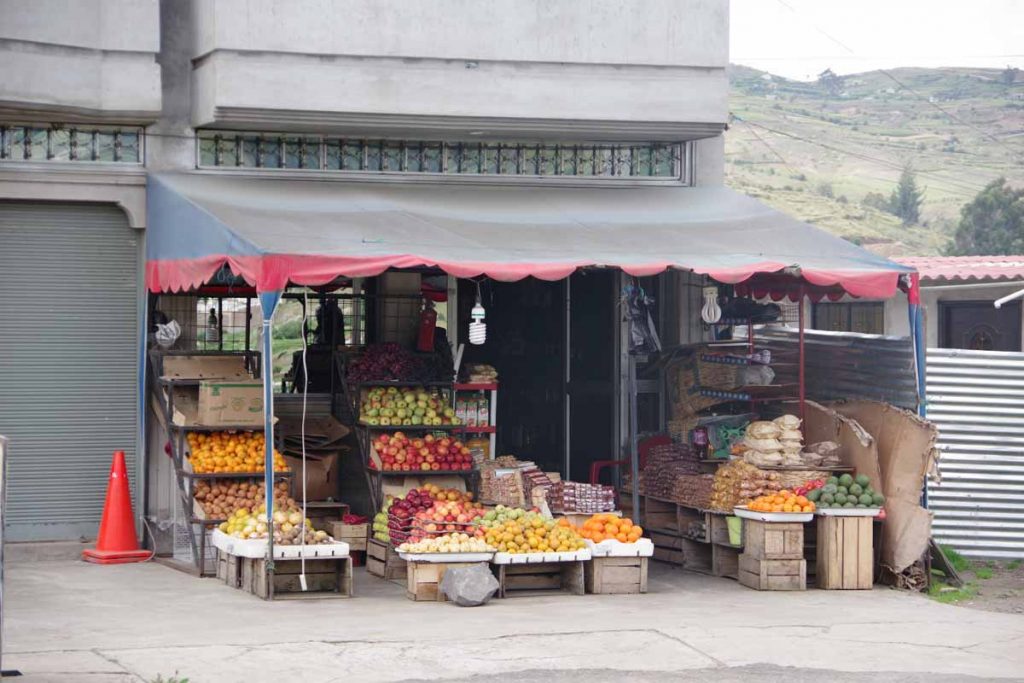 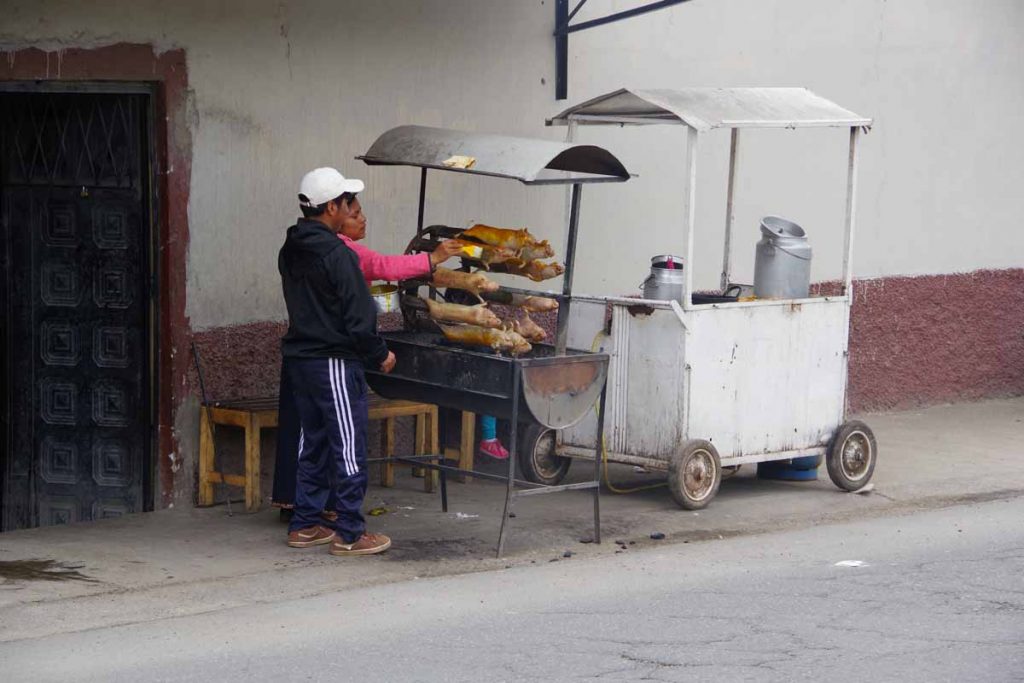 Roasting cuy (guinea pigs), apparently one carrousel can hold ten. They were busy putting on sauce and then slowly rotating them over the fire.

After the 20km point, there was a brief section that was actually flat. The road paralleled shore of a lake as well as a railroad track. After this point, the rest of the day was also fairly easy with more descent than climb. 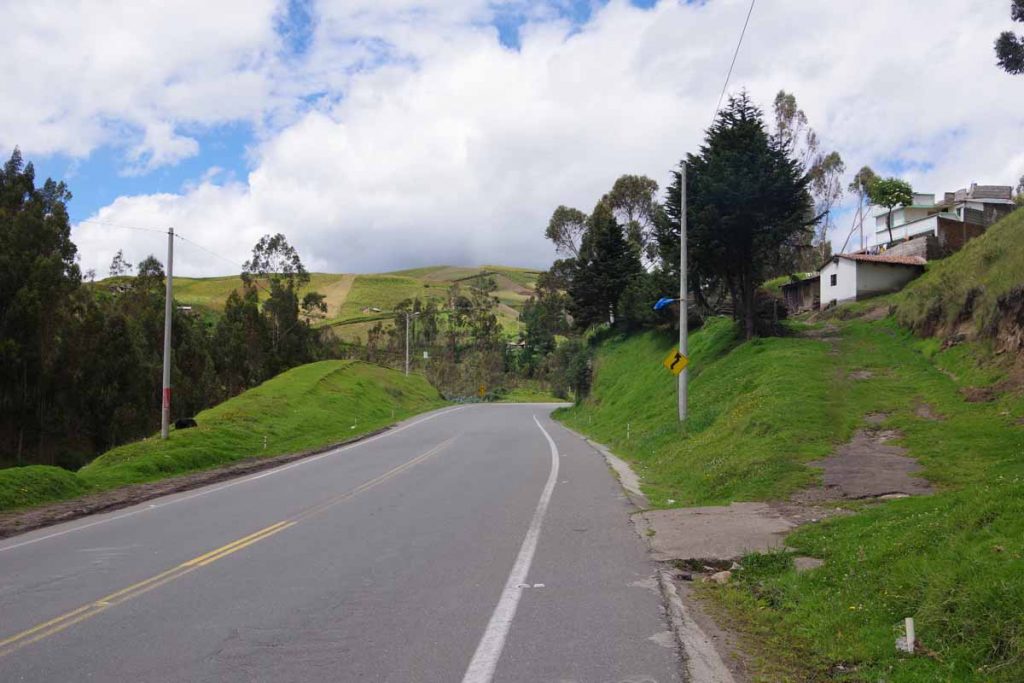 A good example of the road. 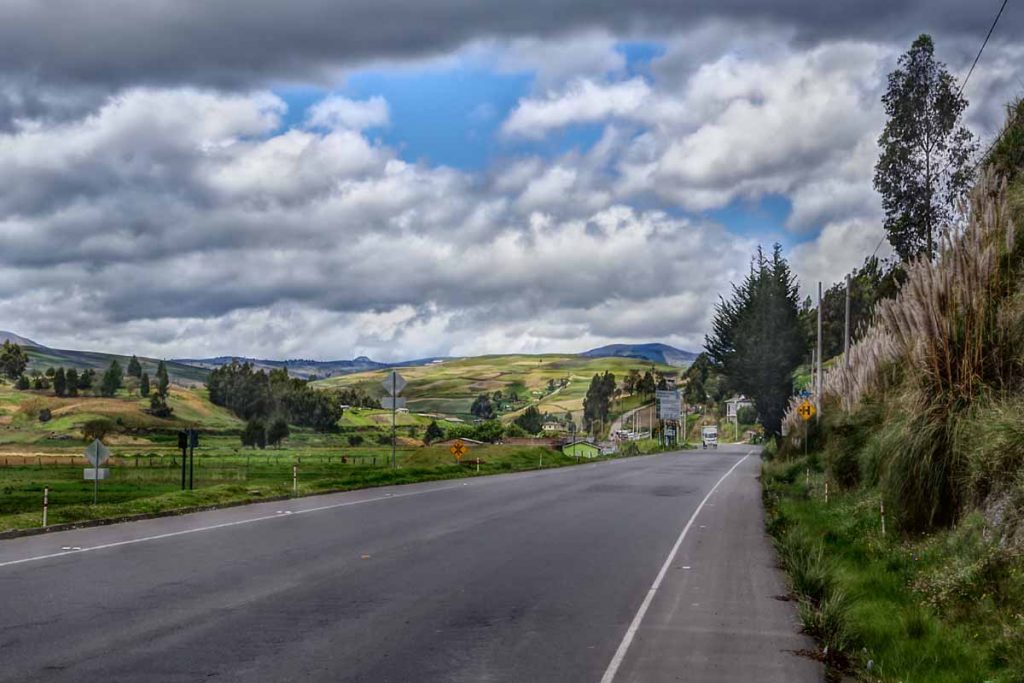 A similar section of road that I took with HDR mode in my camera. 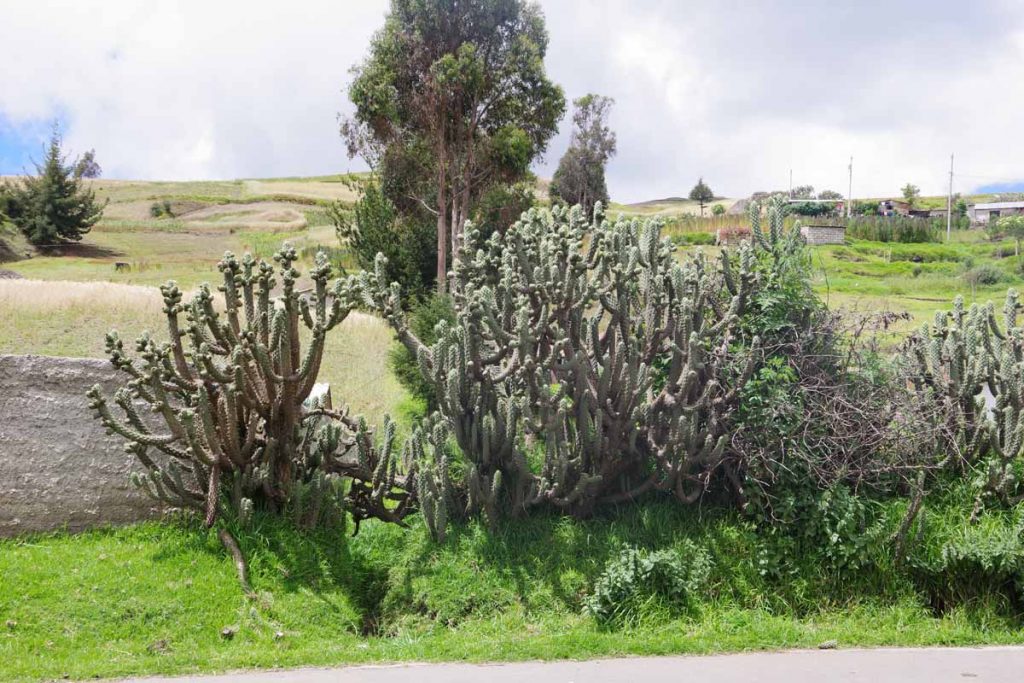 Saw these interesting cactus type plants as well. Definitely drier here than in Colombia, though not quite arid either.

Even with late start, I was in Guamote not long after 1pm. I found a hotel that looked locked. However, ringing the bell and someone came. I didn’t have a bell later to ask to be let out, but eventually someone showed up. Once again, internet was connecting locally but not to the DNS server more remotely.

There wasn’t much to the town, but I tried to see if I could get my phone updated with internet again. The first shop wasn’t much help as they kept asking if I had saldo (remainder) on my plan. I had a few days left, but had gone over the data limits. However, they couldn’t figure it out.

Next place I stopped was an internet café with a young woman (hard to guess age, 16? 25?) attending. We couldn’t update my existing carrier, but she could sell me a SIM card for another provider, Claro. Upgrade went easily, but then we were missing some configuration to make the internet connection. She kept at it, with help texts and calling Claro until it was working.

Later in evening there was an attendant at hotel that I could show the non-working wifi. He plugged in the network cable to the wifi extenders and all was working again. Definitely interesting to have combination of tech stuff as well as language mixed together. Usually, I have a good idea on the troubleshooting, but don’t always have enough Spanish to explain.