↓
Home→Peru→Lima, time to be a tourist

Sunday in Lima, time to be a tourist. 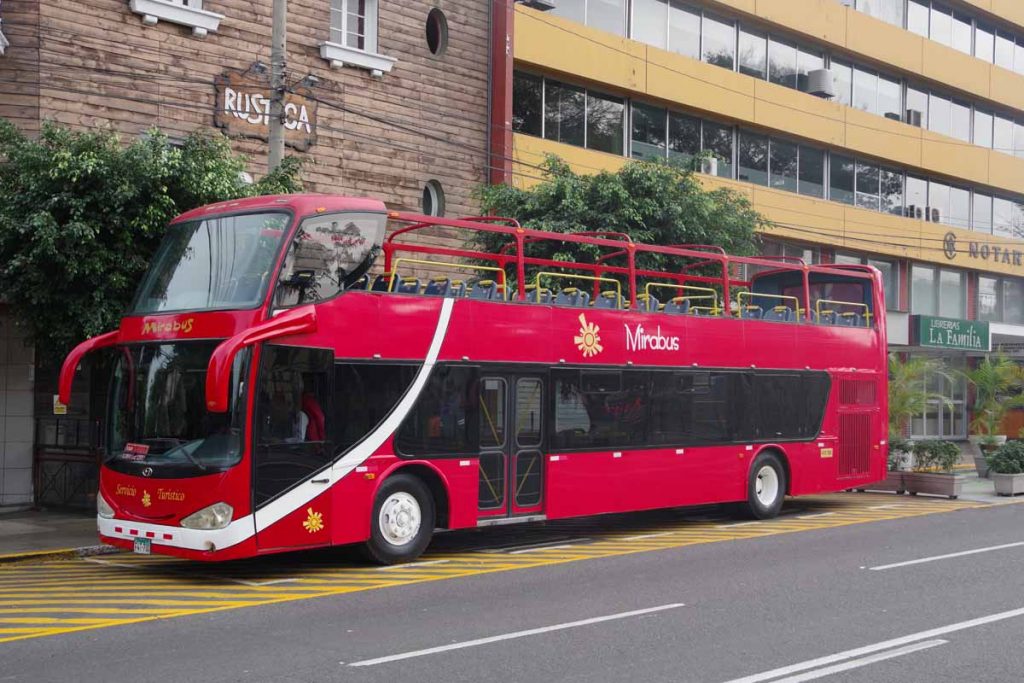 I walked to the nearby square and signed up for a half-day tour of the historic center of Lima on the Mirabus pictured above. It was a nice chance to see a little bit of the city with the highlight being the Church and Monastery of San Francisco along with the catacombs found underneath. 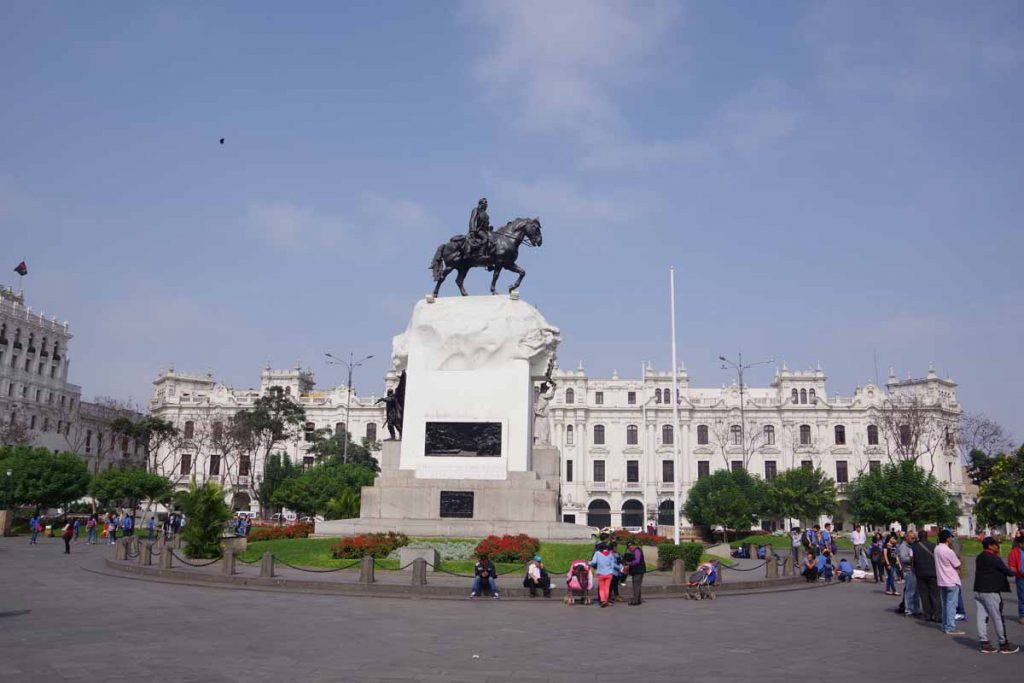 As our tour bus went past several squares including Plaza San Martin, pictured above, I thought they sure looked familiar as I had cycled right past.

The last Sunday of each month, roads in the center of Lima are closed to automobiles to allow bikes, roller blades, pedestrians and others to use them. We also walked from here for rest of the tour. 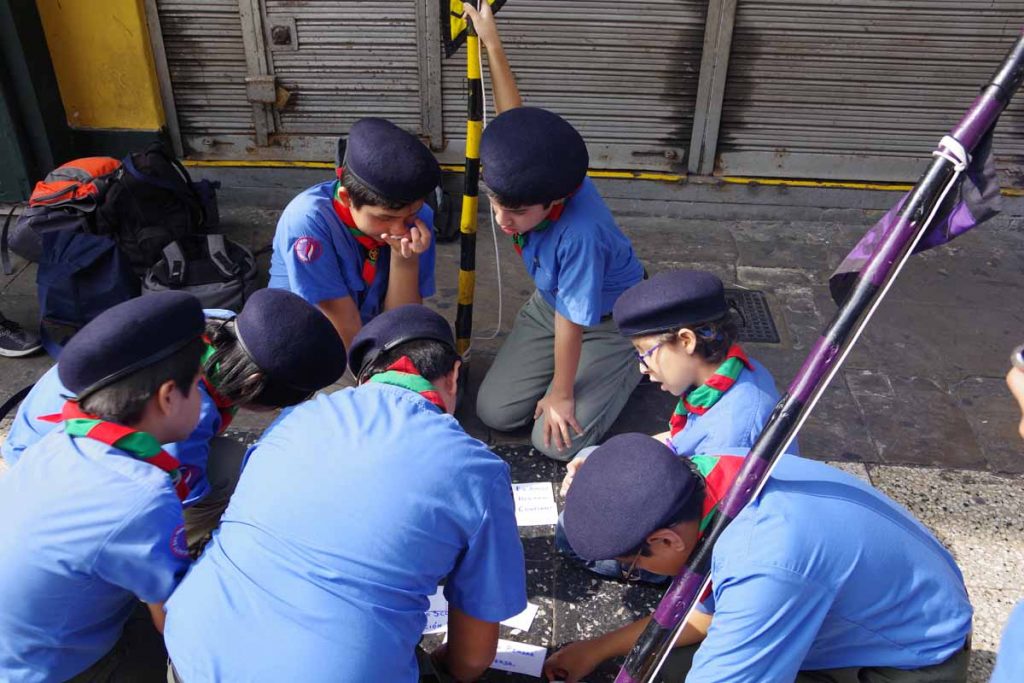 I saw quite a few local scout groups out in uniform. They seemed to be in some sort of organized scavenger type hunt where they visited different locations, got clues and put together puzzles. 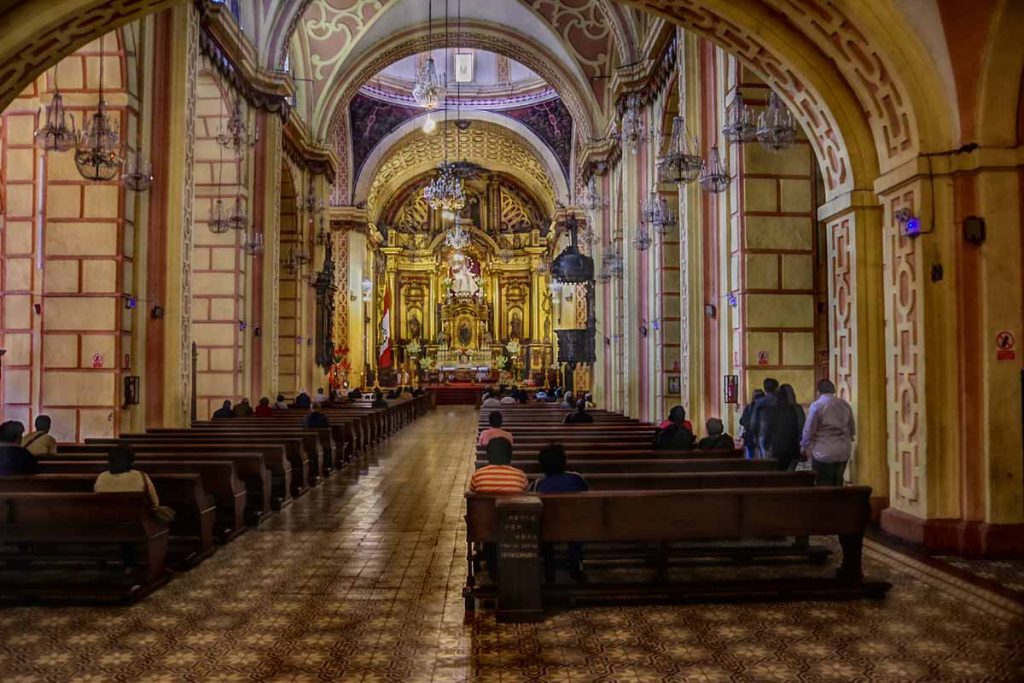 Church of La Merced was on our way, this photo in HDR. 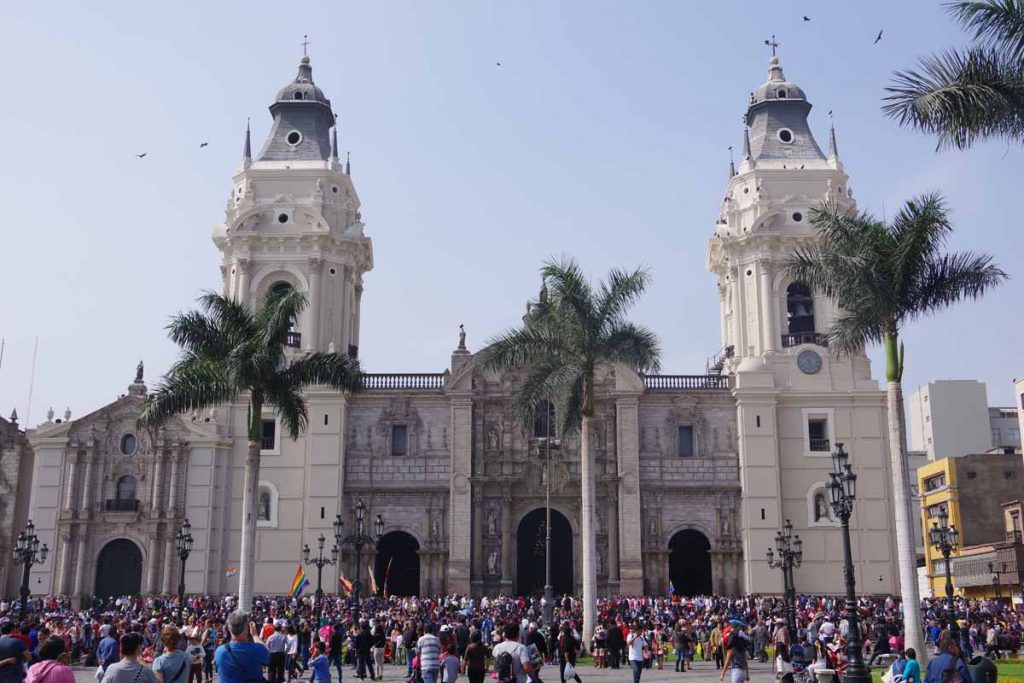 The main plaza was packed with people. 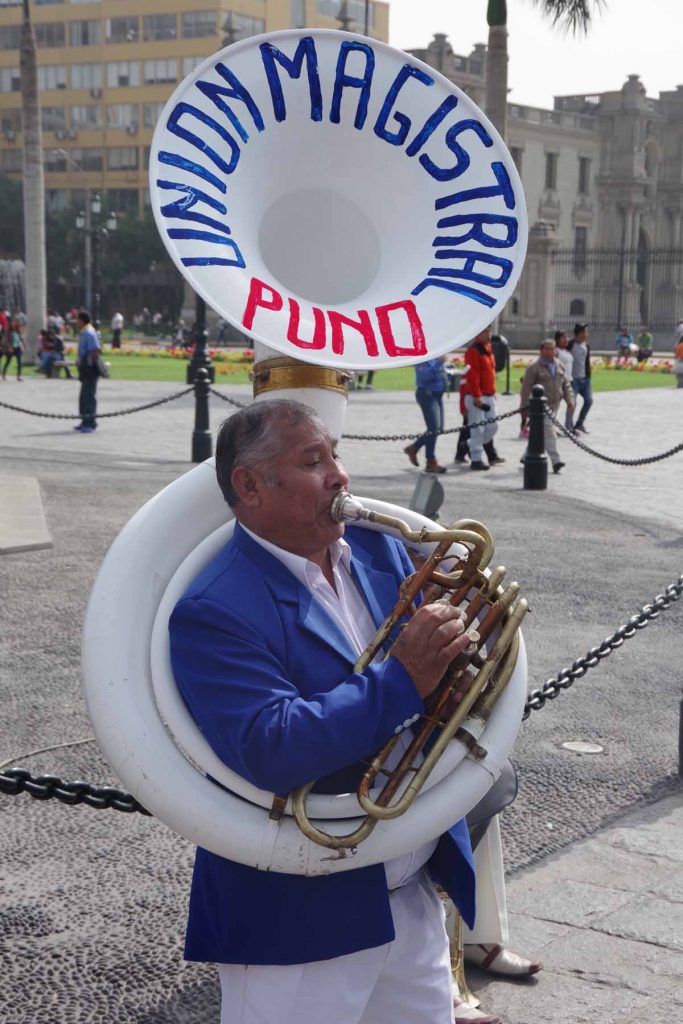 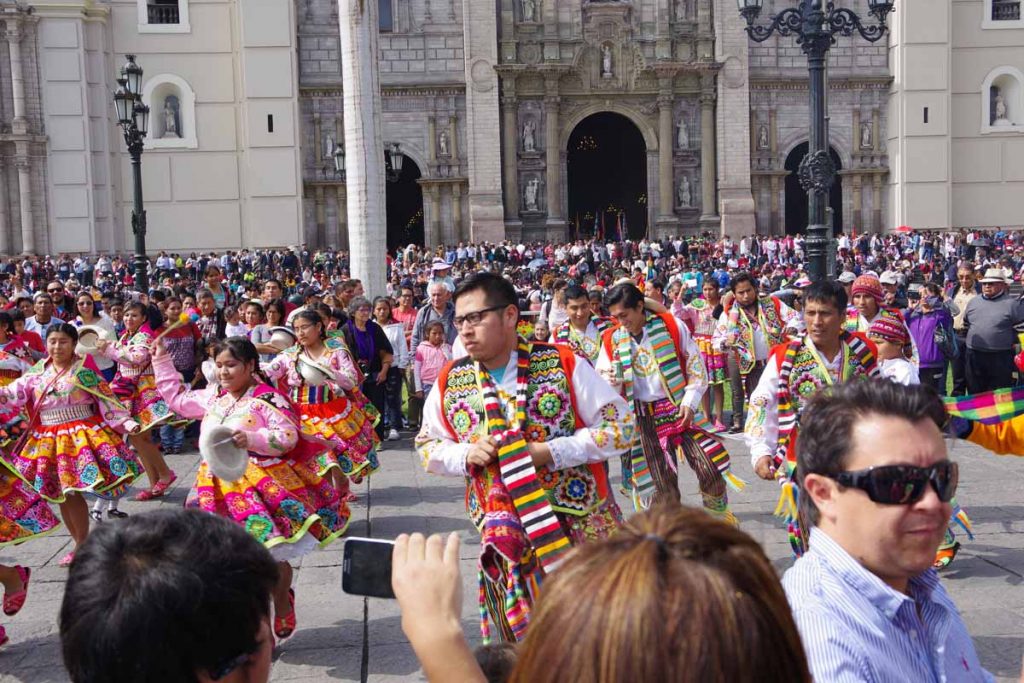 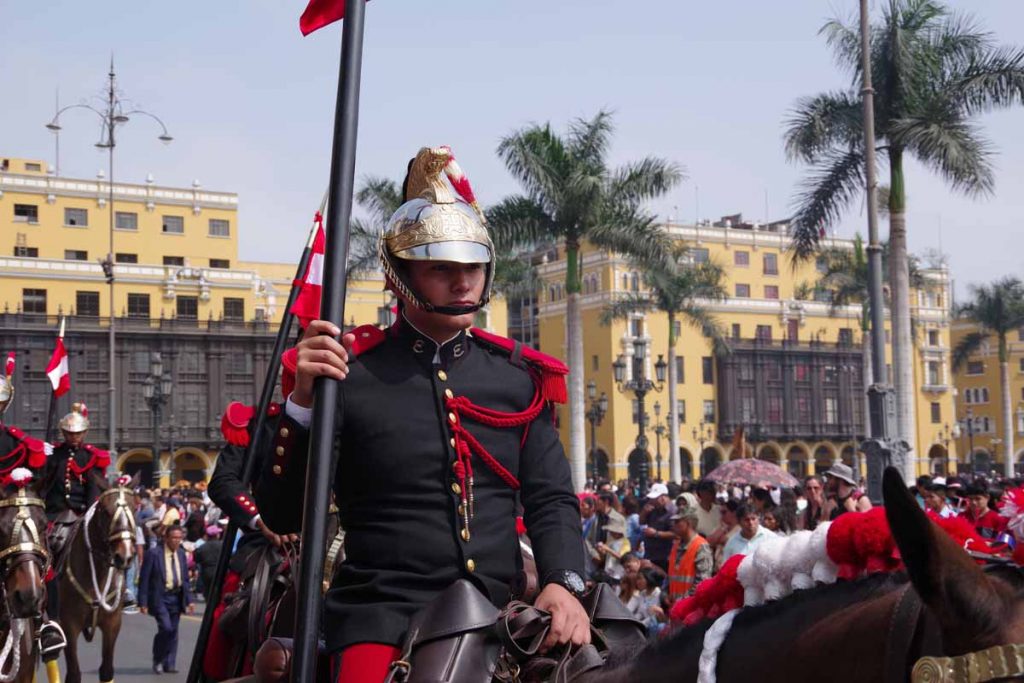 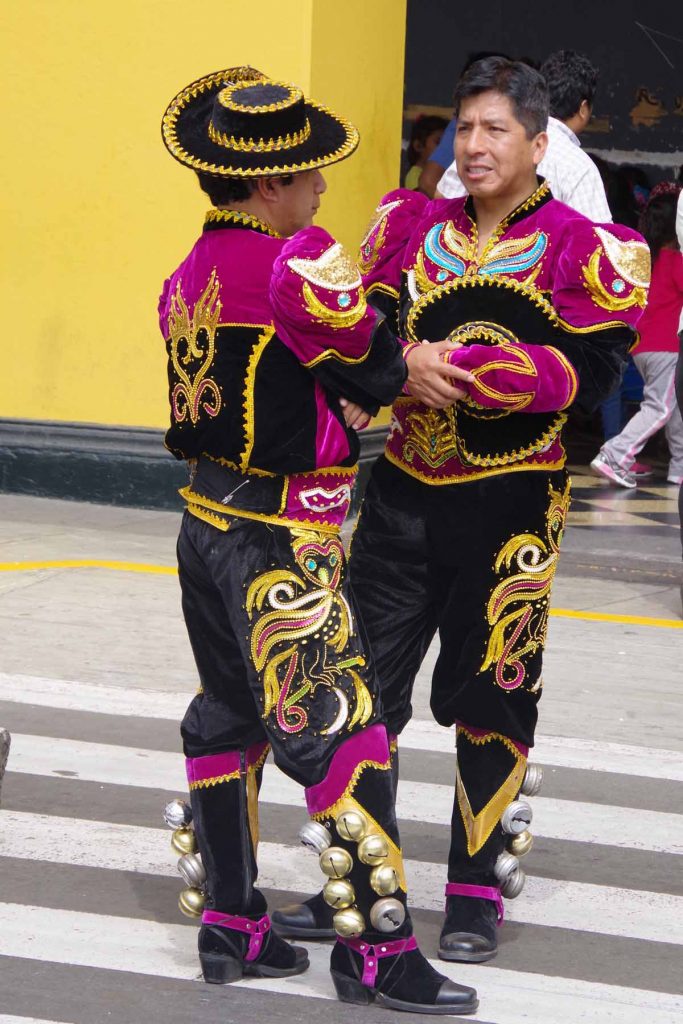 and just hanging out with friends, 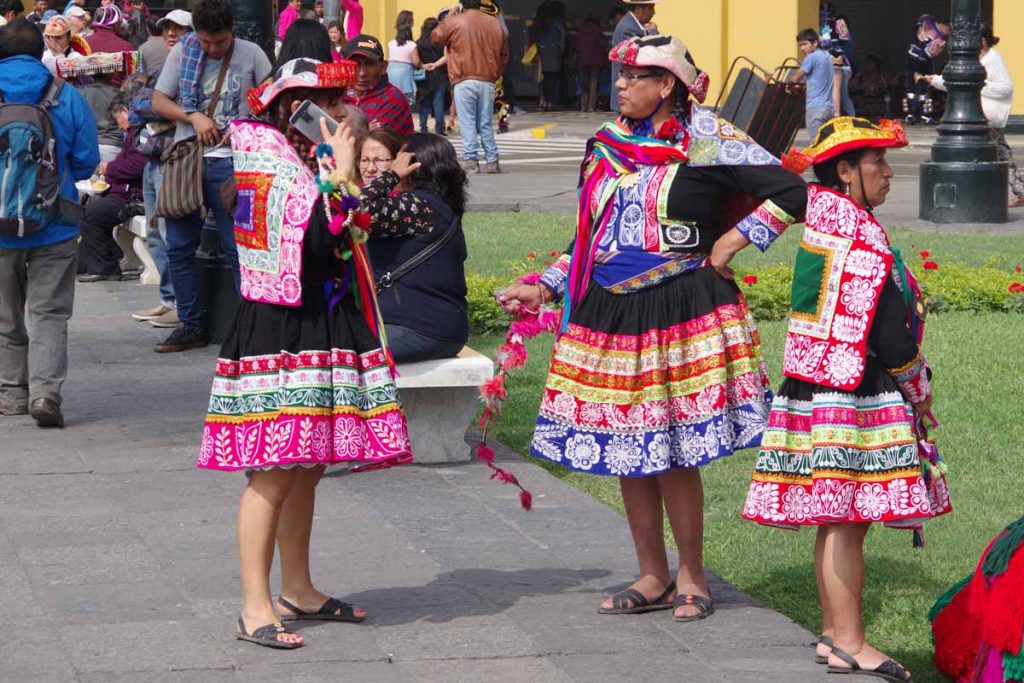 in traditional costumes or on the phone. 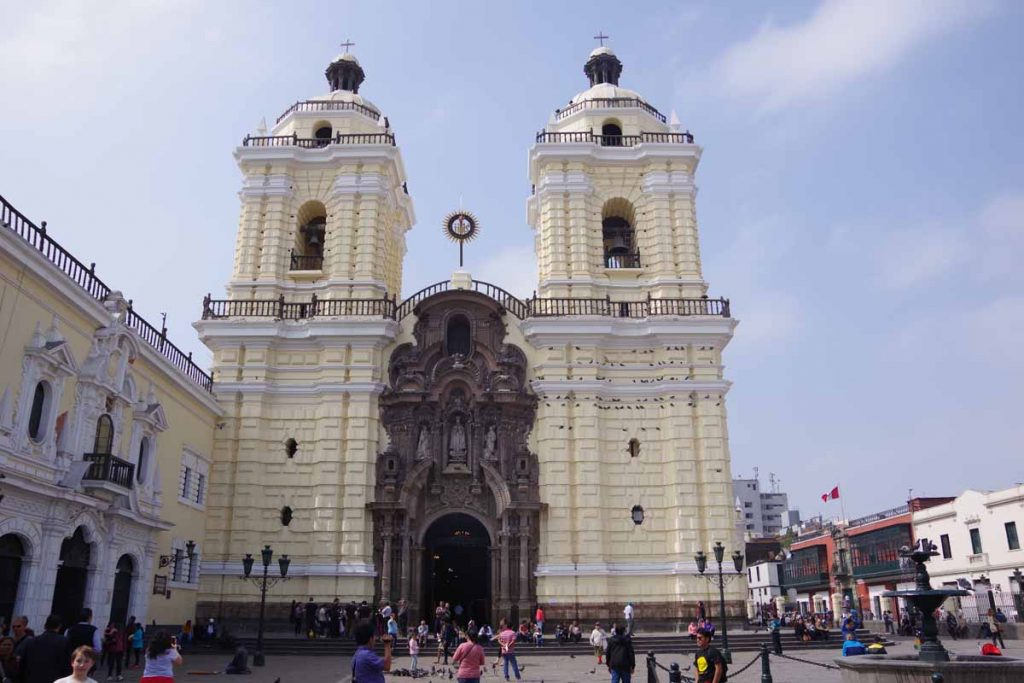 Church of San Francisco and associated monastery was impressive. 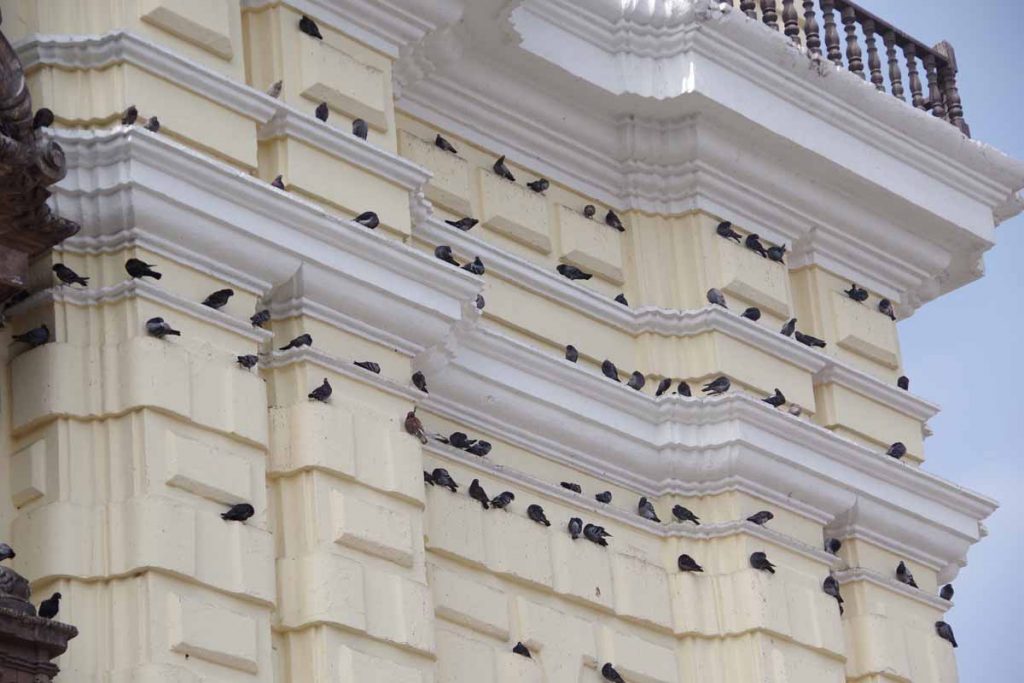 By the way, the black spots are pigeons. 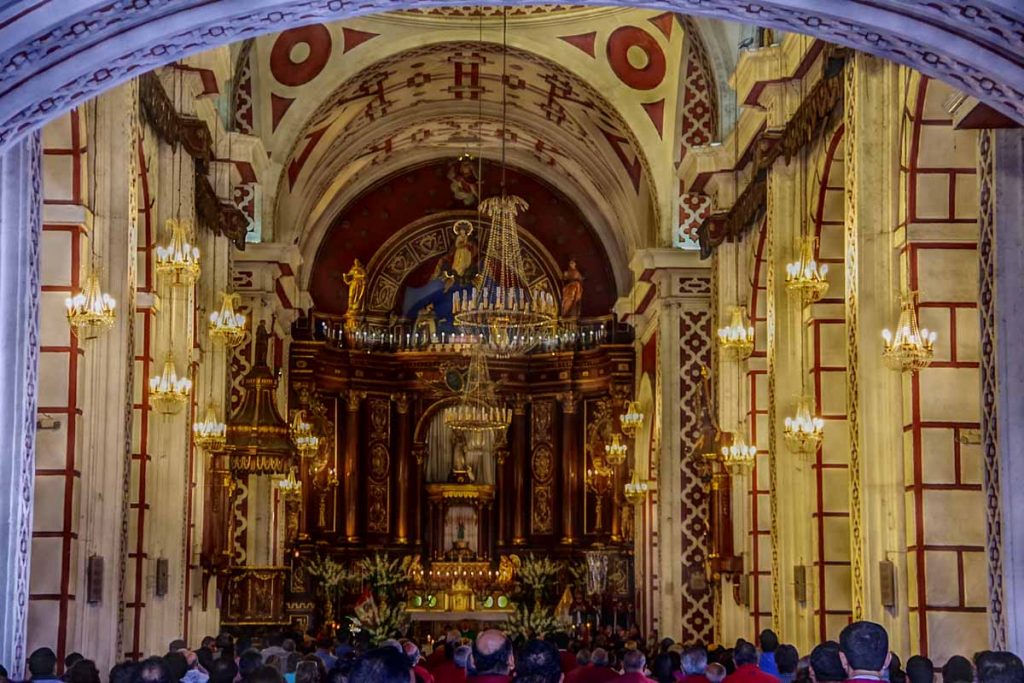 We could take photos inside the church. However, no photos of the monastery or catacombs underneath.

What was particularly impressive was the paintings and artwork in murals, ceilings and in paintings. There was a historic library with 25,000 dusty books that might remind one of Harry Potter. Underneath, there were narrow catacombs with many bones, often neatly sorted into skulls in one bin, tibias in another, etc. Overall a rather interesting visit. 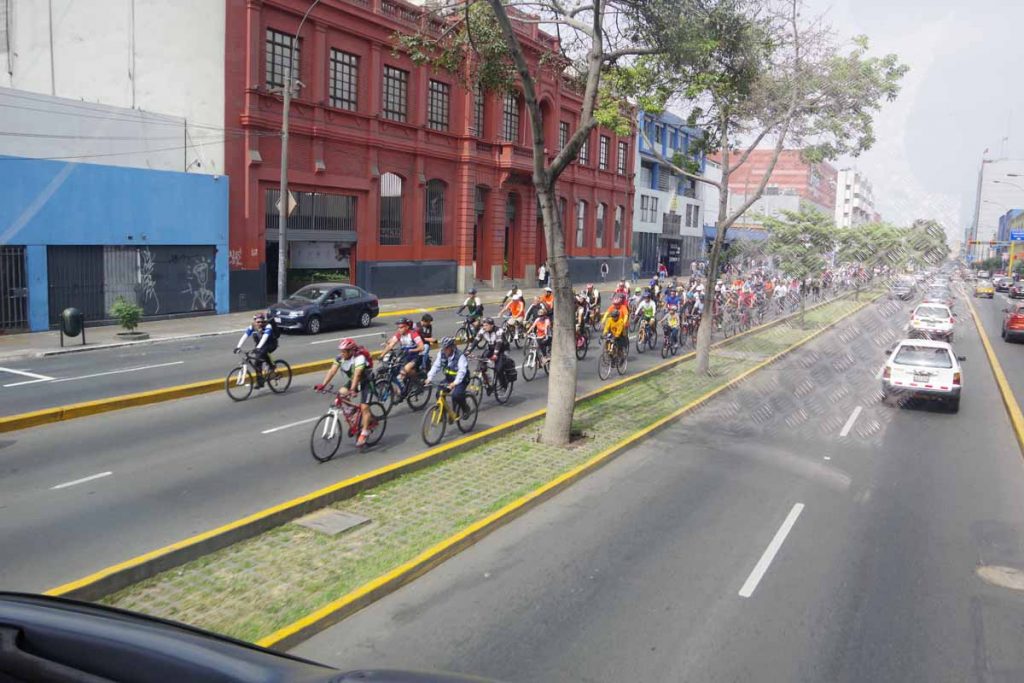 On way back, we could see streets were still closed for some cyclists. 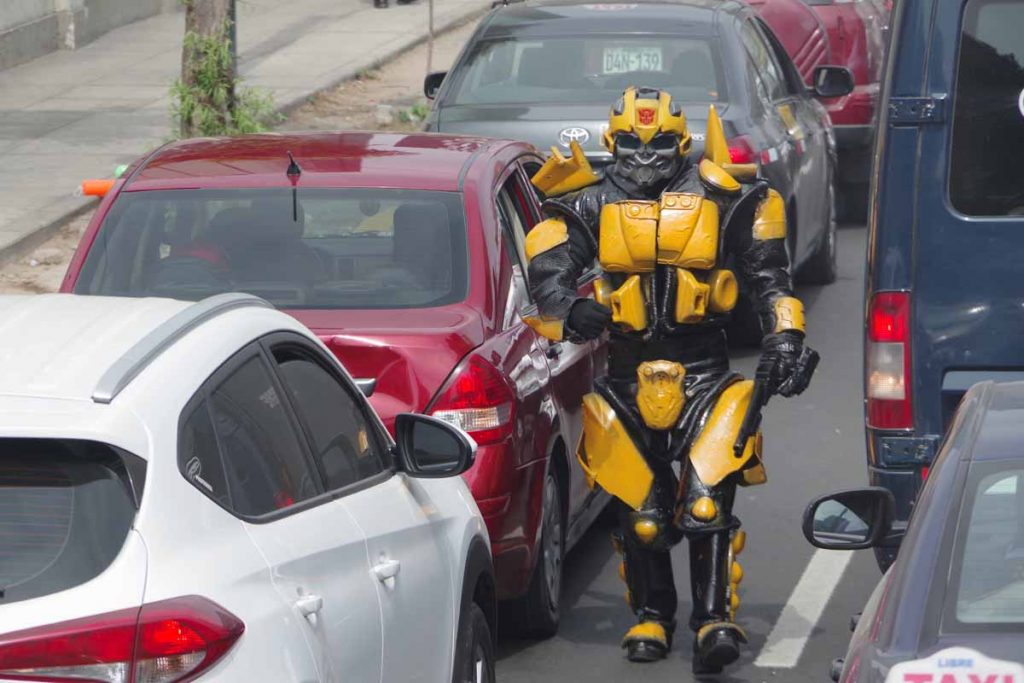 Hopefully, tomorrow won’t get stuck into too much traffic leaving, having missed my window of light traffic. Even today this intersection was stopped up often enough that someone could come in costume and go past the cars. 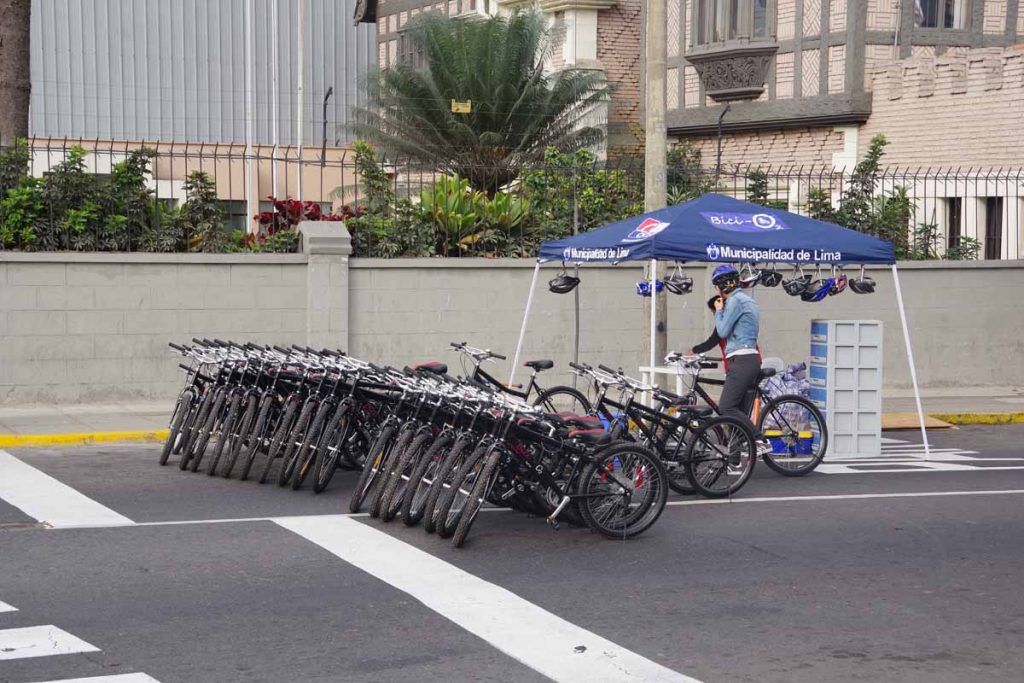 A photo of bikes for rent during the traffic-free morning. 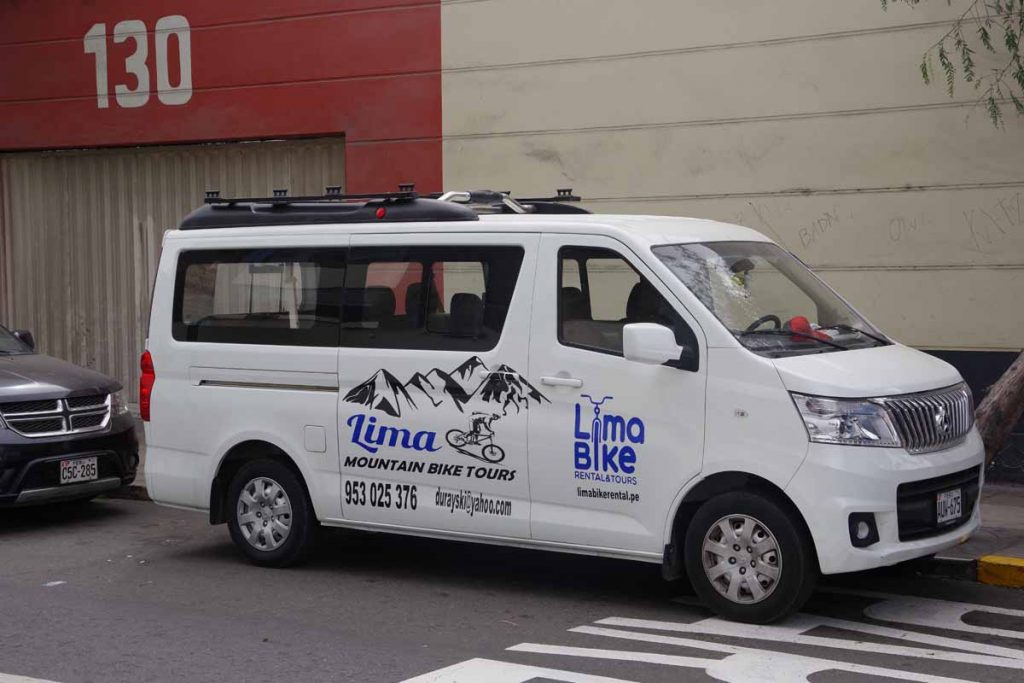