On the road again as I depart the big city and head south from Lima. 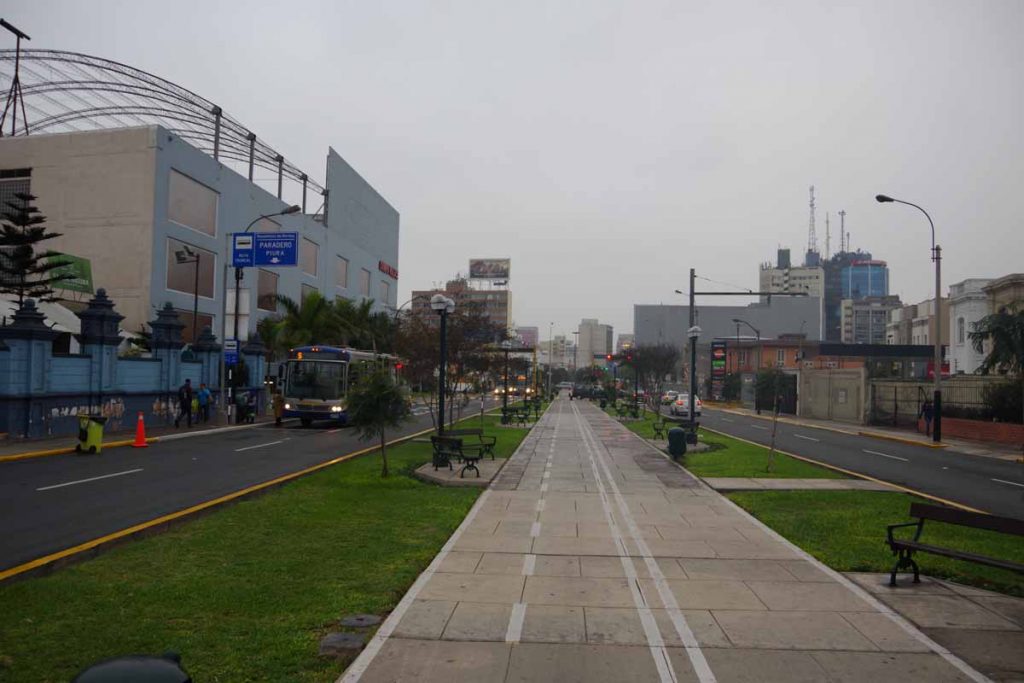 Several kilometers of stopped up traffic, but otherwise getting out of Lima wasn’t too bad.

I started on the bike path for first several kilometers. Miraflores has done a good job with these paths including having them on one-way streets but allowing bicycles to go both directions. 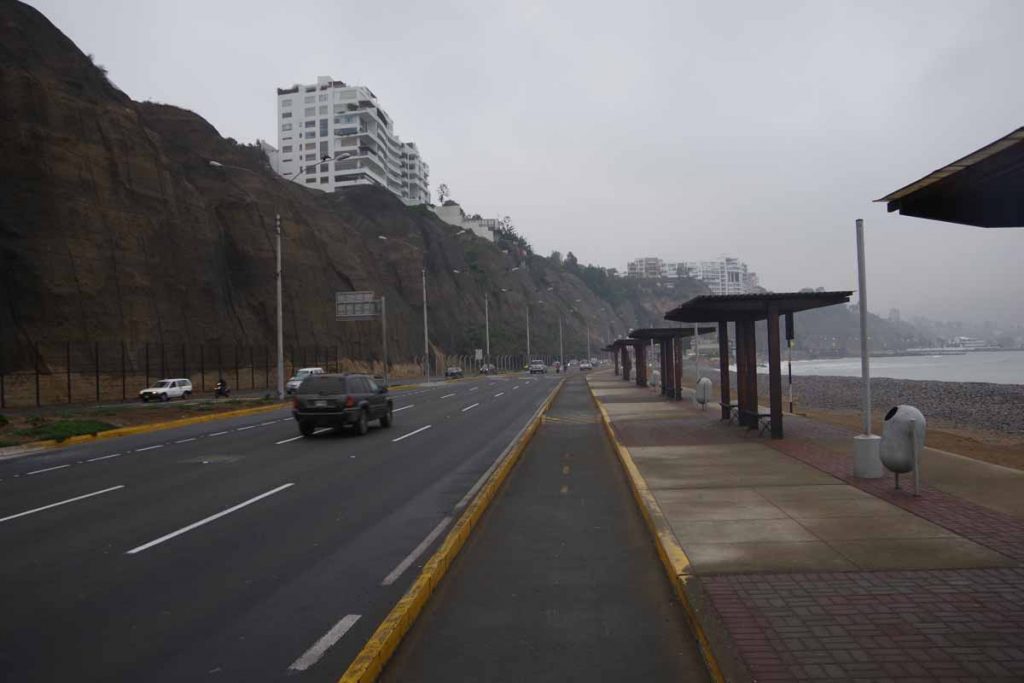 Leaving Lima, I had a bit of everything. Not long after the bike path, I descended into a high-speed highway. It merged with another highway and had fun getting across the lanes. Not long thereafter this bike path appeared on right side. 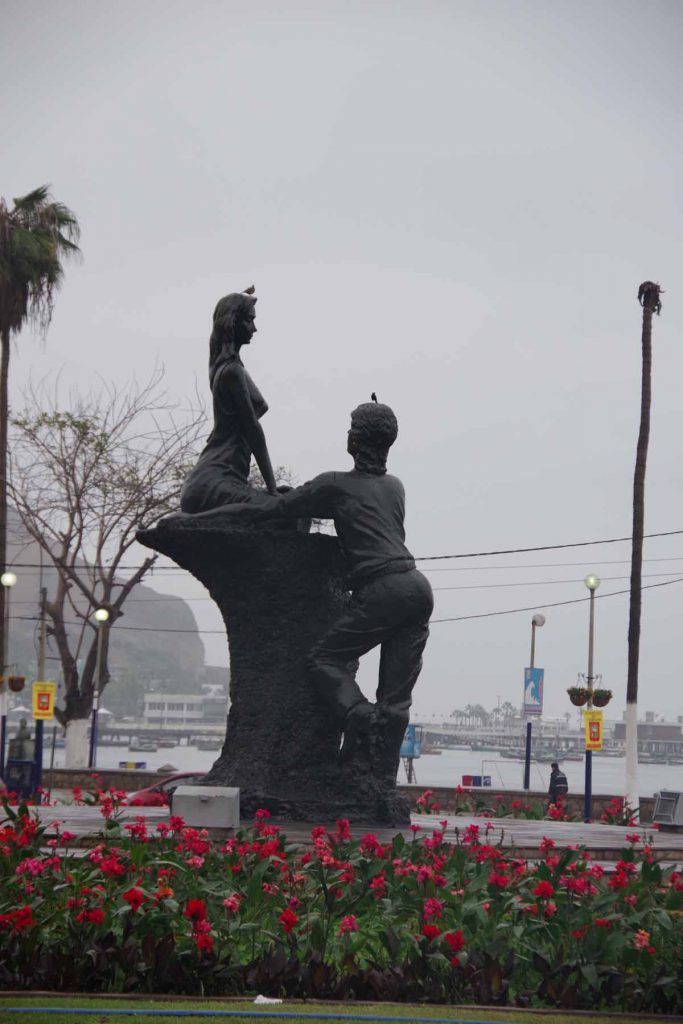 This was down by the ocean where I also found this statue. Unfortunately, discovered I had to climb back out again. This next bit was the most crowded with almost 10 kilometers of a mixture of stop-and-go as well as a very busy crowded road. Once again, many of these little buses that would keep zooming in to stop and drop off or pick up passengers. 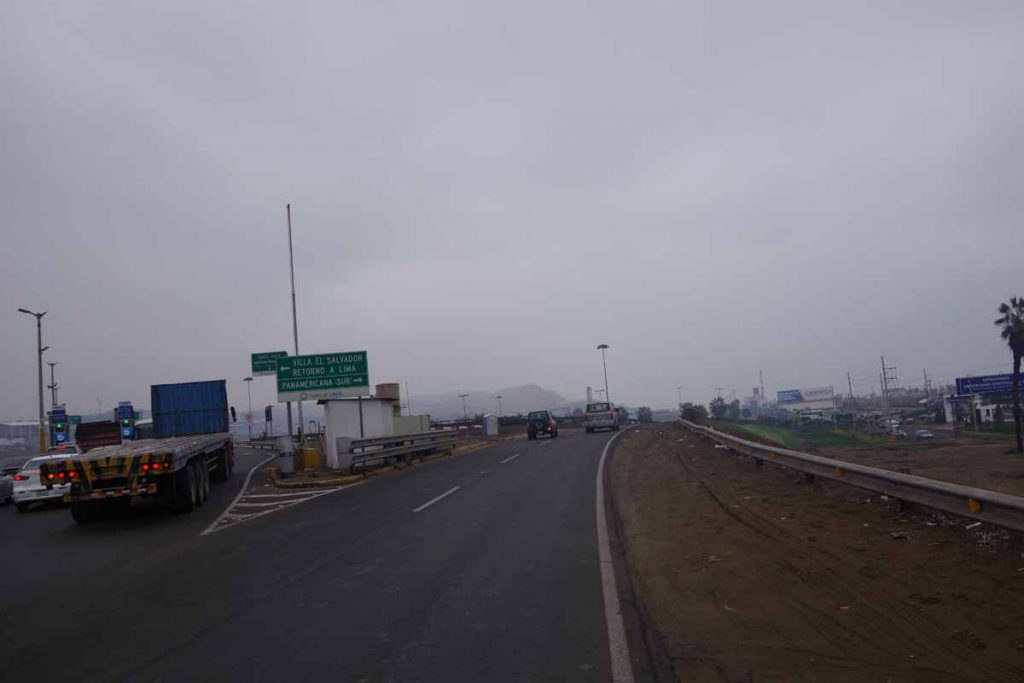 At 15 kilometers I rejoined the Pan American Highway and shortly thereafter there was a toll booth. Not the most exciting road, but it has a good shoulder and reasonable direction. It started very busy with four lanes each direction and a lot of traffic, but over the next 20 kilometers, the traffic volume decreased considerably as the lanes also dropped down to two each way. Stopped at the 34-kilometer mark for a short break. 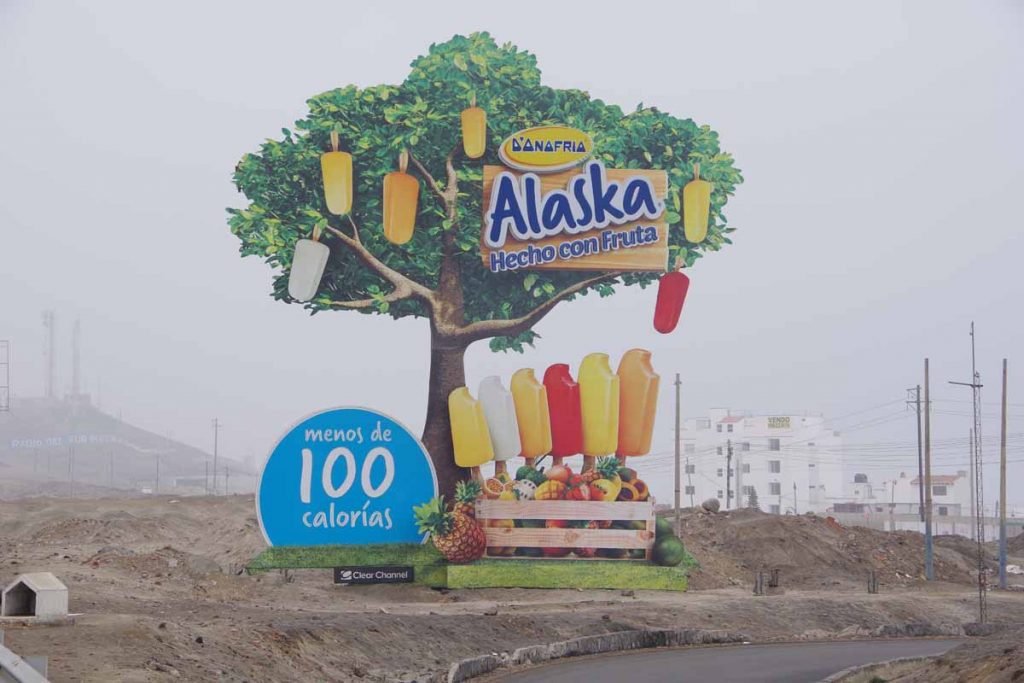 There were some fun billboards here, including many they had adjusted the shapes of the sign to match the product. 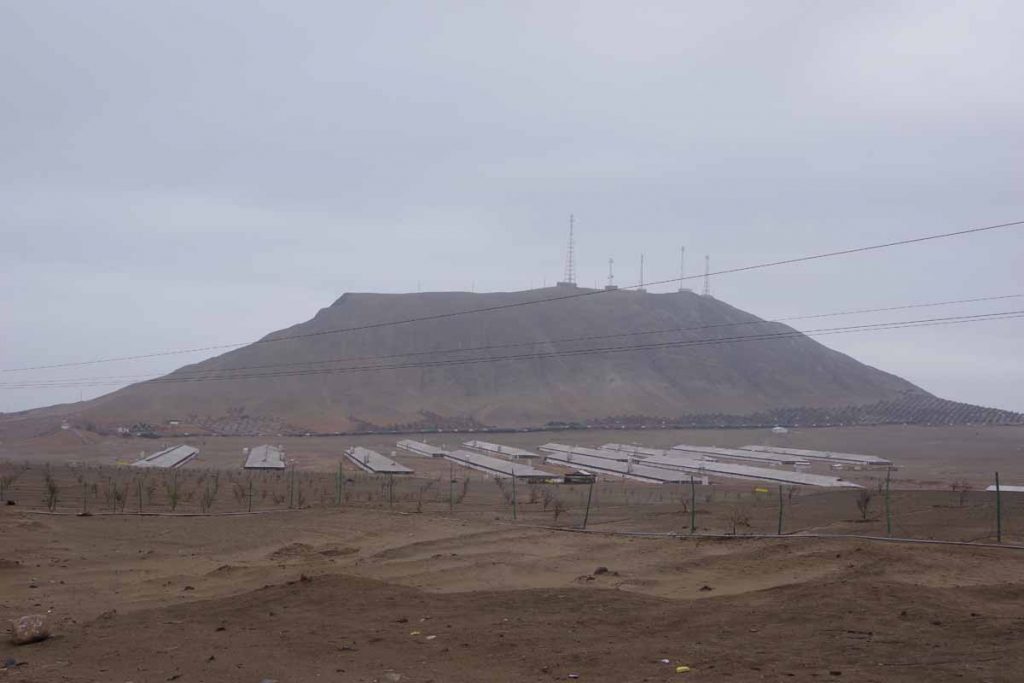 I came past more of these chicken farm tents. This time I was downwind from the tents and could definitely smell the manure. 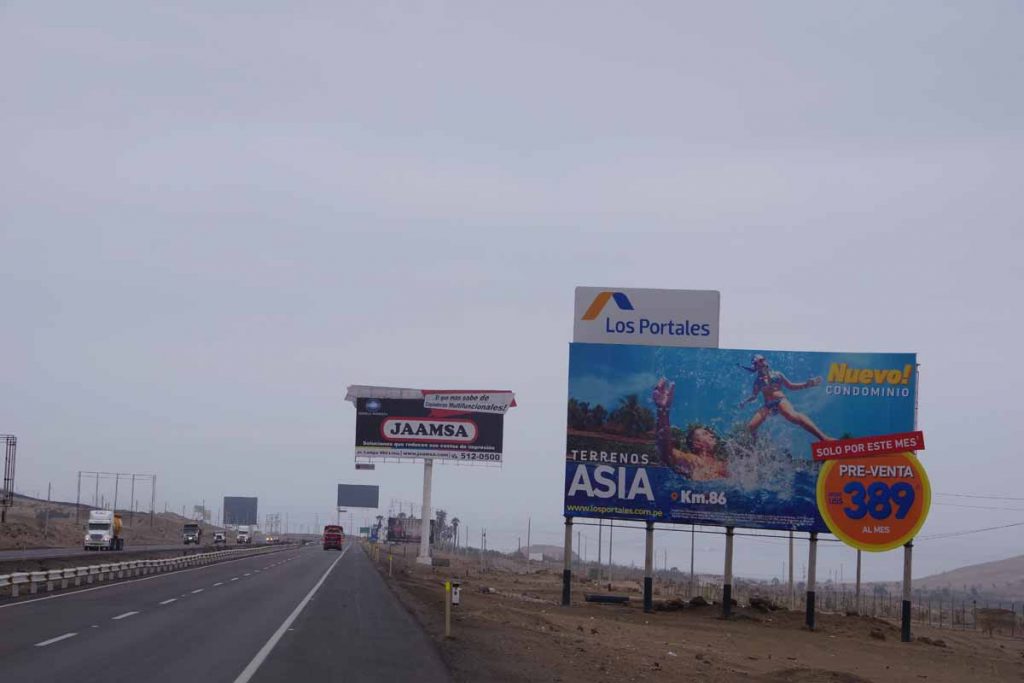 Also multiple of these small communities where they were selling lots as well as condominiums. The 389 per month catches your eye, but I noticed multiple weasel words here including (1) “desde” = from (2) it is in US dollars, not Peruvian sol and (3) it tells you only for the first month. 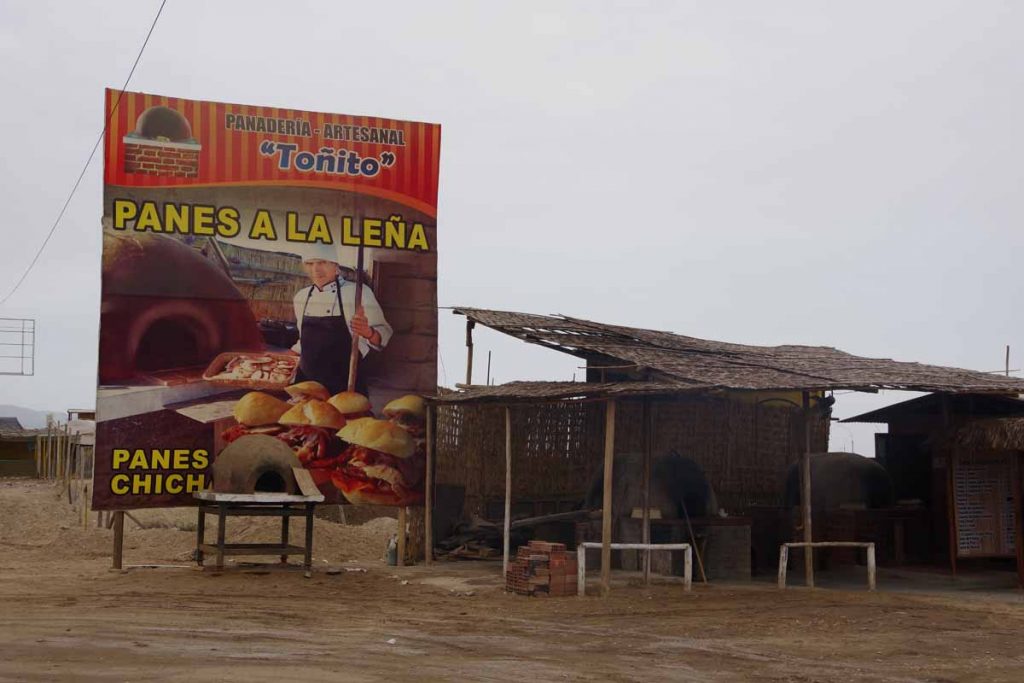 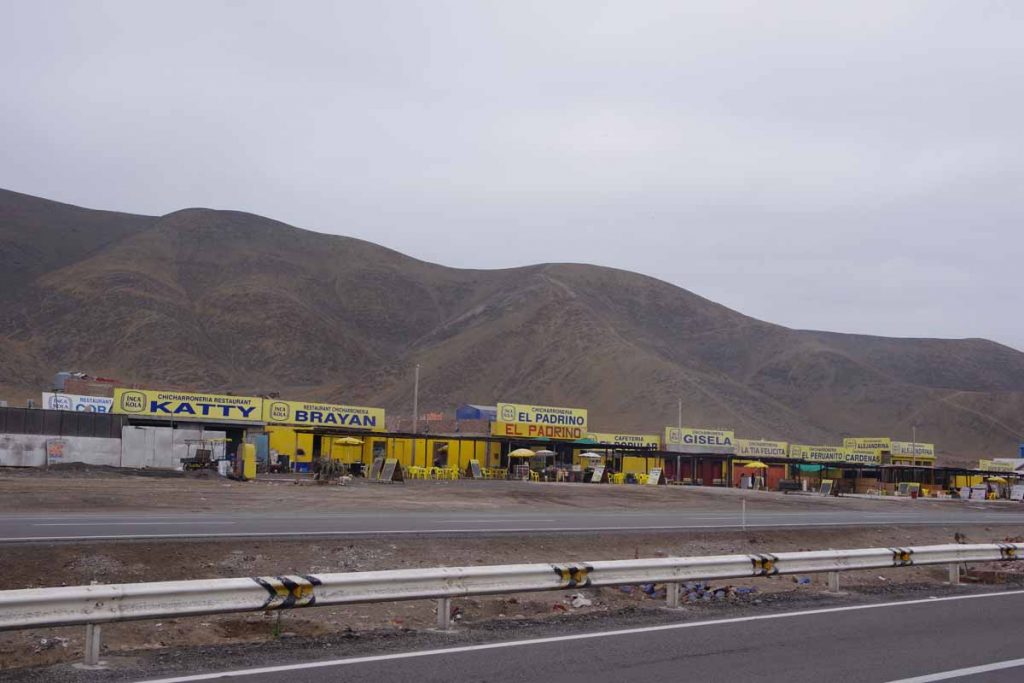 Many other possibilities along the way as well. 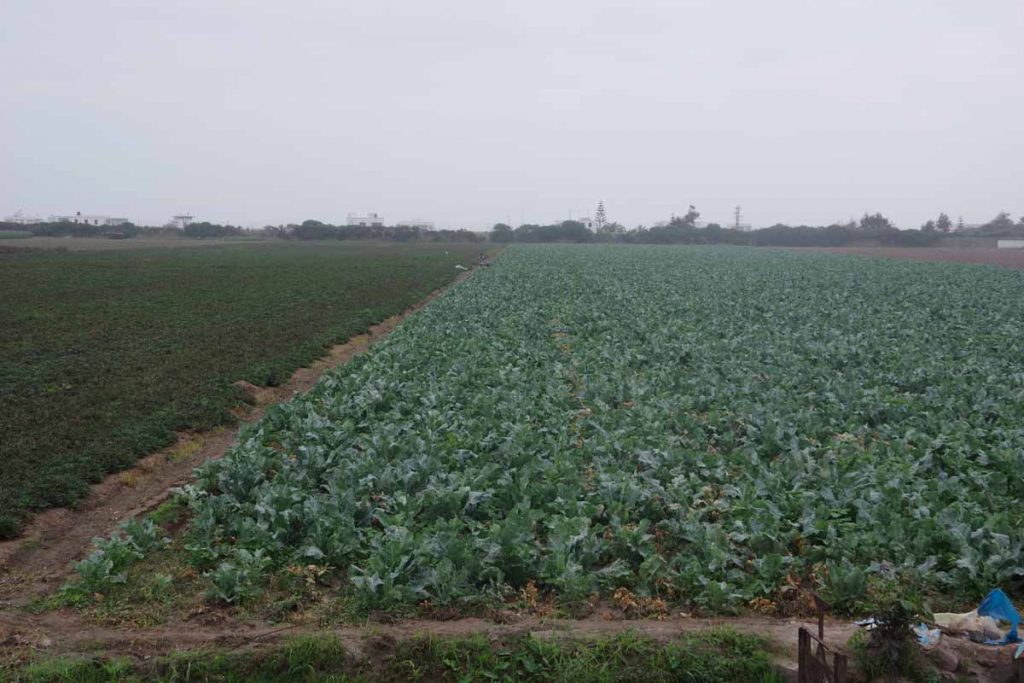 There wasn’t a lot, but I did come past some agricultural fields as well. Overall, the day was overcast all day long. The streets even started out wet. I expect not necessarily much rain but a heavy mist today. 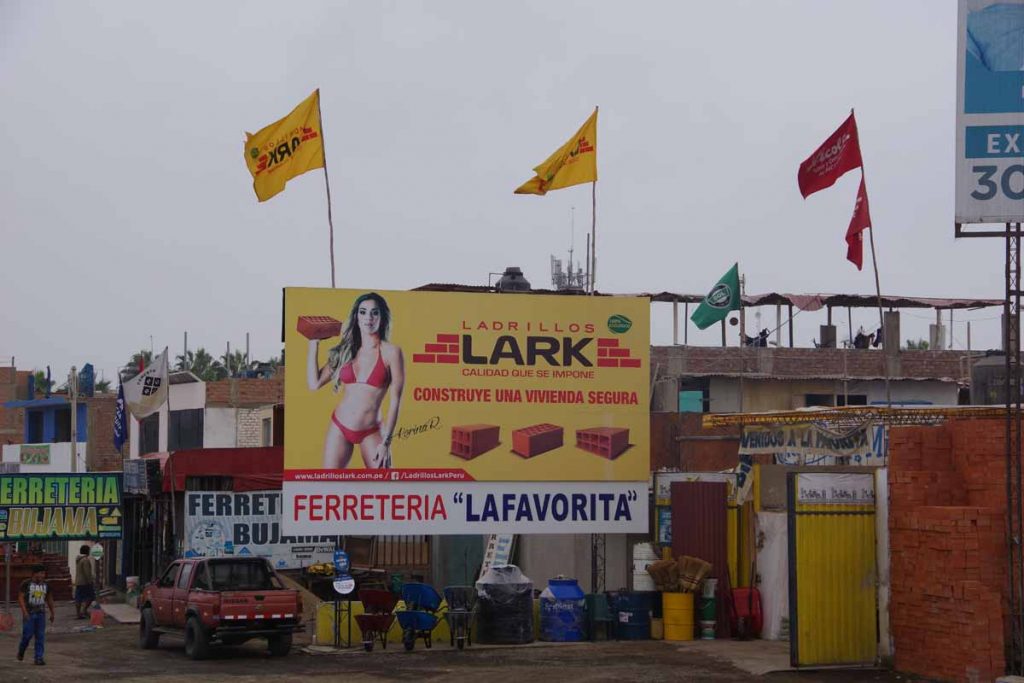 I am not sure what a woman in a bikini has to do with bricks. However, I will admit it did get me to take a photo of the sign.

I considered stopping at 64km where I knew there was a hotel but pushed on further to Asia at 96km. It was sort of a strange place. There was a large wall surrounding a mall complex. There was a sign for a hotel that said, open all year. I first cycled around part of the outside of the wall, but couldn’t find it. Next, I went to a gate in the wall. Guards told me the hotel was open, but when I visited it, they looked closed and said they had no rooms.

Next, made my way across the highway to a different hotel. No hot water but otherwise a reasonable place. Also found a restaurant but not much in way of store here to get breakfast items.

Nice to be on the road again.