Two days riding has brought me to the mining town of Oruro.
Day One
Like Wyoming? Sometimes when I’m cycling through a new area, I’ll be reminded of places more familiar. Parts of todays route on the divided highway somehow reminded me of I-25 through desolate stretches of Wyoming. 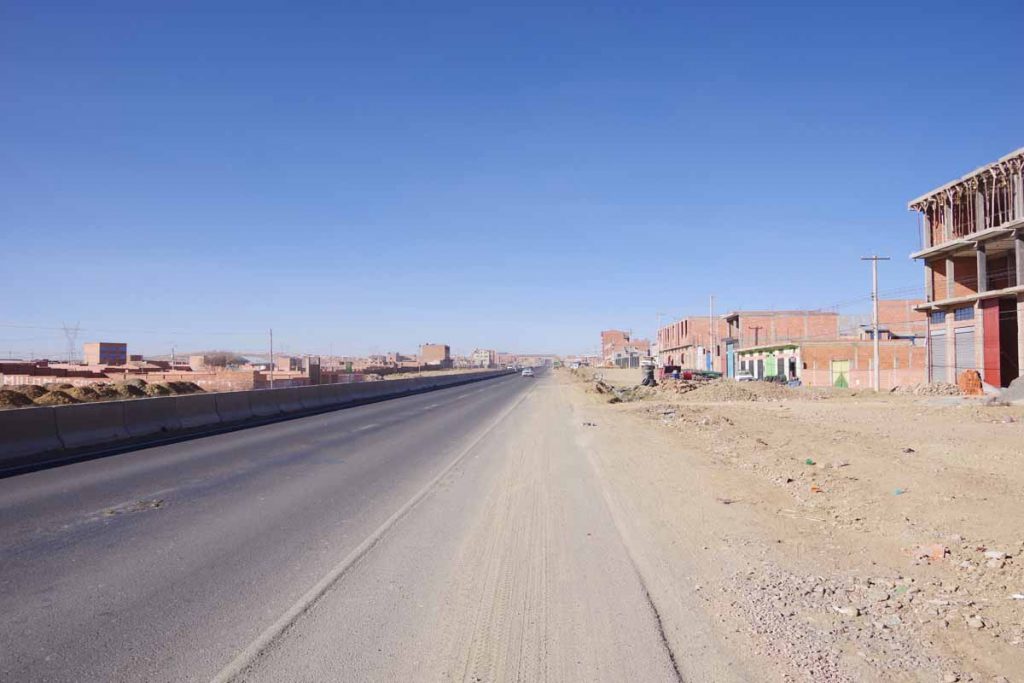 Breakfast in the hotel and then packed everything up. Somehow my rear view mirror was missing. Not critical, but would be handy particularly this morning as the first 10km were leaving the bustle of El Alto. After about 15km, it looked like above with most of the town behind me. 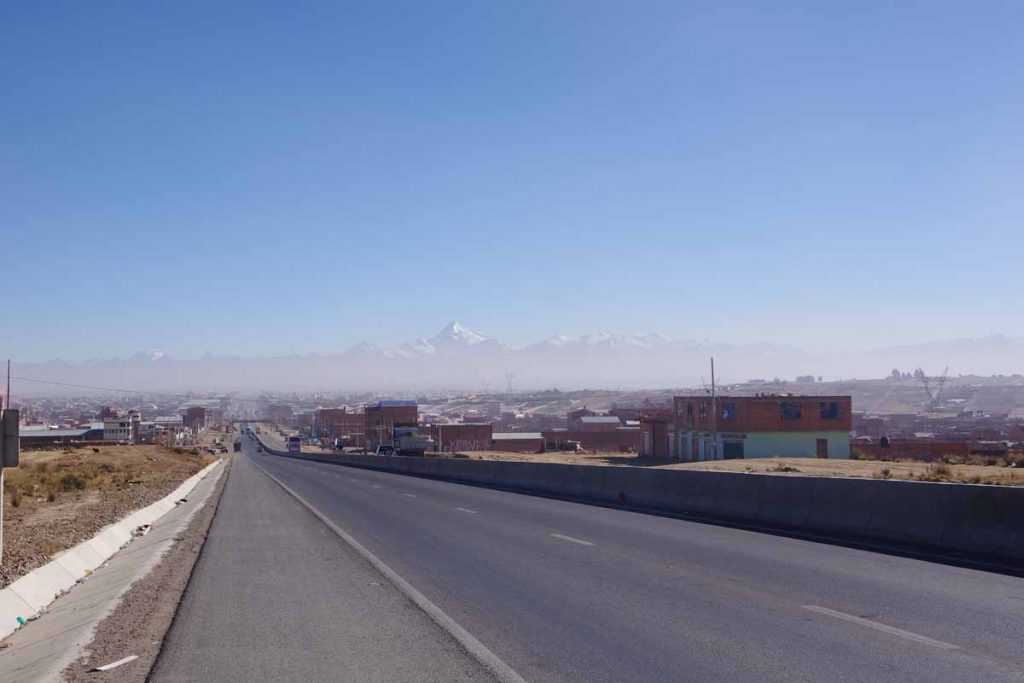 I climbed a small rise and here was the view looking back towards El Alto and La Paz. 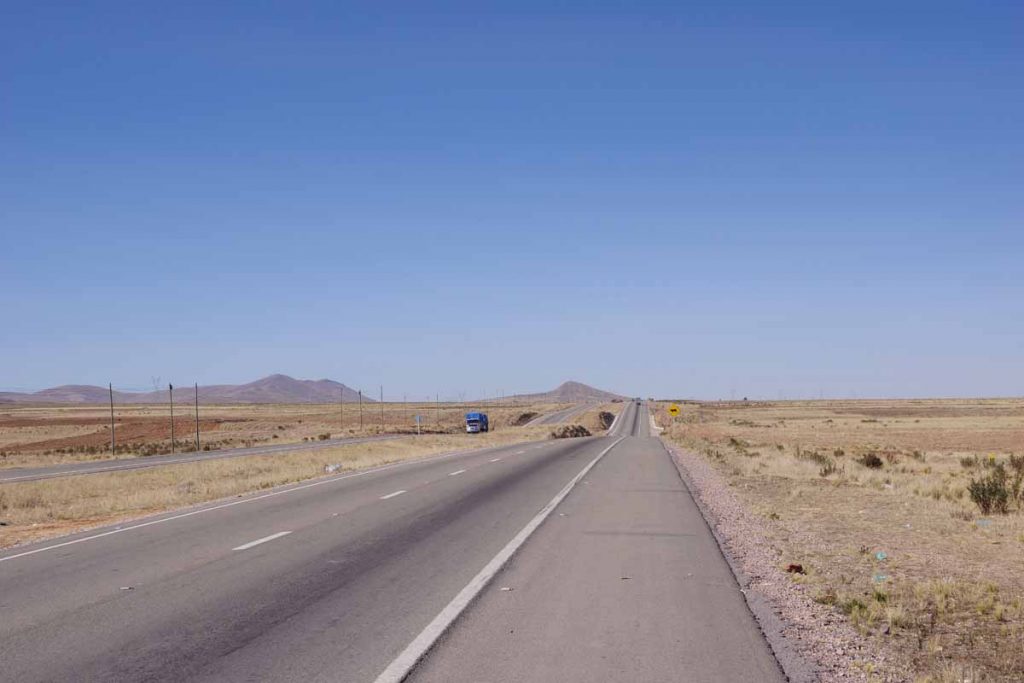 Here was one of those views that reminded me of Wyoming.

The route today was almost entirely on a divided highway. There were occasionally small hamlets, though not many of them had much in way of shops or other services. 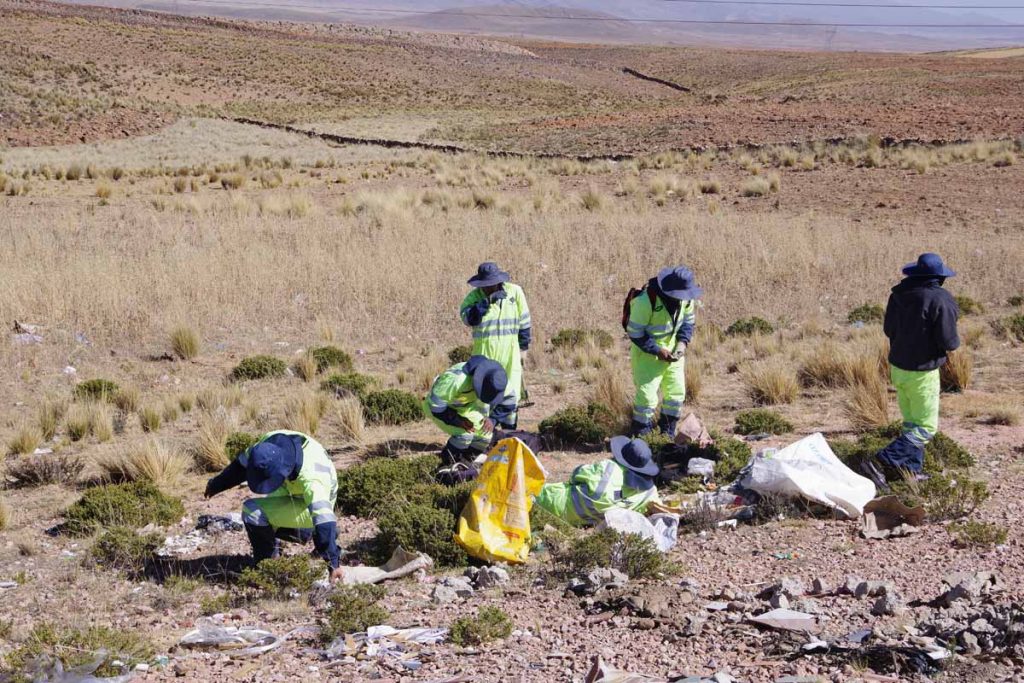 These cleanup workers were all sitting down, though by time I had my camera out, they were already getting up. 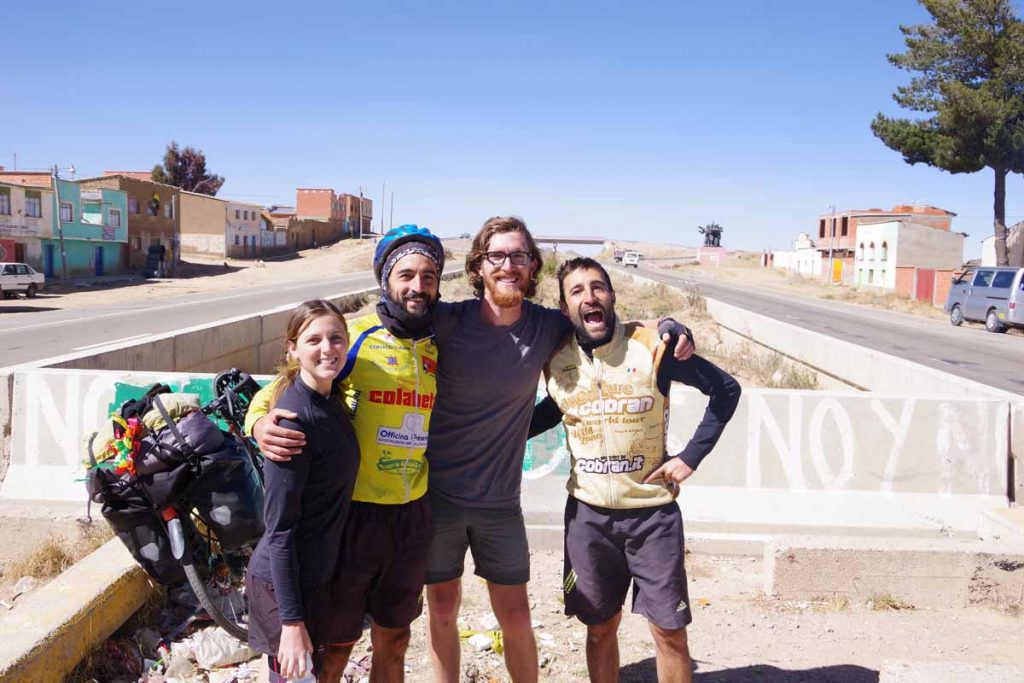 At 40km, I met this mix of Italian and American cyclists. The Italians had started in Vancouver, BC last year and were slowly making their way south as well. We traded information about the roads and potential choices. 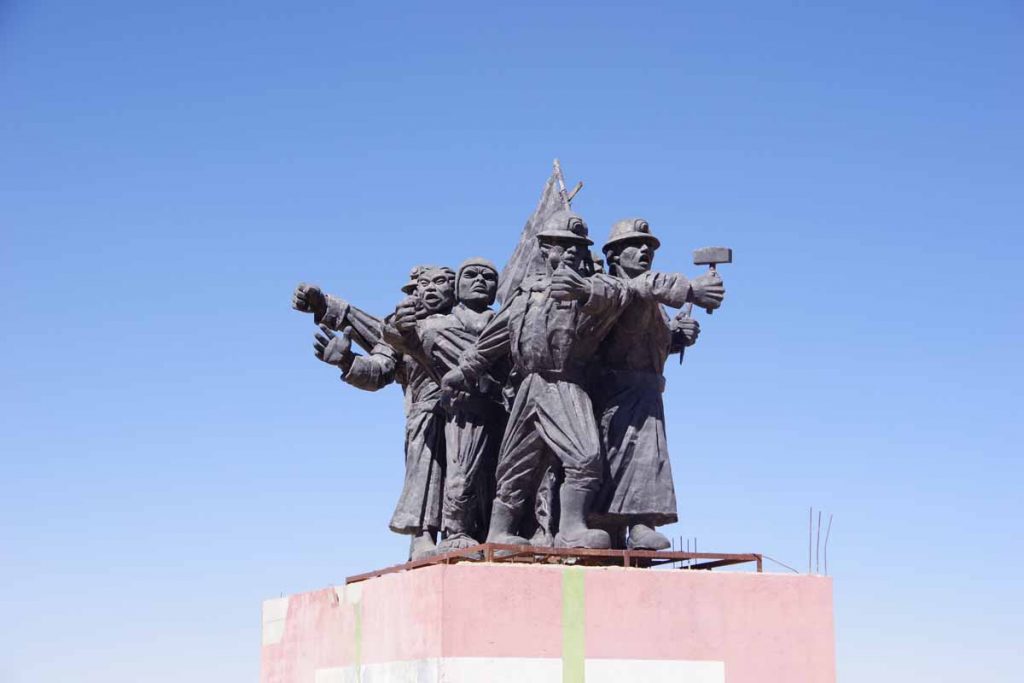 A monument as I was leaving this small settlement. 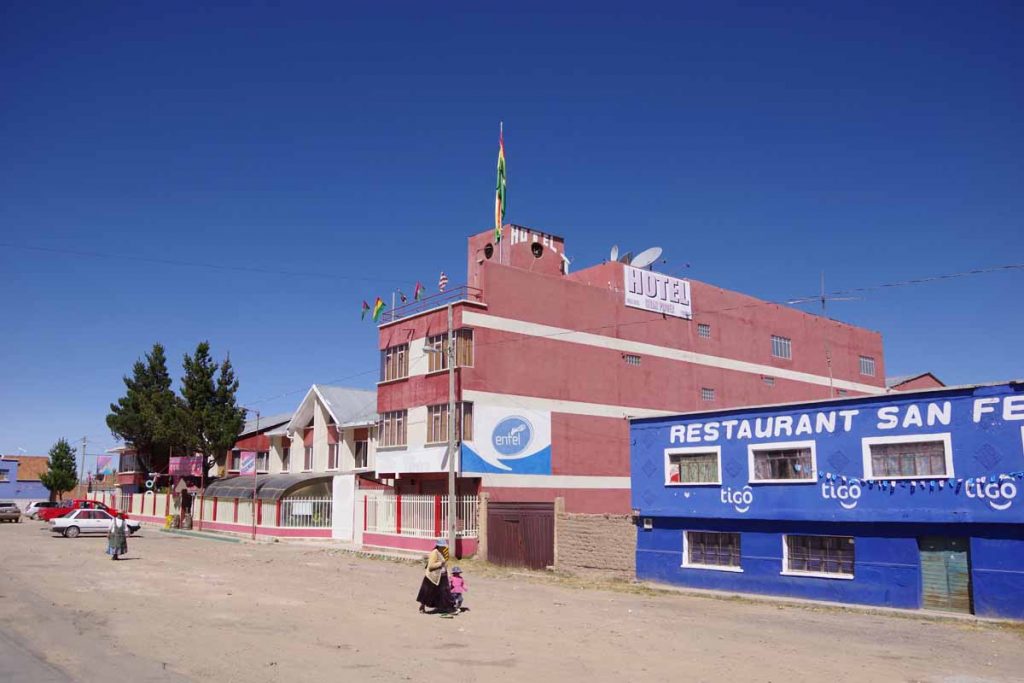 At 60km was small town of Tholar. It had this large hotel, with a reasonable looking restaurant as well as a small shop. Would have been a nice place to stay, though it was still early so decided to press on further. 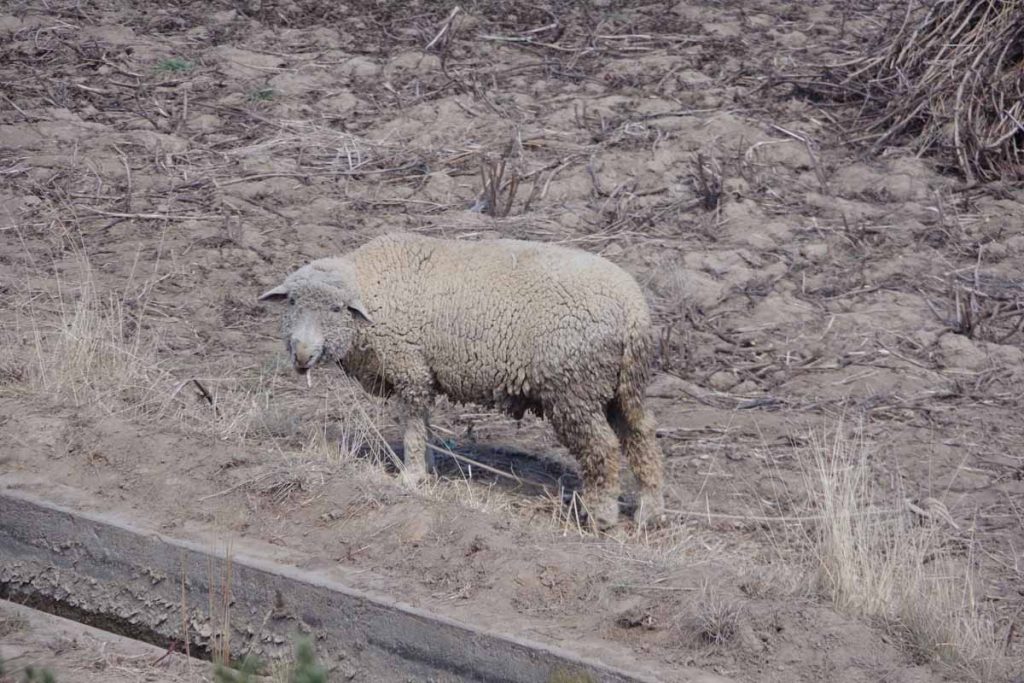 A sheep along the road. 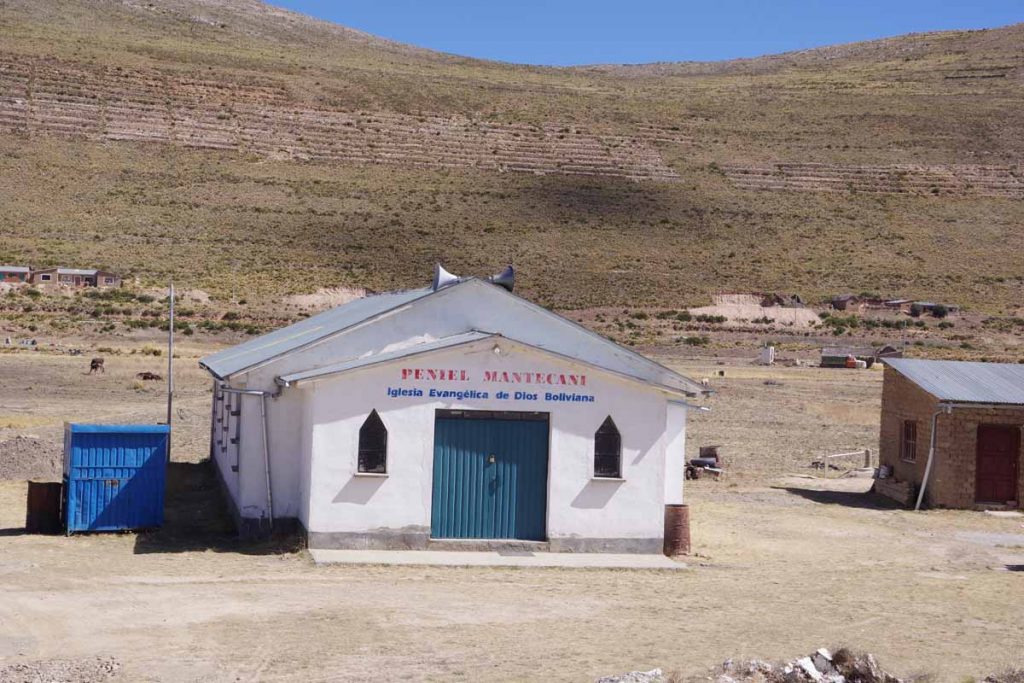 A church in one of the small settlements. 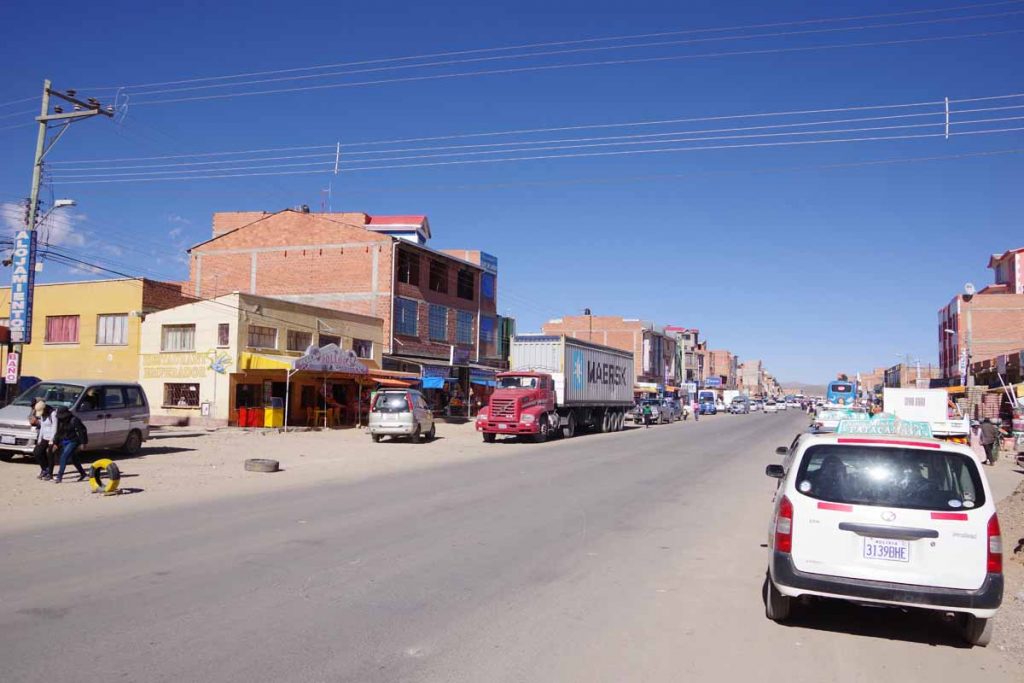 Downtown parts of Patacamaya. There were a number of different accommodation choices, though none caught my eye so I ended up on the far part of town. The place I picked turned out nicer than expected with a small courtyard behind the façade.

Walked back into center of town for a late lunch and otherwise settled in to this small community. No wifi but also didn’t expect it.

Day Two
Today a day with a lot of riding and not much stopping or taking photos. Entire day was back onto the divided highway until the last six kilometers into Oruro. 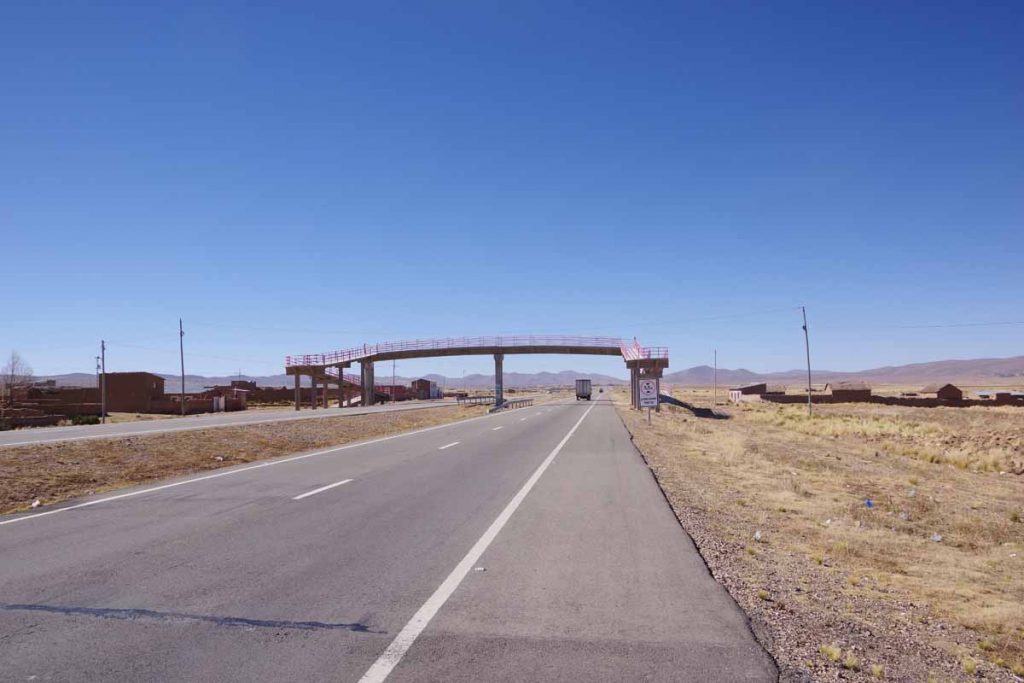 A lot of today looked like this. Not quite sure on these pedestrian overpasses since there isn’t much traffic on the road and sometimes I’ve seen pedestrians just walk across. The shoulder was nice and wide, though there was some debris. I may have a slow leak in the back tire as I pumped it up once and later it was low again. 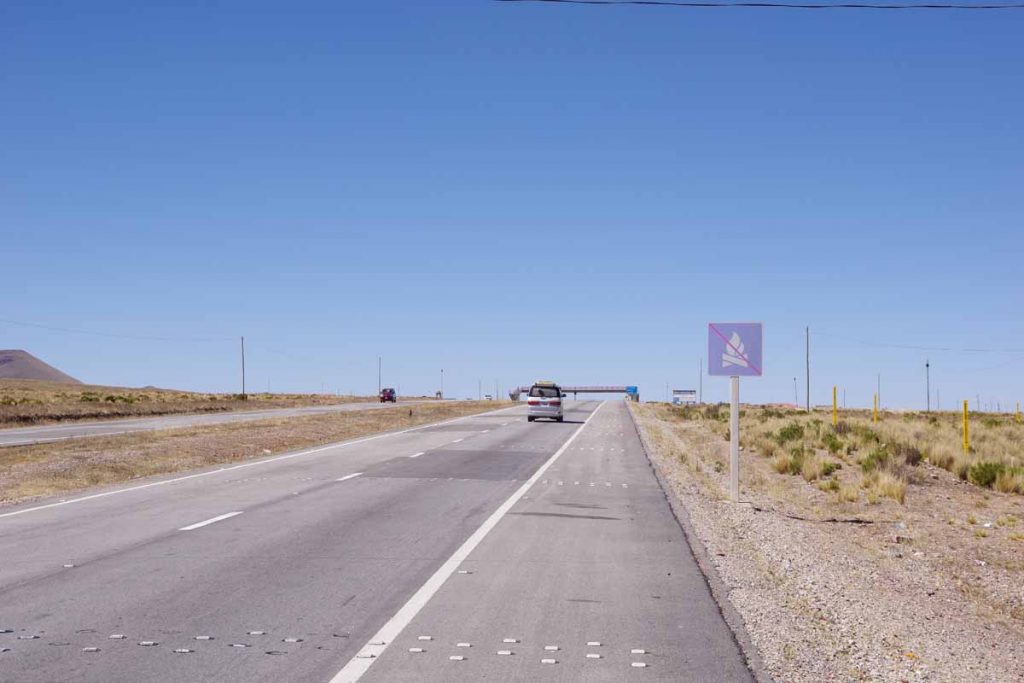 Not sure why there was a no burning sign.

Most days I’ll have one or two options thought in advance of where I might stay. I reached the first of these Konani at 46km in the morning. After this a solid climb and some headwinds, but still made good progress and I was near Caracollo at 90km by 1pm. This had been my intended stopping point but realized I could also make it to Oruro by continuing on. 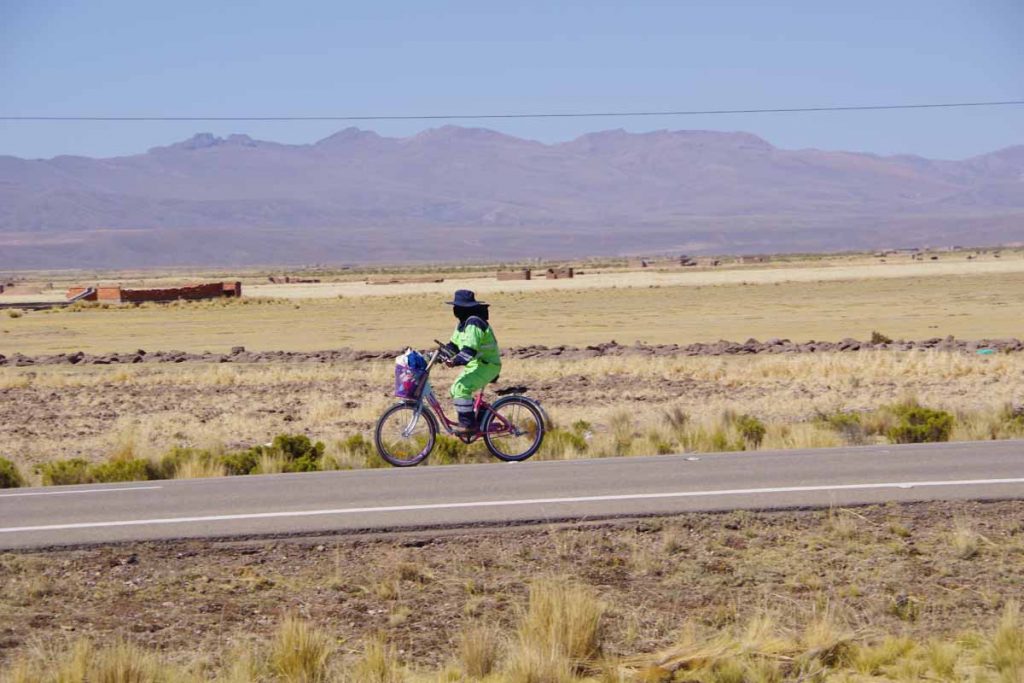 This road worker riding his bike back from assignment. 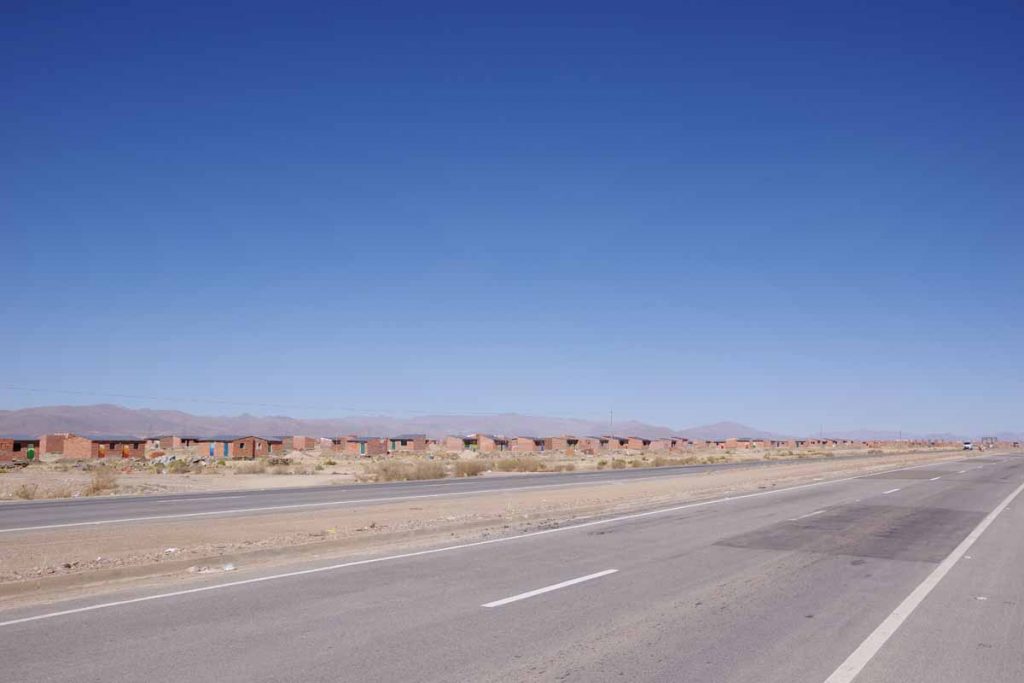 Not far from Oruro, there were all these small little buildings. I didn’t see many people associated with them. 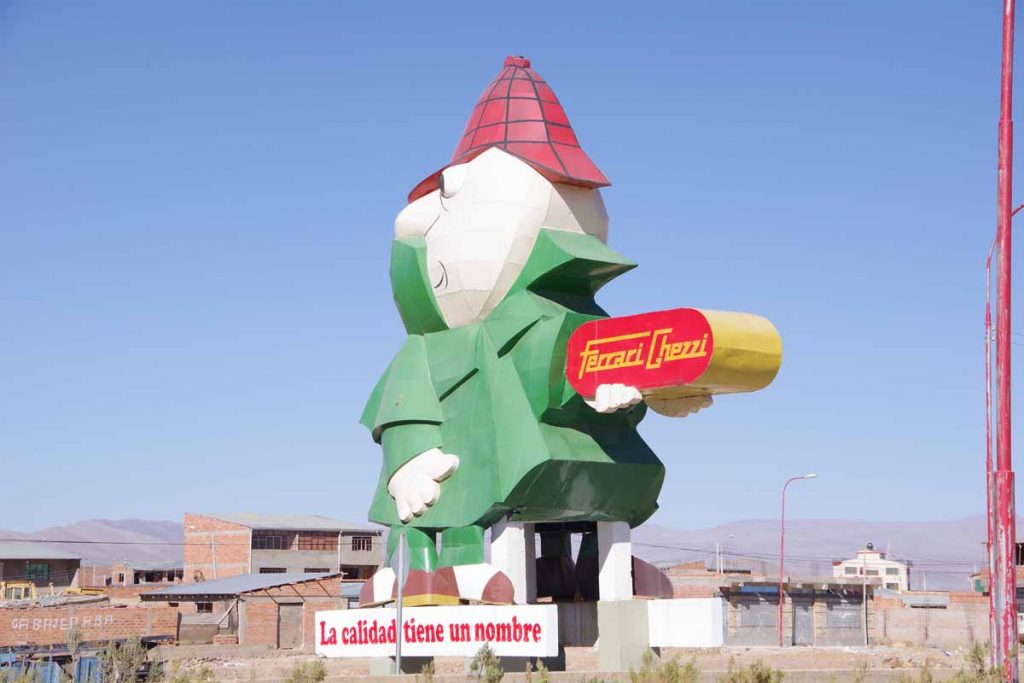 Quality has a name. I haven’t seen any Ferraris in Bolivia so far. 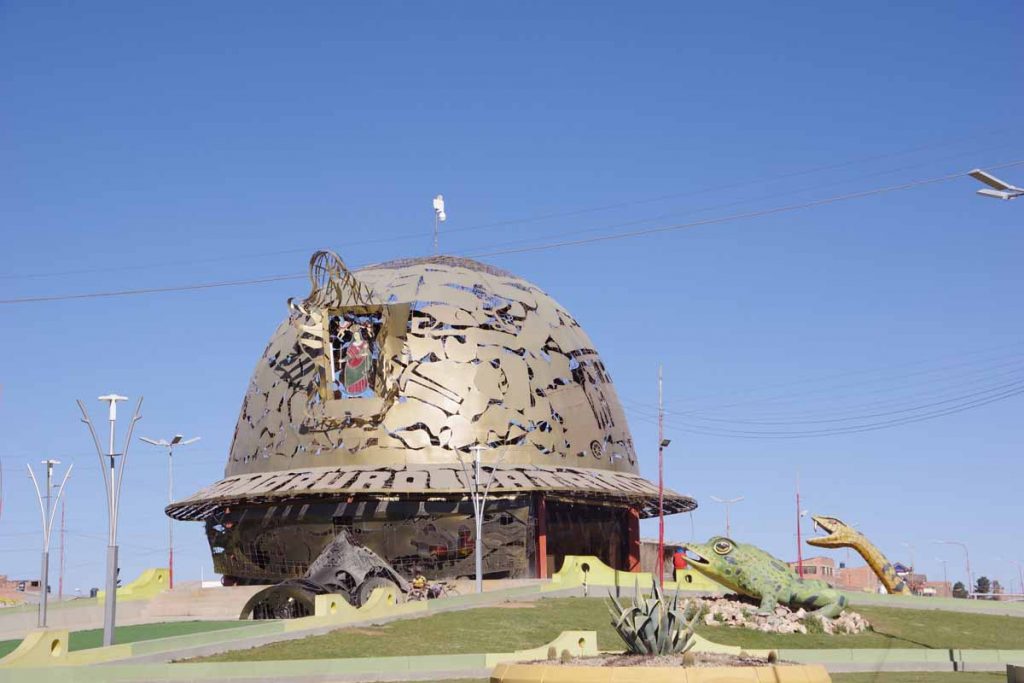 At 120km, I came to the mining helment which marked the start of Oruro. 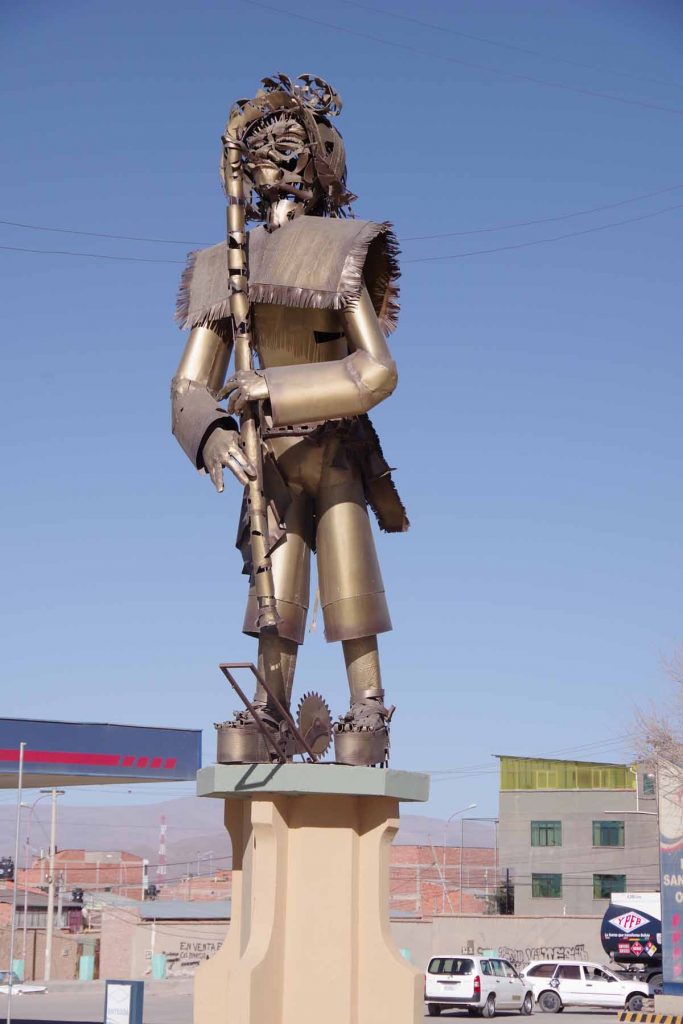 There were also funky looking statues along this road, mostly in this metal style. 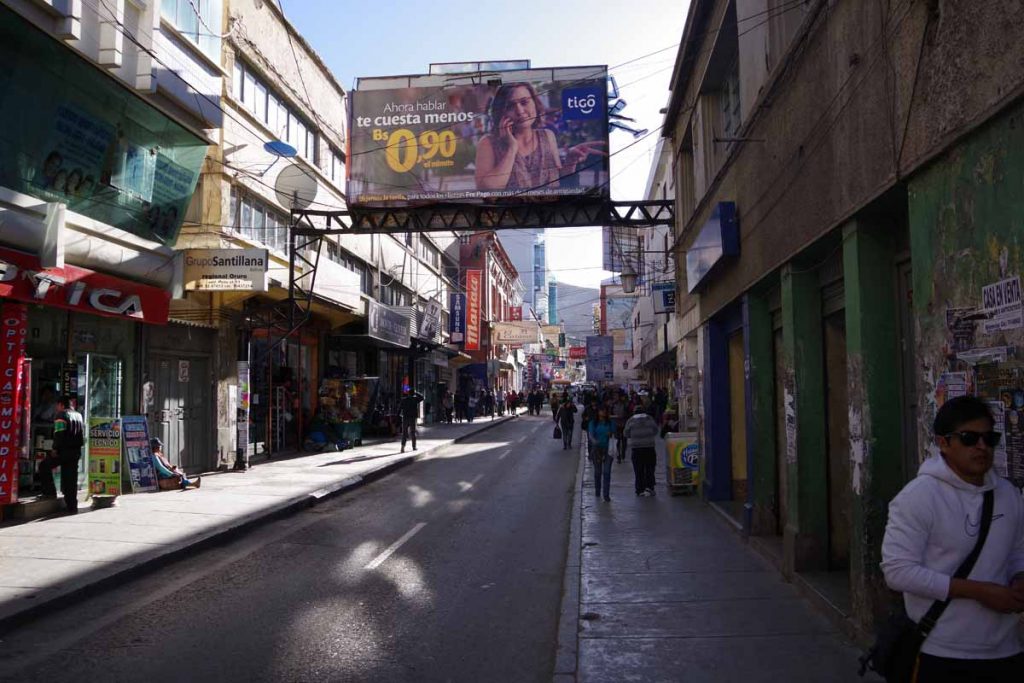 Eventually got to middle of town with many small narrow streets. I had picked out a hotel from other cyclists blog descriptions and was able to find it easily. 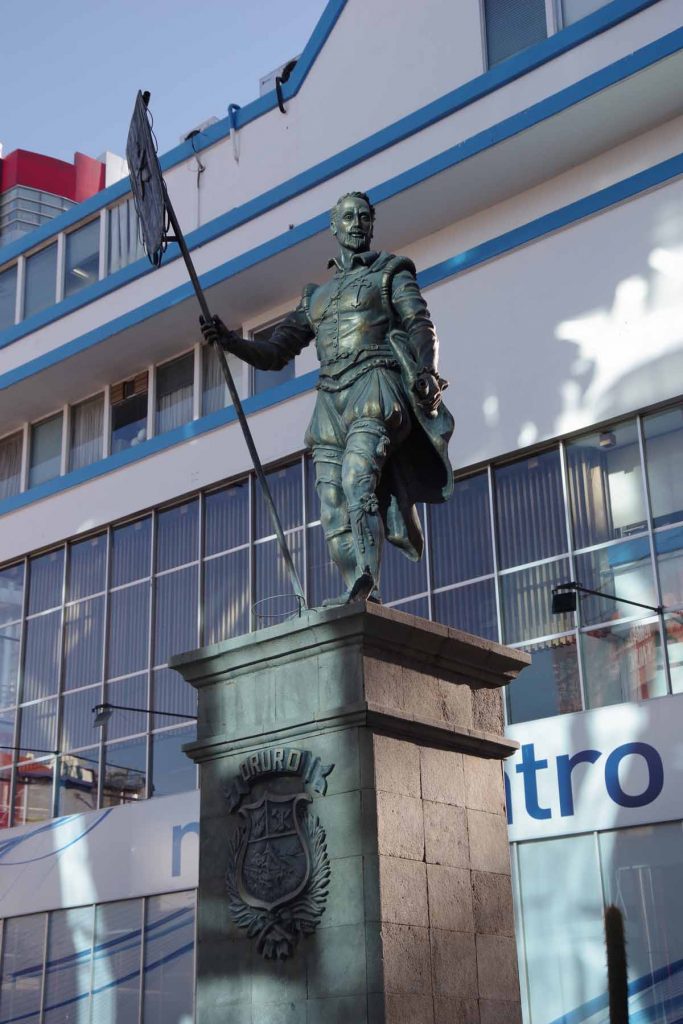 About a block from the plaza. Unlike El Alto, the streets are busy but not completely packed.

I booked a hotel for two nights. Now finalize the next days to the salt flats. 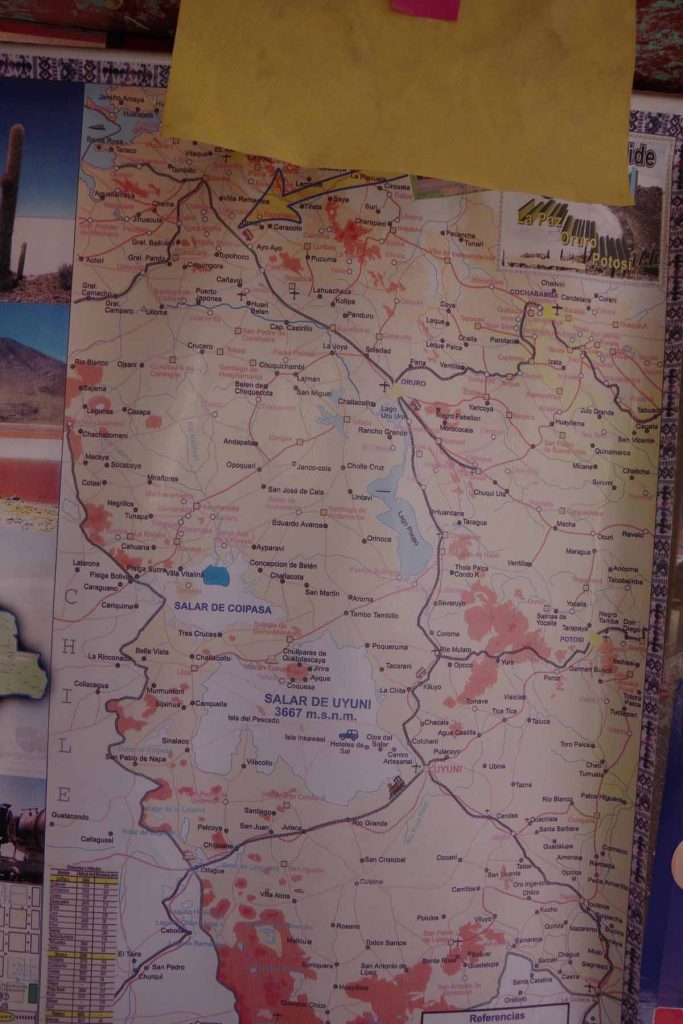 This map was hanging in Tholar on first these two days. Salar de Uyuni is the largest salt flat. In the summer, after it rains parts of it are a salty lake. In the winter, the surface dries up and is possible to ride on top. I will most likely cycle the main roads to the salt flat and then take one night to ride out and camp ways out.