Happy spring or fall for those of you in the northern hemisphere.

While cycling I’ve become more aware of phases of the moon, time of sunset and length of the day. Since Lima, there have been two factors affecting the day length: as I went further south, the days became shorter and as spring approached, the days became longer. Between Arequipa and Mendoza these two factors almost canceled each other out, leading to 11 hours and 15 minutes between sunrise and sunset in both cities. After Mendoza, the days have been getting longer and from here until Ushuaia both factors are now increasing the length of the day – to reach 17 hours and 20 minutes on the solstice in Ushuaia.

Two days brought me 188 kilometers further to the town of Malargue. A small town with wide streets and also where I’ve planned a rest day for tomorrow. 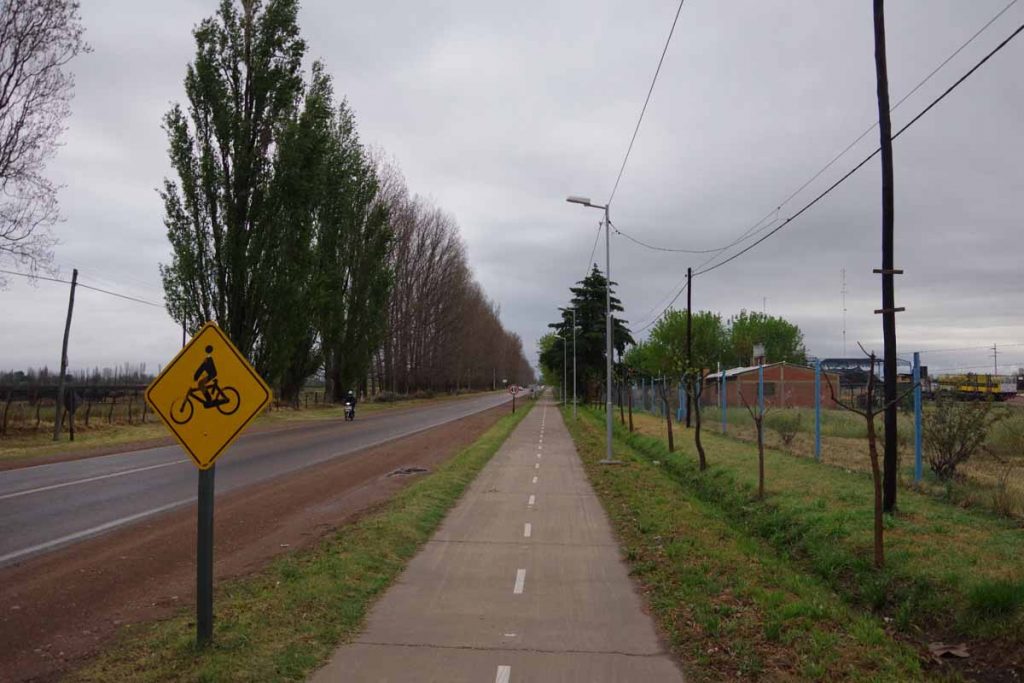 It rained overnight. My bike was parked outside as I’d let the hotel talk me into placing it in the alley behind a locked door. However, didn’t look too wet and rain was pretty much past when I departed. The first fifteen kilometers were still through San Rafael including this bike path shown above. 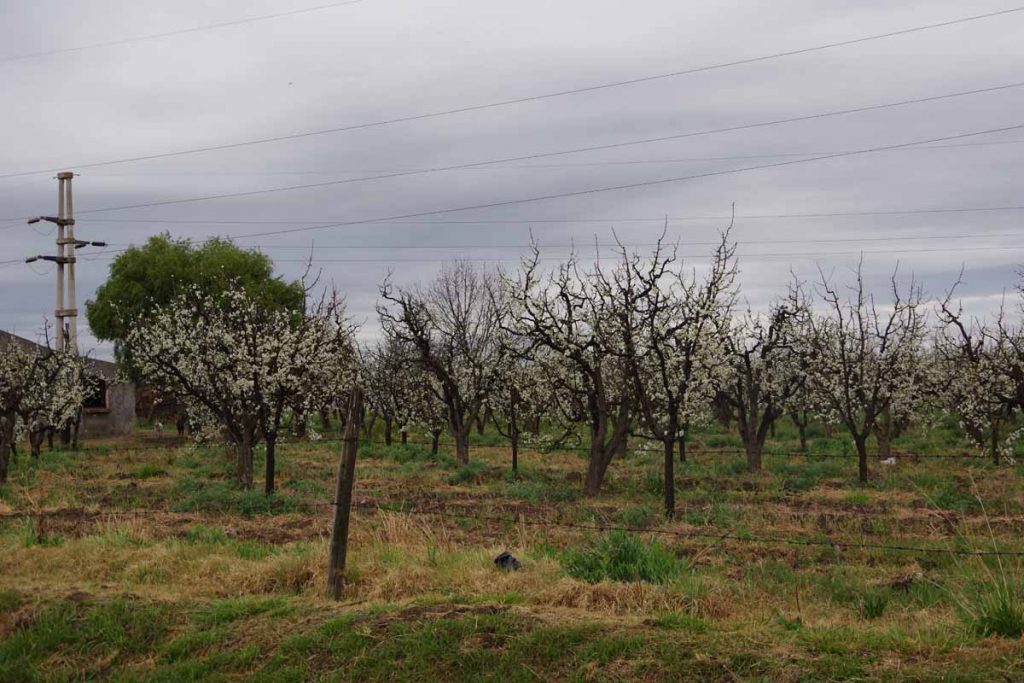 Fruit trees are in bloom. 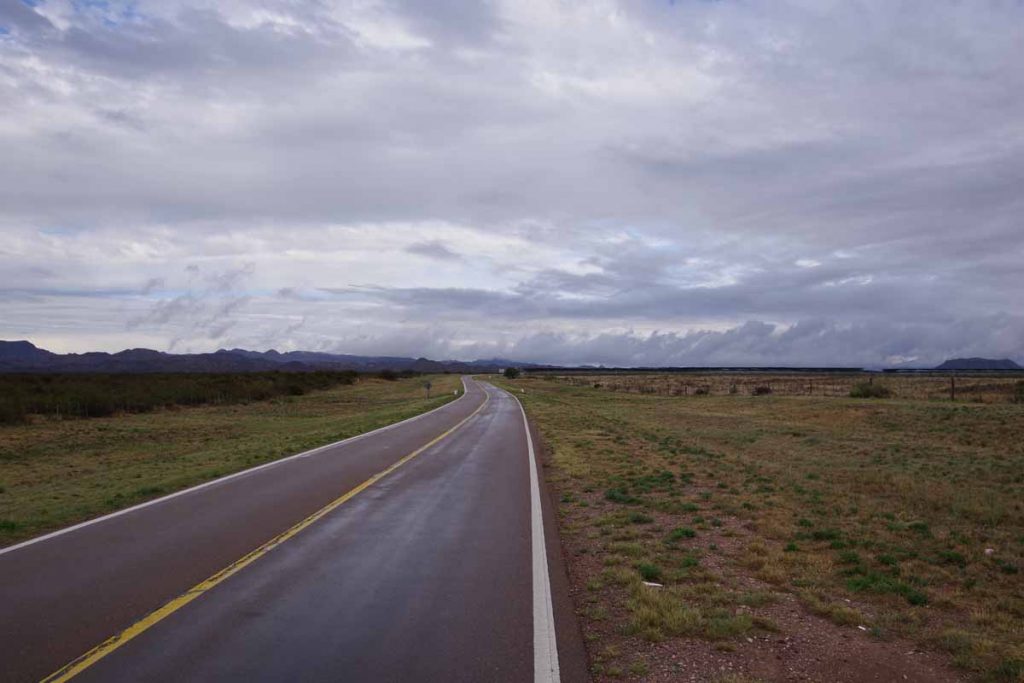 On the edge of town, the road started climbing. There was a brief stretch of 8% grades, but most was a gentle 1% or 2% climb. 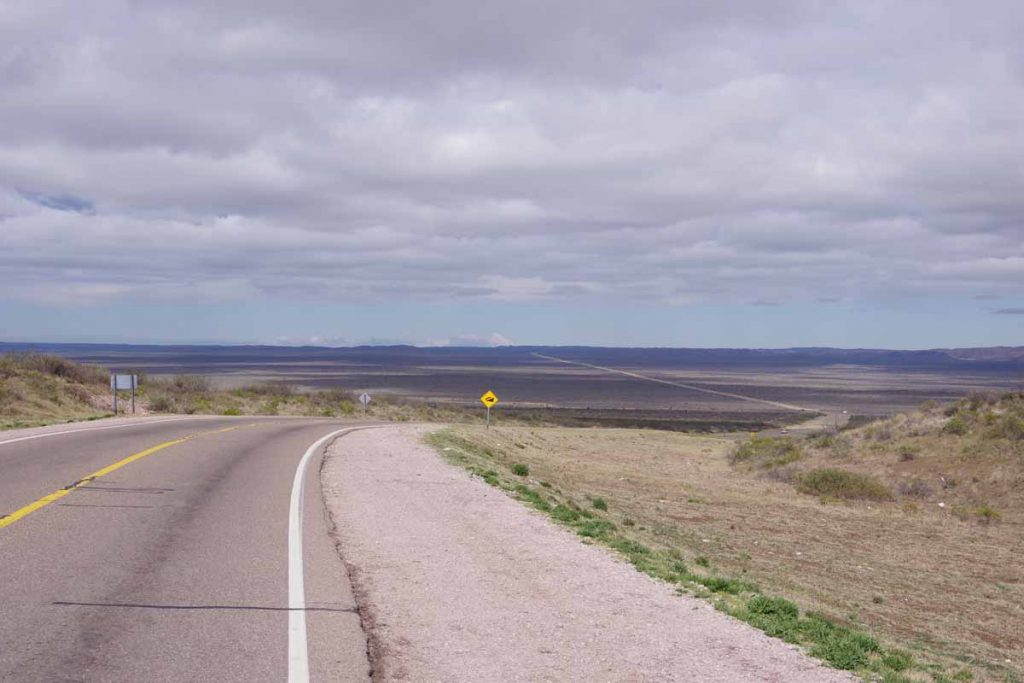 Some wide sweeping views at top of the first climb including snowy peaks again. 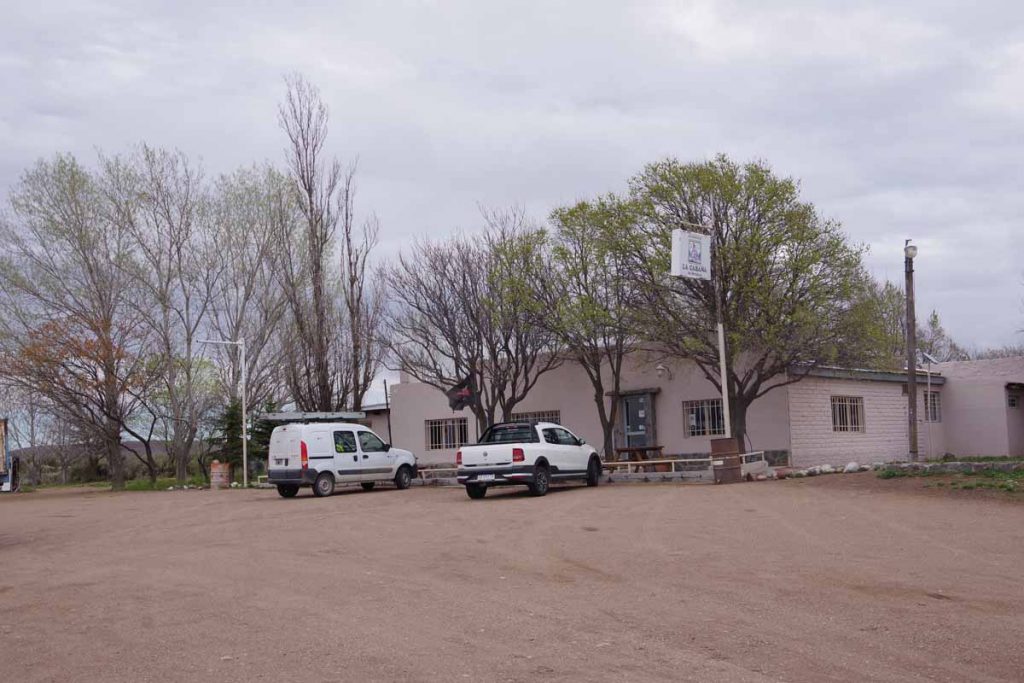 At 52 kilometers was the only real business establishment after San Rafael. This small cafe is where I had lunch. 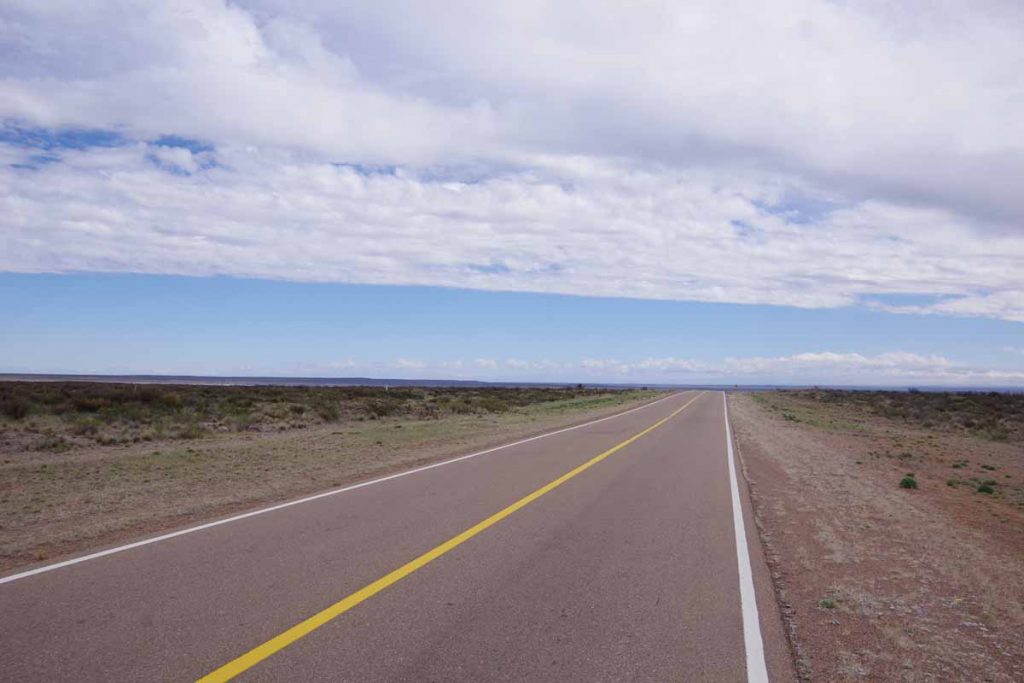 The road was smooth. There were fences on both sides and this didn’t look the most inviting to camp. 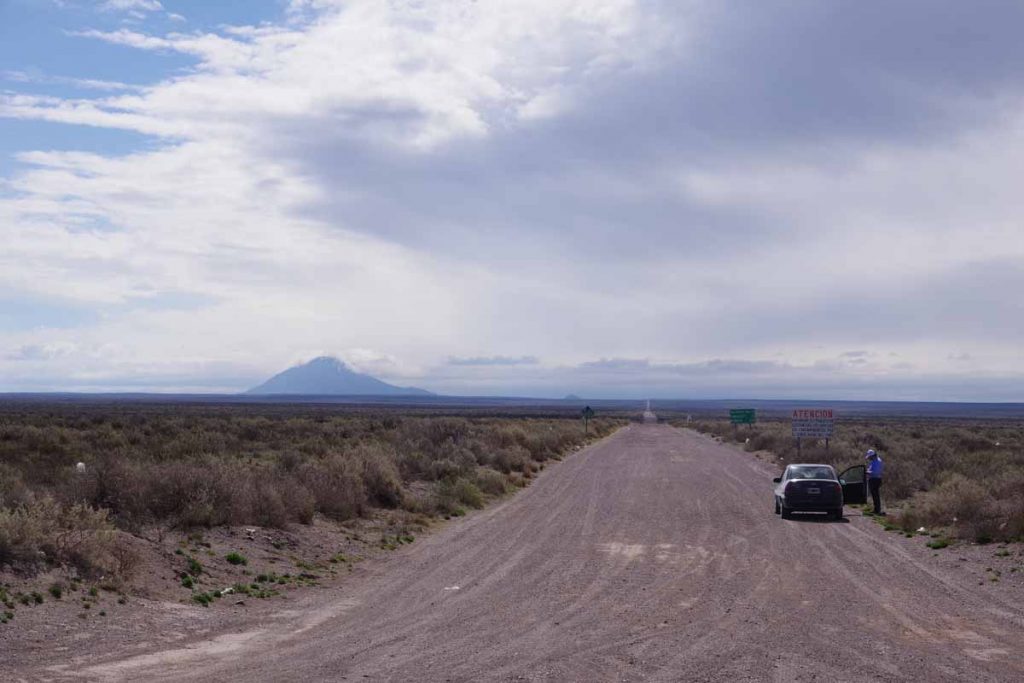 The other end of this road was in Pareditas. It was 113 kilometers of this gravel that I had avoided by going around via San Rafael. 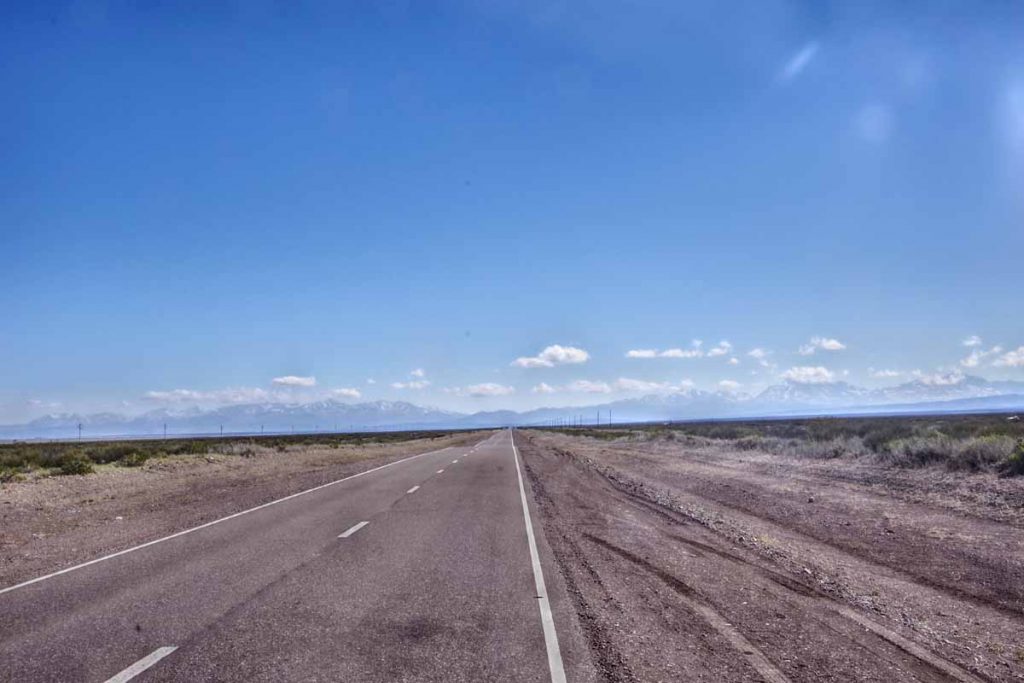 The mountains came into view and started getting closer. 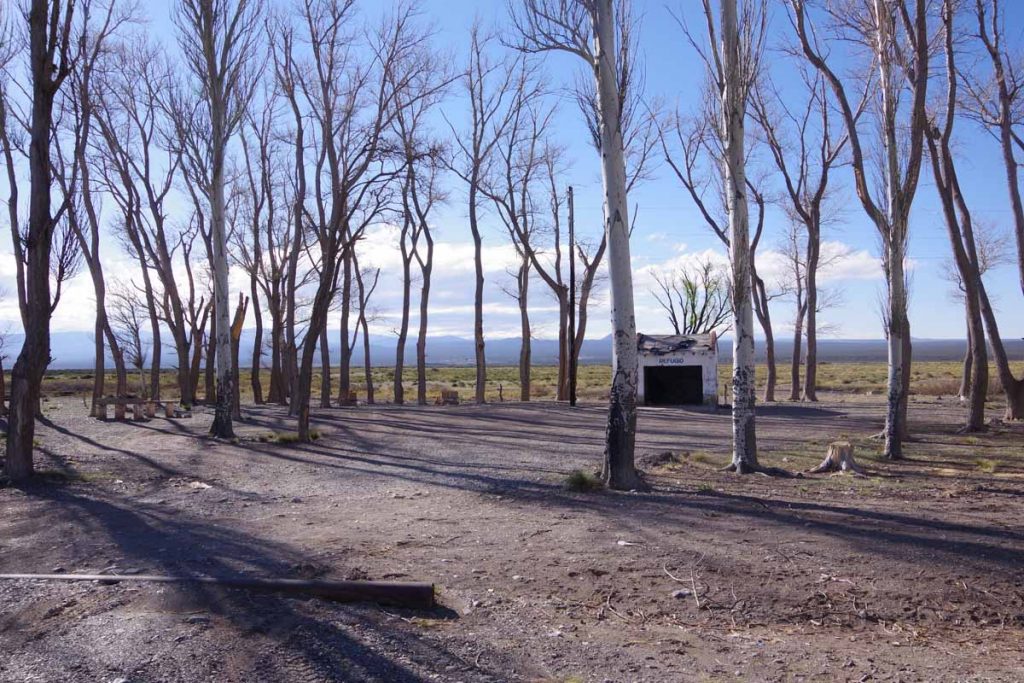 At 120 kilometers was this roadside area. The trees allowed me to get a bit further from the road to camp. While there were no services this was a nice camp site overall. I think one vehicle stayed overnight with a barking dog, but I slept well.

Day Two – Roadside Camp to Malargue
It was just below freezing in the morning but warmed quickly. 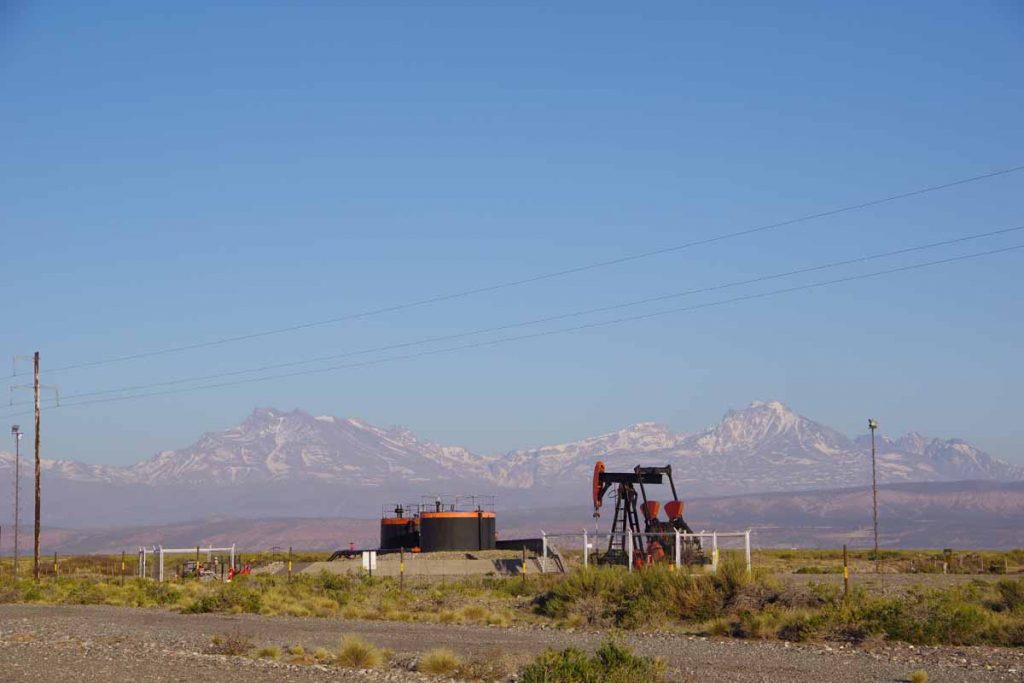 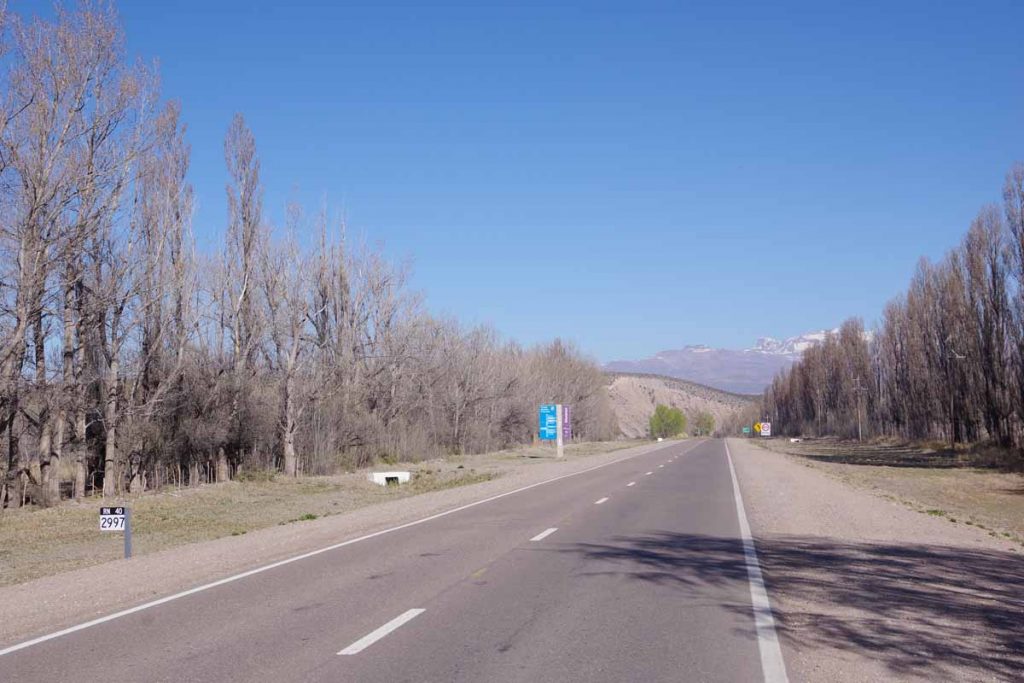 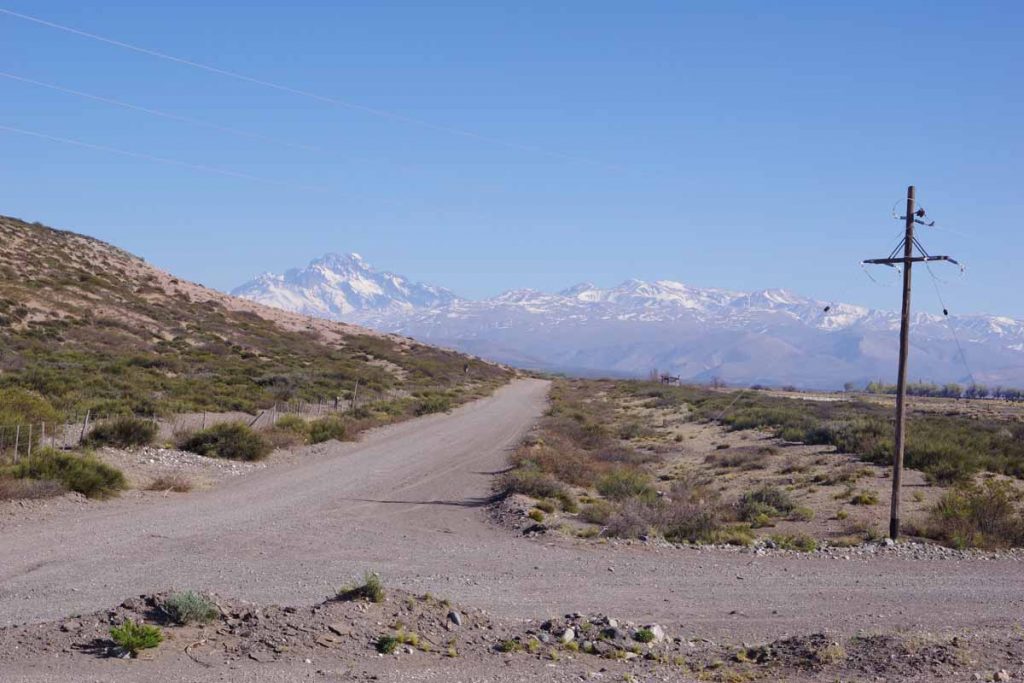 Just past El Sosneado was a river valley with two interesting points of interest. While I didn’t go up the valley (and the road would have been closed due to snow), I had read about them.

67 kilometers up this valley is an abandoned hotel and some thermal pools. It was rumored to be a hideout used by Nazis to evade capture for war crimes. Further description (in Spanish), here.

Somewhat further than the hotel and higher up is the crash site of Uruguayan Air Force Flight 571 in October 1972. I had read a book about the ordeal, “Alive, Story of the Andes Survivors” a number of years ago and just recently read it again in Mendoza. A complete description in the book, but a shortened version is the flight was carrying an Uruguayan Rugby team for competition in Santiago, Chile. Weather across the Andes was too treacherous so the plane stopped in Mendoza. When it tried again the following day, the intended flight path went first south to Malargue, then across the Andes and then north again. There was a strong westerly wind, little visibility and plane was still in the middle of the Andes when the pilot radioed intention to start the descent to Santiago. The wings hit sides of a mountain and the tail fell off, but the main fuselage stayed intact for a sliding crash landing on the snow.

Some of the 45 passengers and crew died in the crash and others in days following of their injuries. Some survived the crash but were killed in an avalanche on day 17. As the survivors realized a rescue wasn’t coming, they prepared the strongest to hike out to safety. The expoditionaries first went downhill, but in a mistaken impression they were in Chile, they turned back since it looked like this led further into the middle of the Andes. If they had continued, then in about two days they would have reached the abandoned hotel and somewhat lower the (closed) road leading down to El Sosneado. Instead, after waiting some weeks, the expeditionaries hiked up another 600 meters (2000ft) to the top of the ridge and then down that valley into Chile. It took three days to climb to the top and another week to reach civilization. Overall, more than ten weeks elapsed since the crash but this then led to the rescue of the 16 survivors. 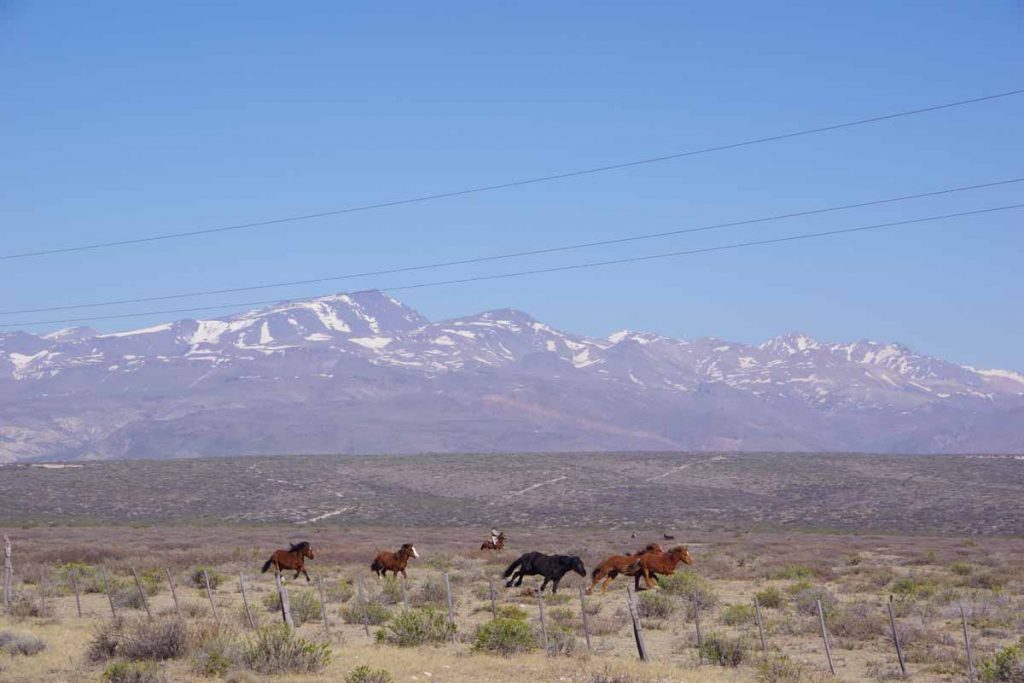 In this next stretch saw this cowboy chasing horses. 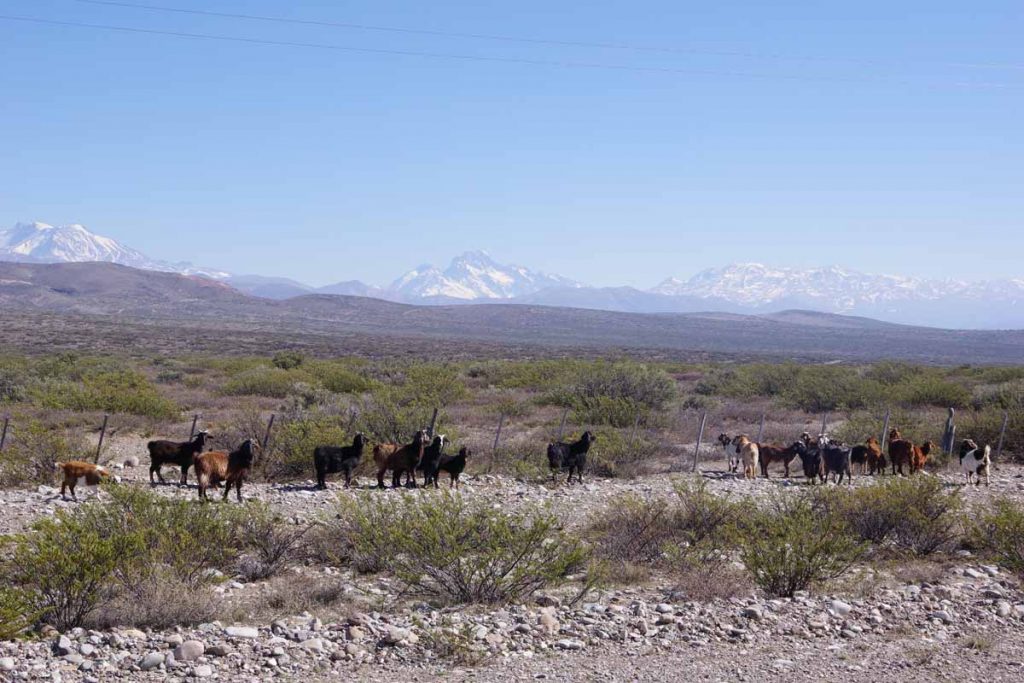 Also some goats along the way.

There was a turnoff to Las Leñas, one of the largest ski areas in Argentina. Ski season ends on October 1st. I saw some ski rental places still open in Malargue, the nearest town with an airport. However, I expect tourist season is winding down and was able to find a hotel without too much difficulty. 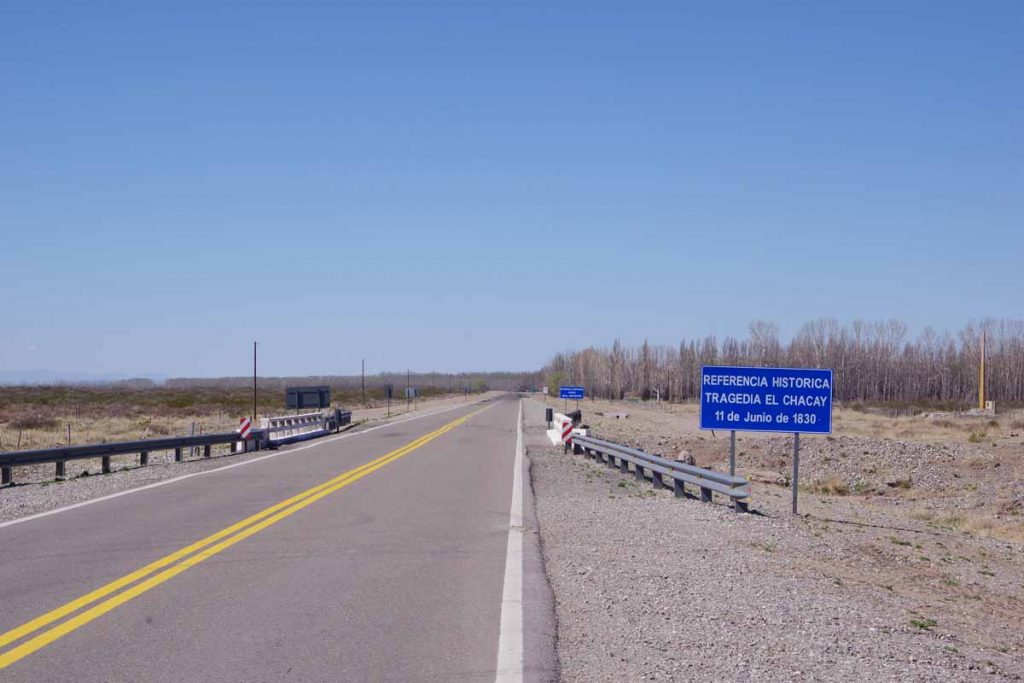 Apparently, the Tragedy of Chacay happened when Governor of Mendoza Province, as well as those in his party, were killed by local native Indians in the early history of Argentina. 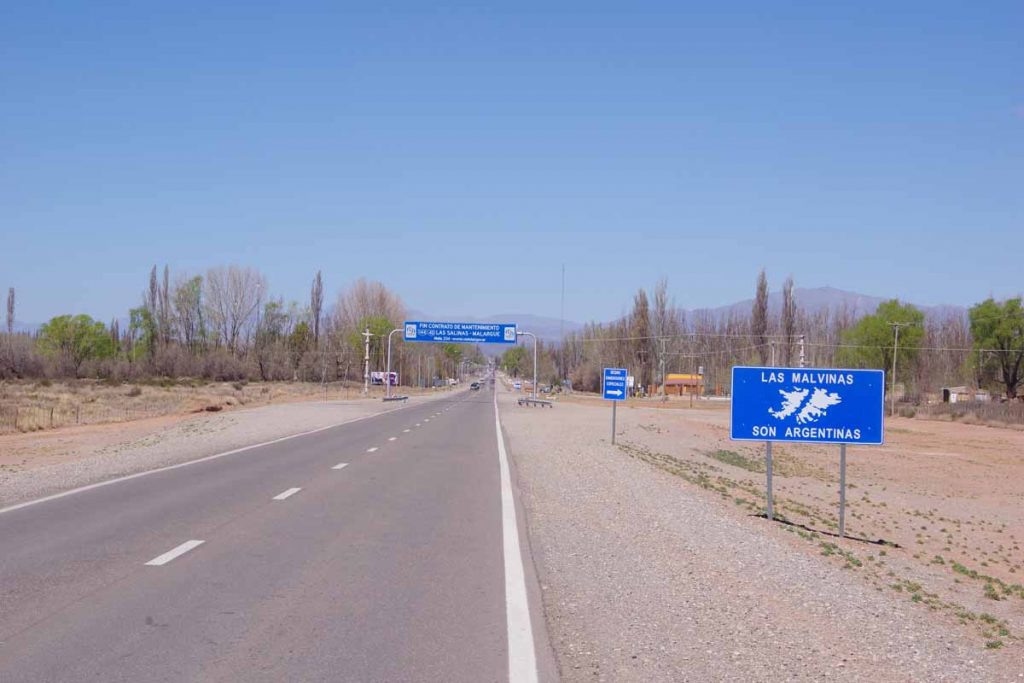 Once I got close, I saw signs for Malargue as well as another “Las Malvinas” sign. 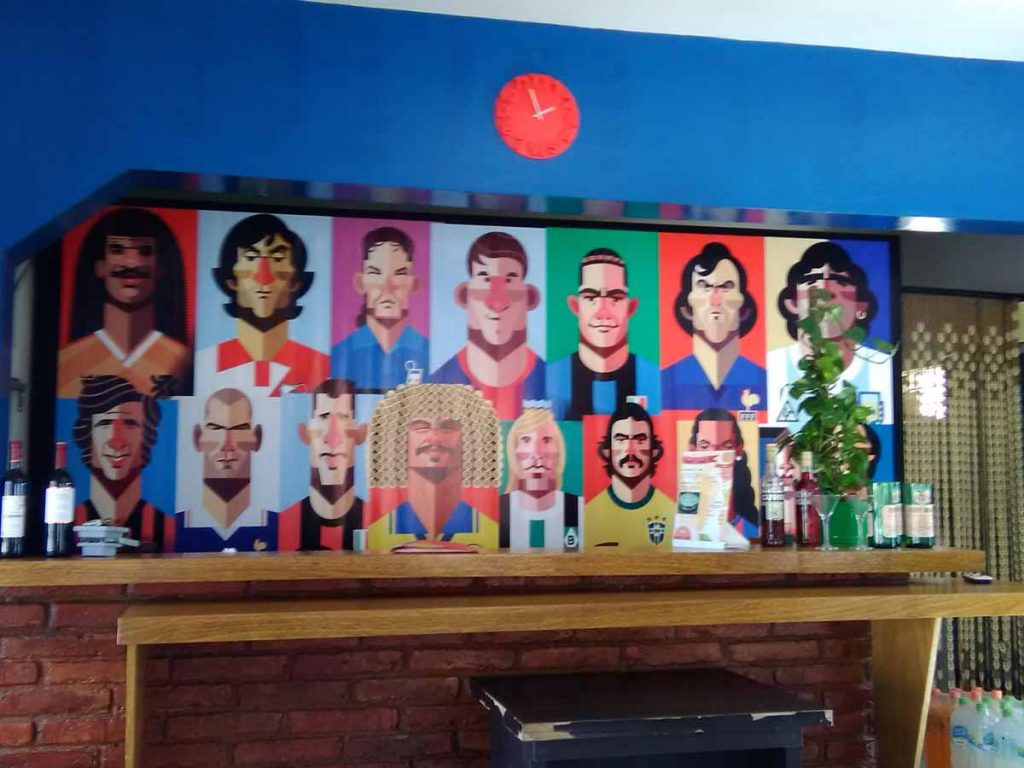 Looks like a football team, though not quite sure which players are painted here.

Overall an easier day today, but still decided to take a rest day here since upcoming road will become more difficult and towns with hotels further apart. Expect a few days of camping and a ~100-kilometer stretch of Ruta 40 with gravel and road construction. 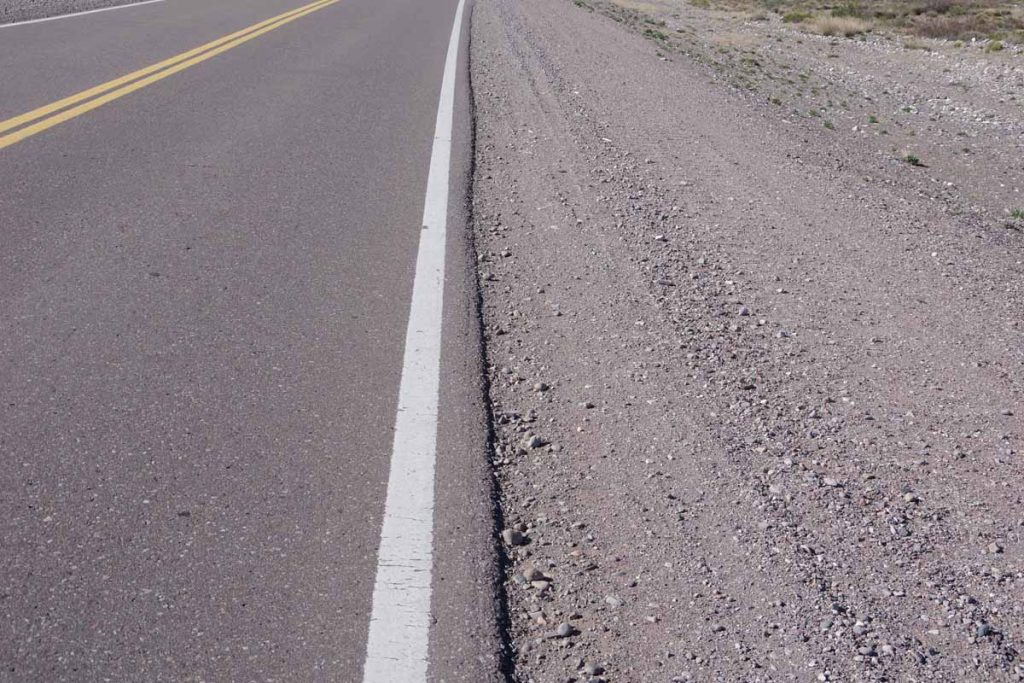 A good example of the difference between pavement and gravel I expect can be seen looking at the gravel shoulders. This will be slower cycling and after the rest day may be a several days before the next update. However, first an easy day in this tourist town near the end of the ski season.