Three days of cycling brought me to small settlement of Dease Lake. Each day had some rain, though fortunately avoided it during most of the the cycling hours. 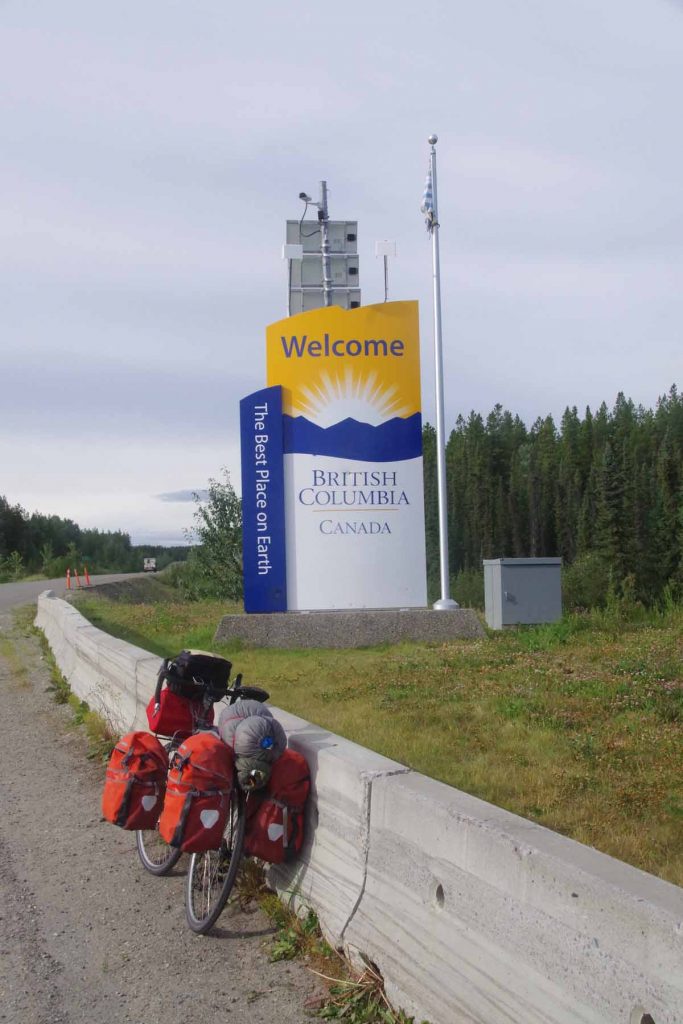 Left Nugget City after a good breakfast, refreshed and ready to see the Cassiar Highway. At 1km, I turned south to the junction and at 5km, I came to the border with British Columbia shown above. First impressions of the road were good, at least as smooth as the chip-seal Alaska Highway. A bit narrower, both in the road and in how much of the side vegetation had been cleared. 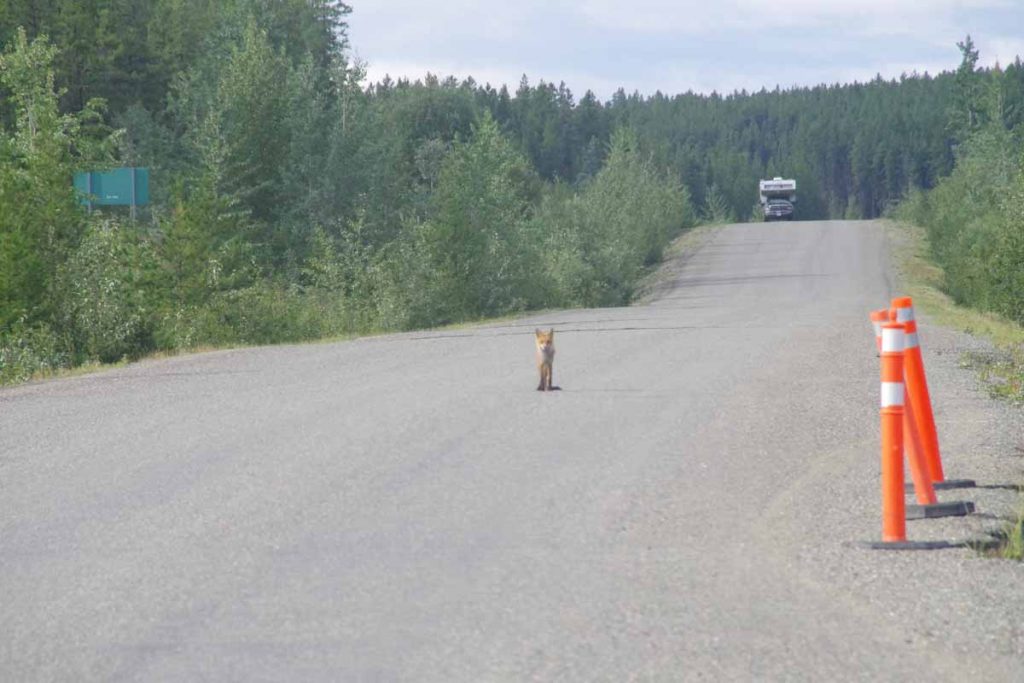 I saw a fox in the distance not long after I entered BC. He watched me briefly and then scurried away. The first 30km along the road had an initial climb and then a lot of quick short hills. In contrast to the Alaska Highway, the Cassiar seems to stay “closer” to the grade and hence had quite a few quick, short and steep grades. That took some getting used to and the first 30km were a bit slower. In return, it felt a bit more “wilderness” than the larger and busier Alaska Highway. There were still a moderate amount of RVs and motorcycles and even some 18-wheeler trucks but perhaps 50% less overall. 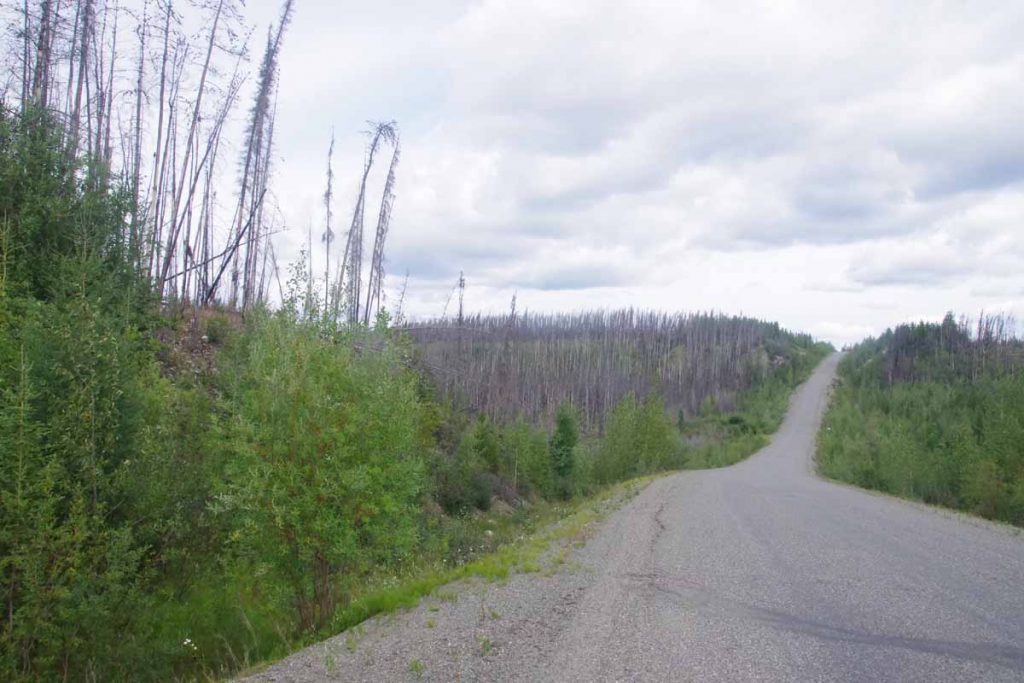 I crossed some older burned out areas. At 44km as I passed Wheeler Lake, the short steep little hills had largely subsided and the chip seal was replaced with perfectly smooth asphalt. Wow! 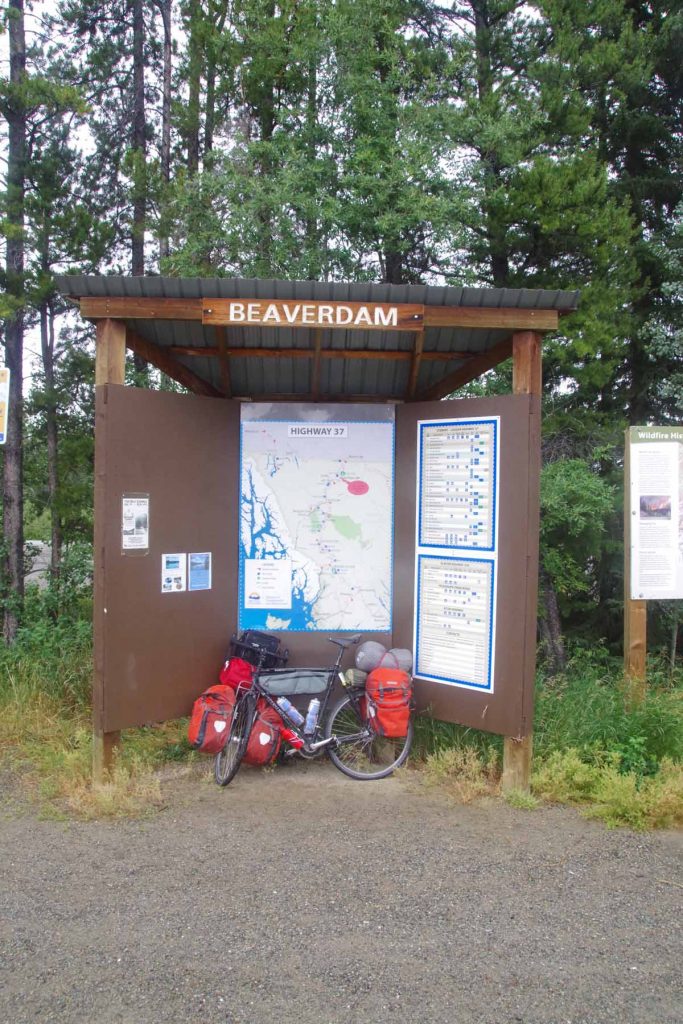 At 60km, stopped briefly at Beaverdam rest area and talked with a truck driver with car carrier bringing seven vehicles up to Eagle River. He warned me of some construction ahead closer to Dease Lake. It also started to rain lightly. However, without too much trouble I was able to find my way to Boya Provincial Campground. 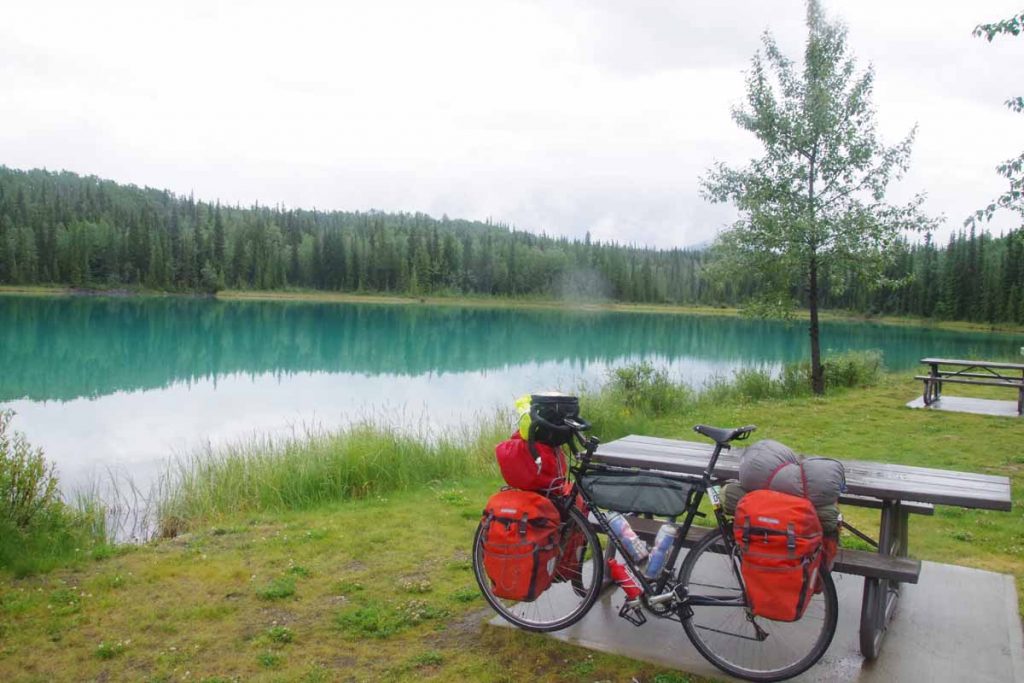 The campground was a beautiful site with two campsites for bicycles with picnic table and right by the lake. It was a great place to camp. Some rain in the evening and also overnight. 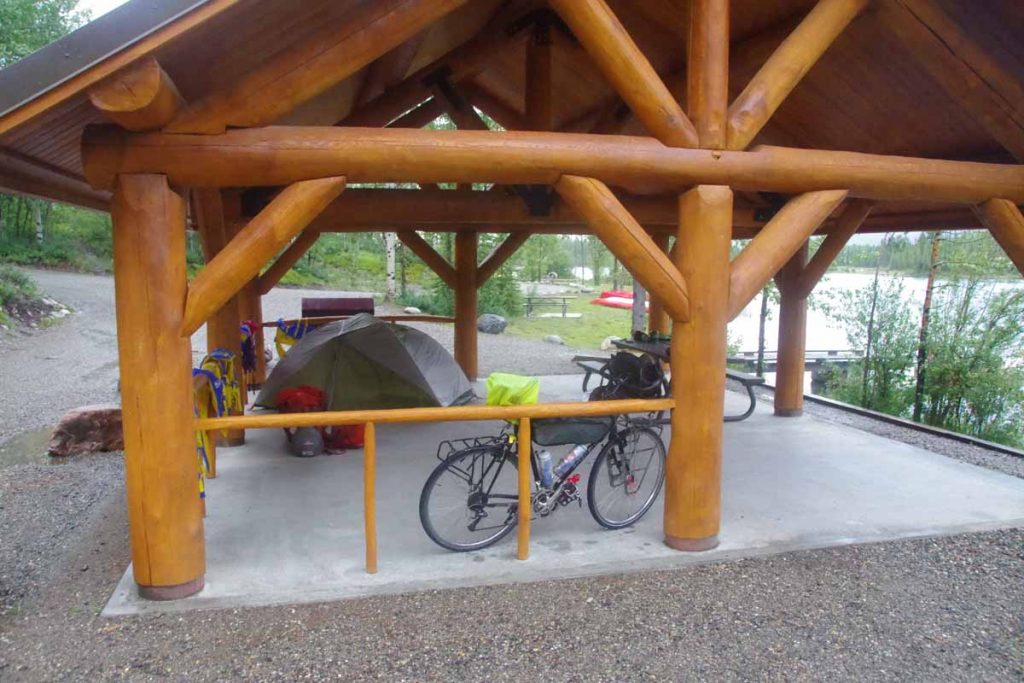 Woke up on second day at 4am to rain on the roof. I let it rain for a while, but not much past 5am, I was ready to get up. Not too far from my campsite was a covered space for the canoe/boat landing. I moved my tent, bike and gear under the shelter and made breakfast. This let me get ready out of the rain and by time I was ready to go, the rain had mostly stopped. 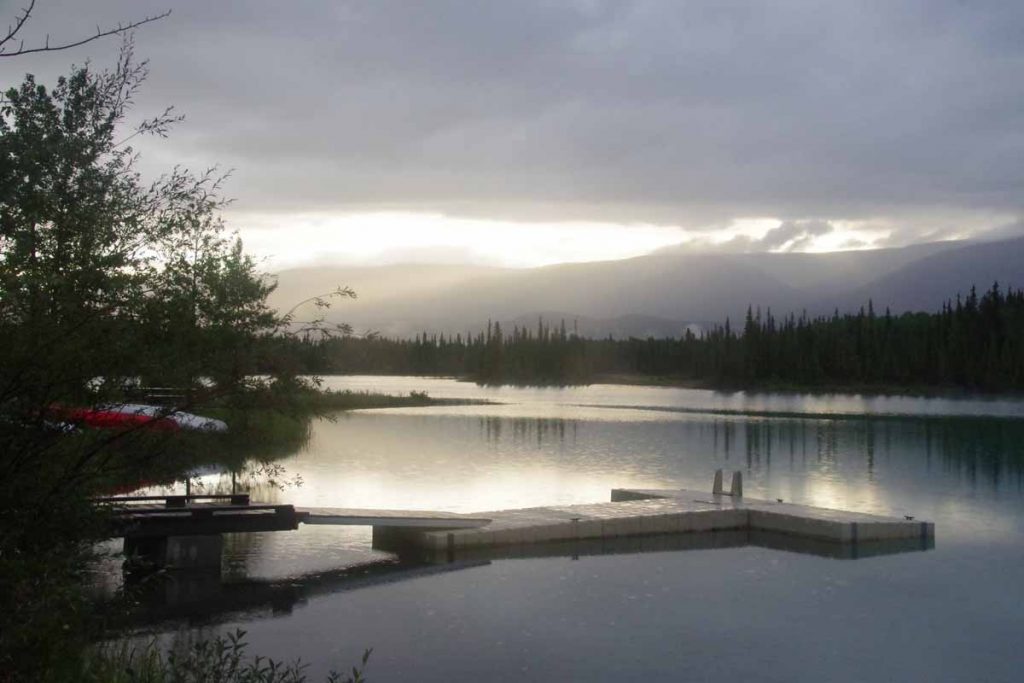 In distance to the north (unfortunately I was headed south), I could see the sun under edge of the clouds. However, it did stay dry on second day until I reached my next camp. First 2km to go back to the main road and then follow the road over some small hills. Theme for day two was “Cassiar Mountains” as I spent the entire day slowly weaving my way between the mountains. 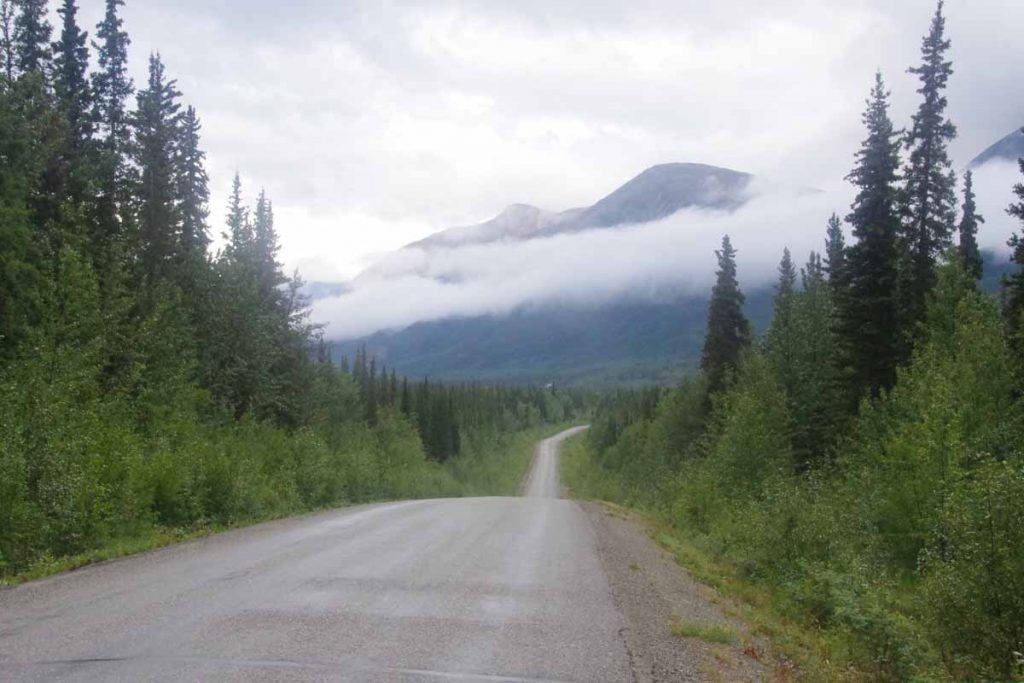 Another image from second day where you can see the Cassiar Highway. 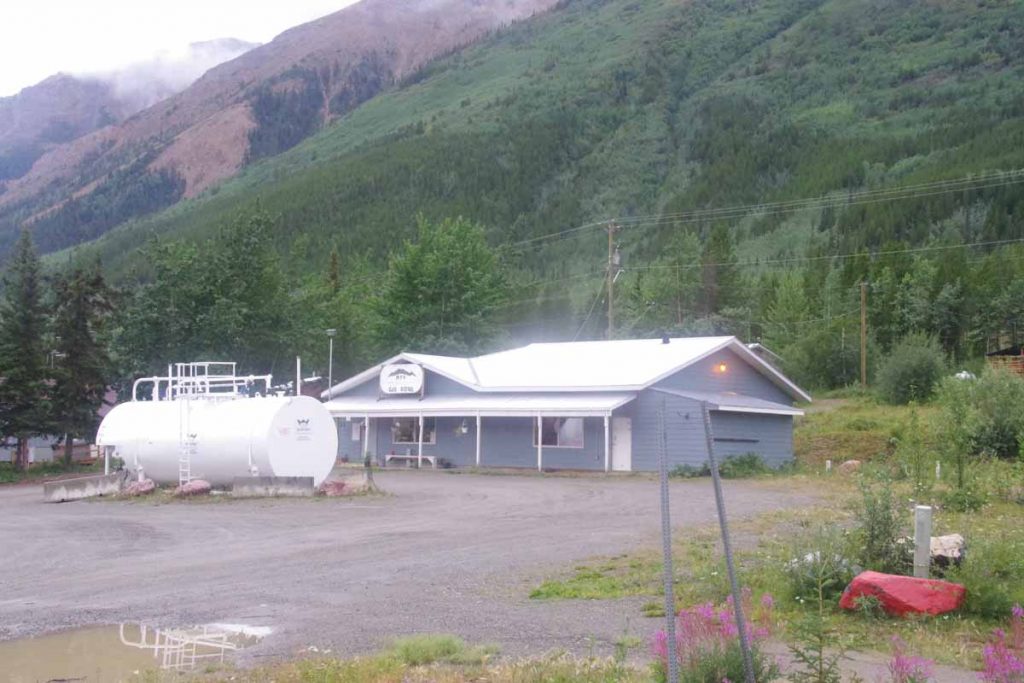 At 15km, I came to “Good Hope Lake” and just in time for the gas station to open. This was also listed as a store, though I would have been disappointed if I had relied on this for provisions. Good thing I got them in Watson Lake. 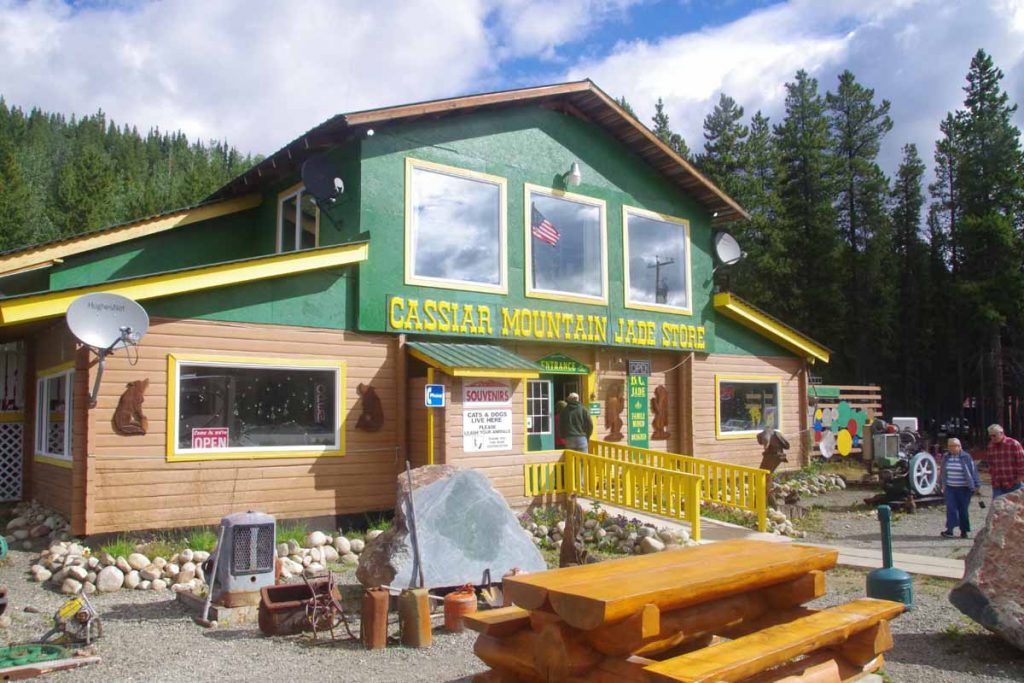 At 40km, I came to Jade City. While it is listed on the map as “city” what you see above is most of it. Apparently, a large percentage of the world’s Jade is mined near here and the store above has lots of different sizes and types for sale. I got a coke and candy bar and instead refueled here. Also interesting to meet a guy who had raced Tour Divide last year with an impressive 27 day finish (100 miles/day). He also told me to avoid carrying too much extra on the Great Divide route. 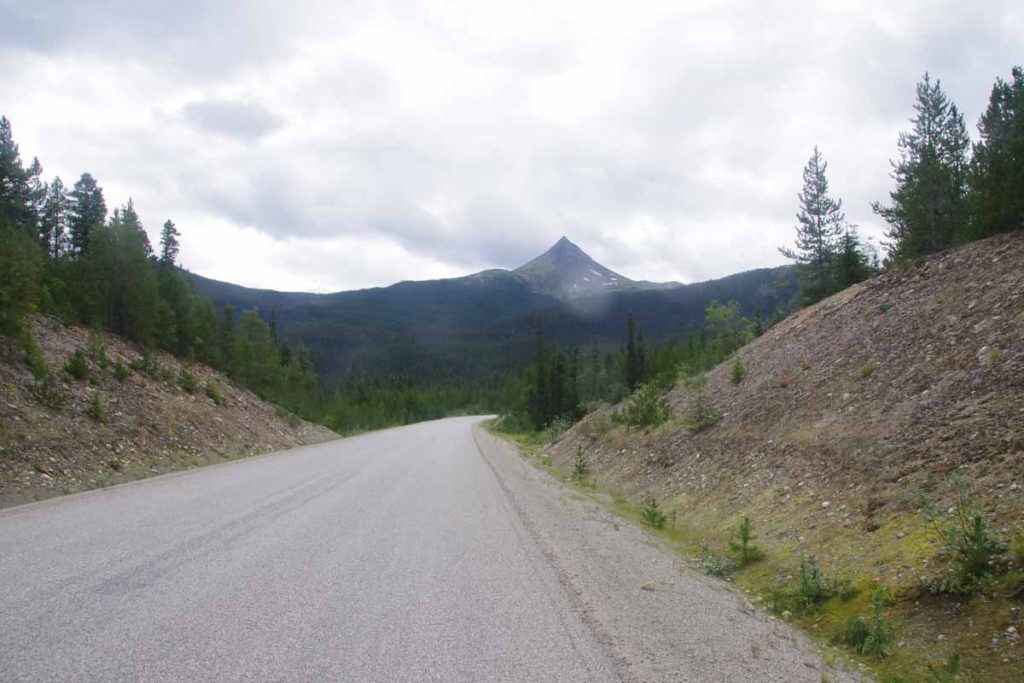 Above is Needle Nose mountain. The route kept threading its way past these mountains and first along a sequence of lakes. I crossed over top of current drainage near 60km and then a good descent for several kilometers to the Cottonwood River. From here mostly flat before the road started following the Dease River uphill. 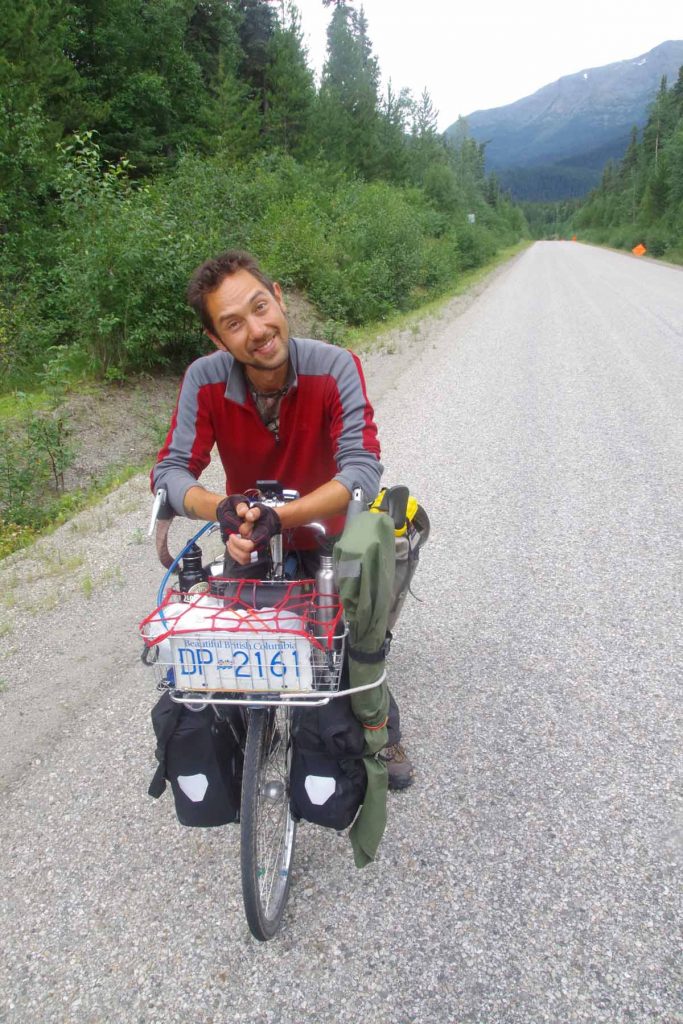 Met a cyclist who started in Ohio on May 17th and was headed to Alaska. We traded information about the road ahead. Not much further, I found a good spot to camp near Pyramid Creek. 86km for the day, but a pretty ride. As far as timing goes, not long after I set up camp it started to rain. Was nice to be snug in the tent with the rain heading down, though did go out later to make dinner. 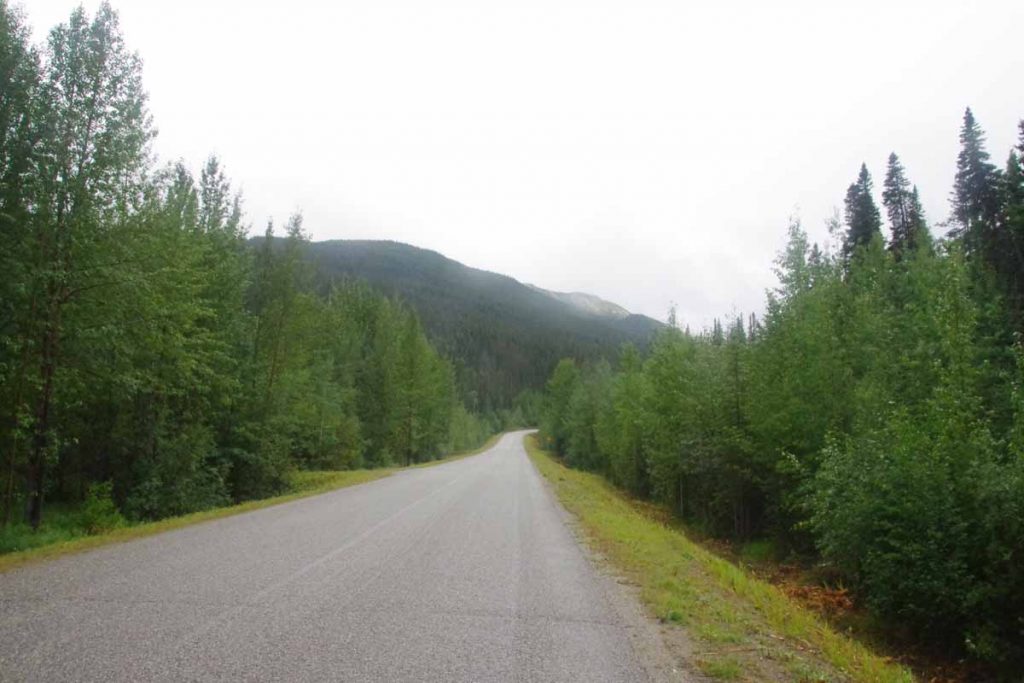 Third day started a bit cold and ugly. It rained a fair amount overnight and in morning when I woke up as well. I procrastinated getting up for a while and as my luck had it, it did mostly stop raining in time for me to make breakfast and pack camp. However, it was cool (8C) and never really warmed up this day. Also later in the day, I got a bit of a headwind. I put my rain jacket on and also sweated some into it. 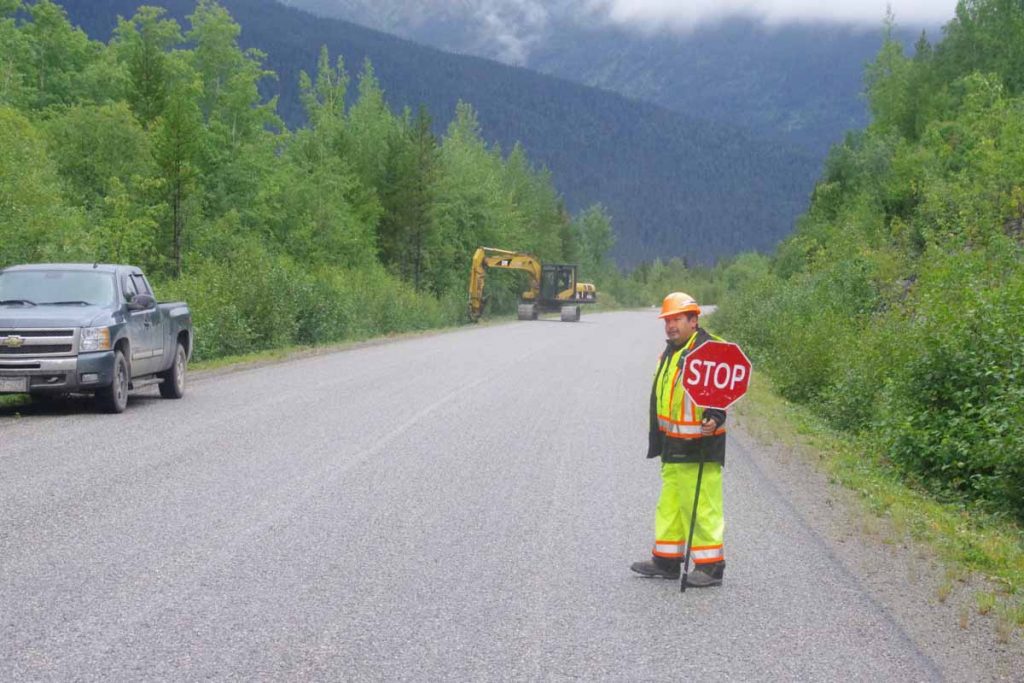 Some minor road construction to start. These guys were using a machine to trim some of the foliage closest to the road. 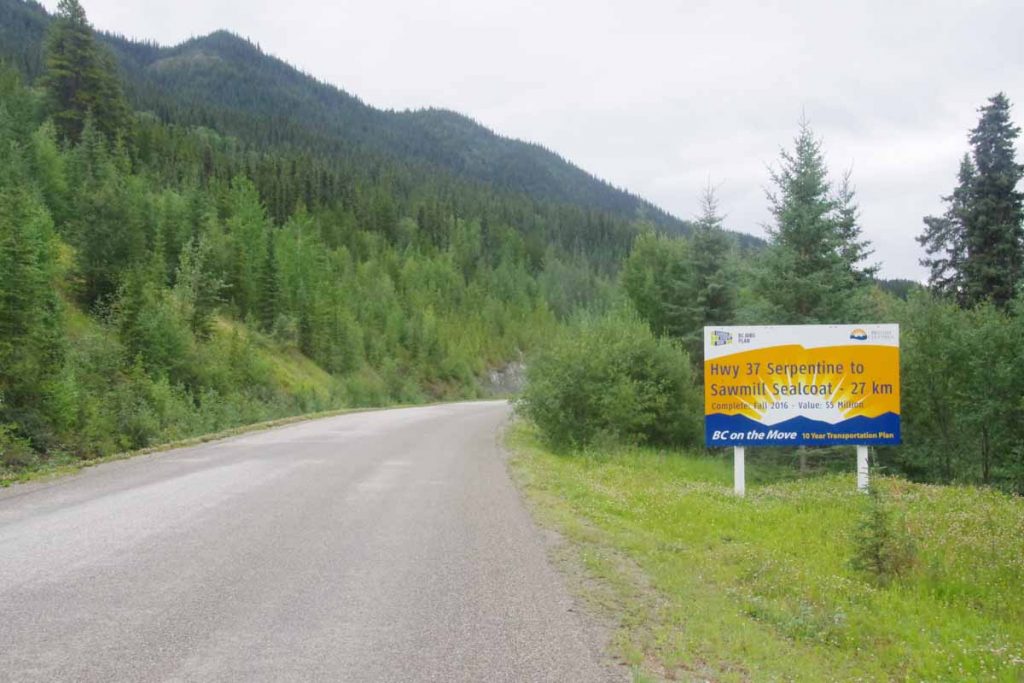 The larger construction was the “Sawmill to Serpentine” project for 27km. In addition to a number of kilometers of gravel, this happened to correspond to spot where the road climbed a fair amount away from the lake and then descended up and down over some steep little hills. The hills, gravel and reappearance of wet spotty rain meant for some slow cycling. Fortunately not that long of a day and I found myself into Dease Lake a little before 1pm. 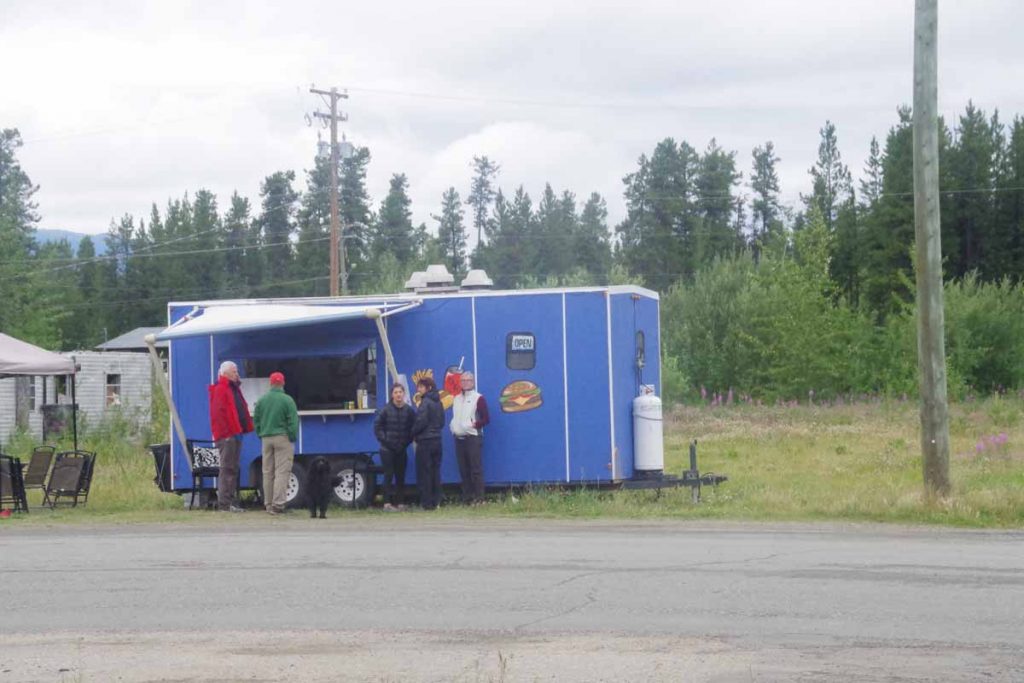 Coming into Dease Lake, I was amused to find some other businesses giving their directions as “turn left at the restaurant”, implying there was only one restaurant. However then found that even that restaurant was closed. However, a reasonable grocery here along with a deli grill. Got a motel room with kitchenette to dry my gear and also can make some things from the grocery. Looking to regroup here and looks like might be slightly damp next few days as well.