Weather today was not pleasant. 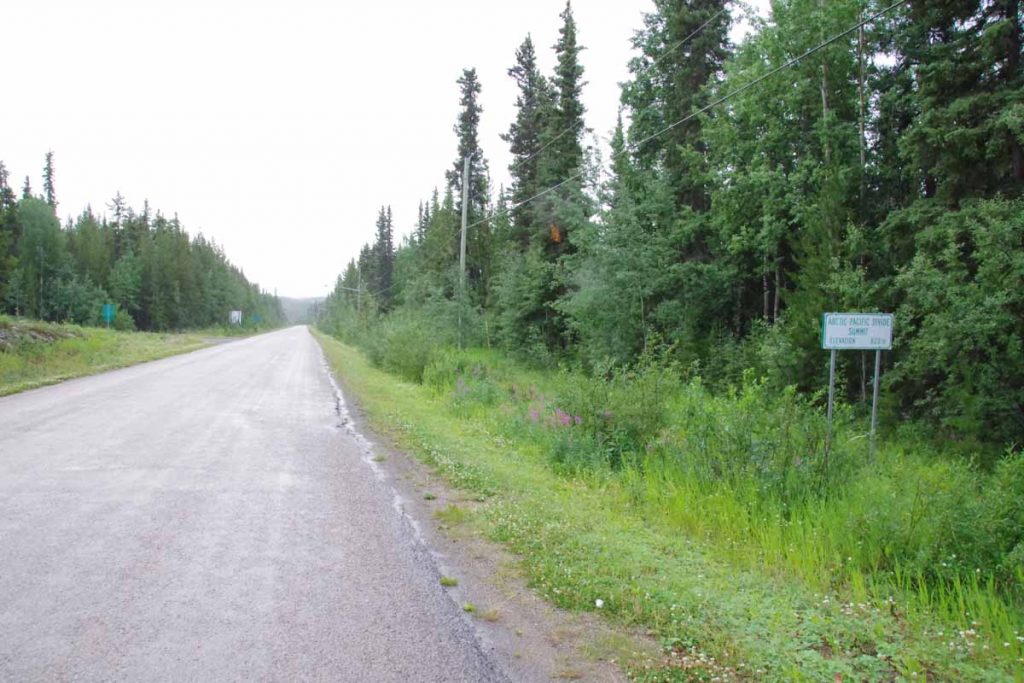 Started out today at 7C (45F) and light rain. Motorcyclists looked at me as if I was a bit crazy, though we also agreed that I’d better generate heat than they sitting with cold wind chill. Fortunately, there was also some climbing on the agenda to generate the heat.

One kilometer in, I came across the sign above about an Arctic/Pacific watershed divide. Apparently, Dease Lake drains north to Dease River and eventually into the MacKenzie River in the Arctic Ocean. Barely up a few feet, areas south of the lake drain to the Tanzilla River to Stikine River and then to the Pacific. Only 822m according to the sign.

The first 9km had some gradual climbs until I reached the Tanzilla River itself. From here it would be 6km of steeper climbs and another 5km to reach the summit of Gnat Pass. 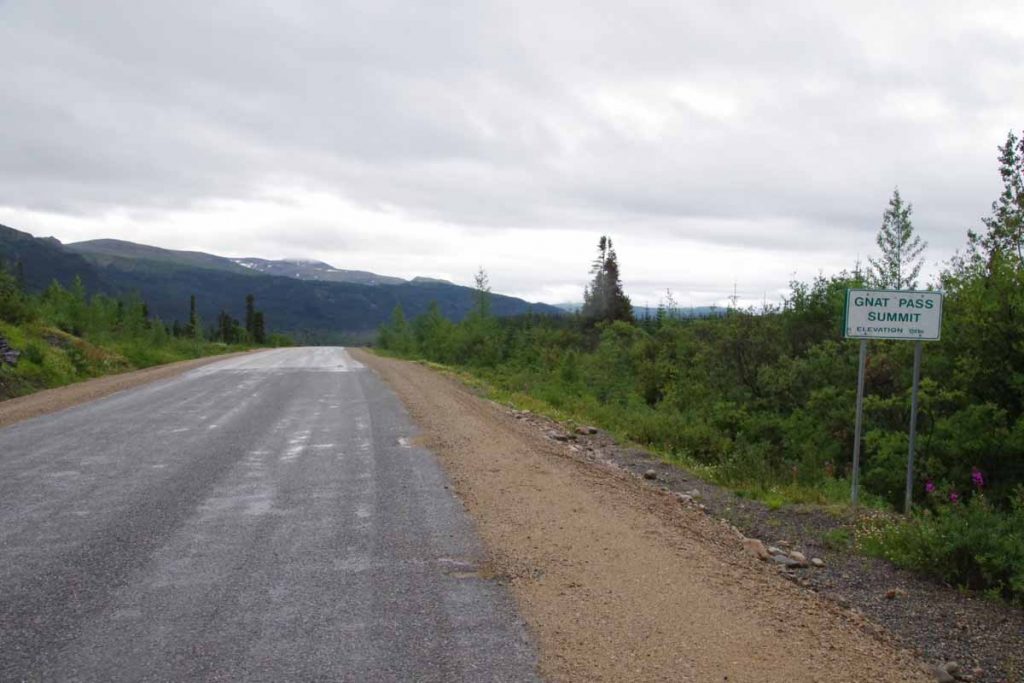 The rain had paused and I was still fresh, so put it into low gear and slowly made my way up the pass. As I climbed it rained a bit more and the temperature dropped. By time I was at the top (1241m), it was 4.3C (39F) and there was also a bit of a headwind. Fortunately, it didn’t get colder after that. 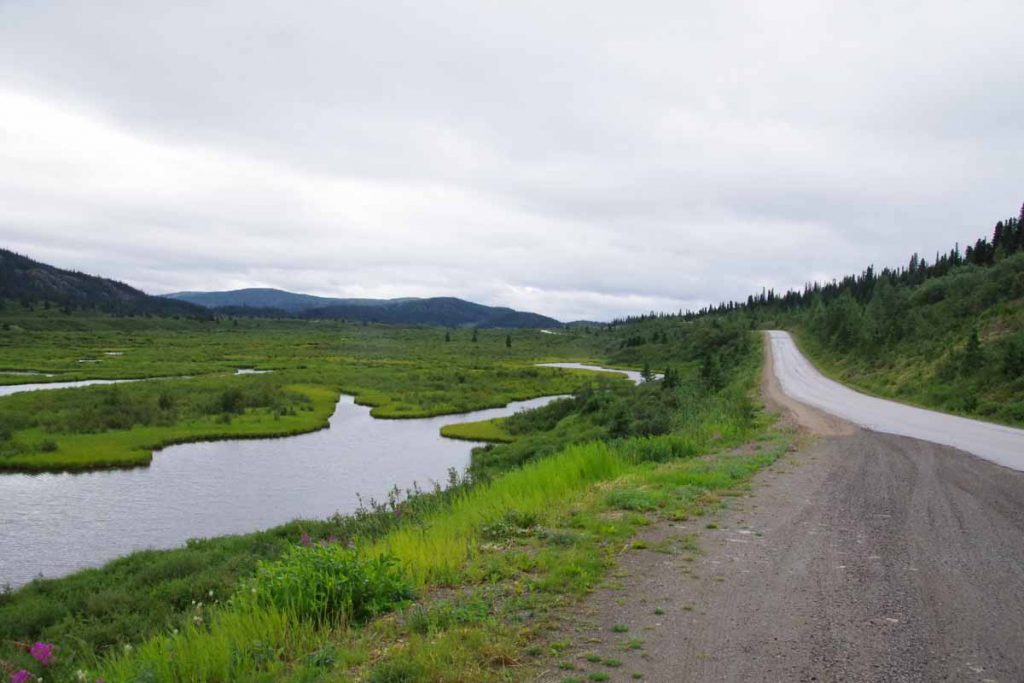 There were some nice lakes and the road generally trended downwards. It did warm a degree or two, but had to be careful to keep moving enough to keep warm. Close to 40km, the road descended a good bit to cross the Stikine River. 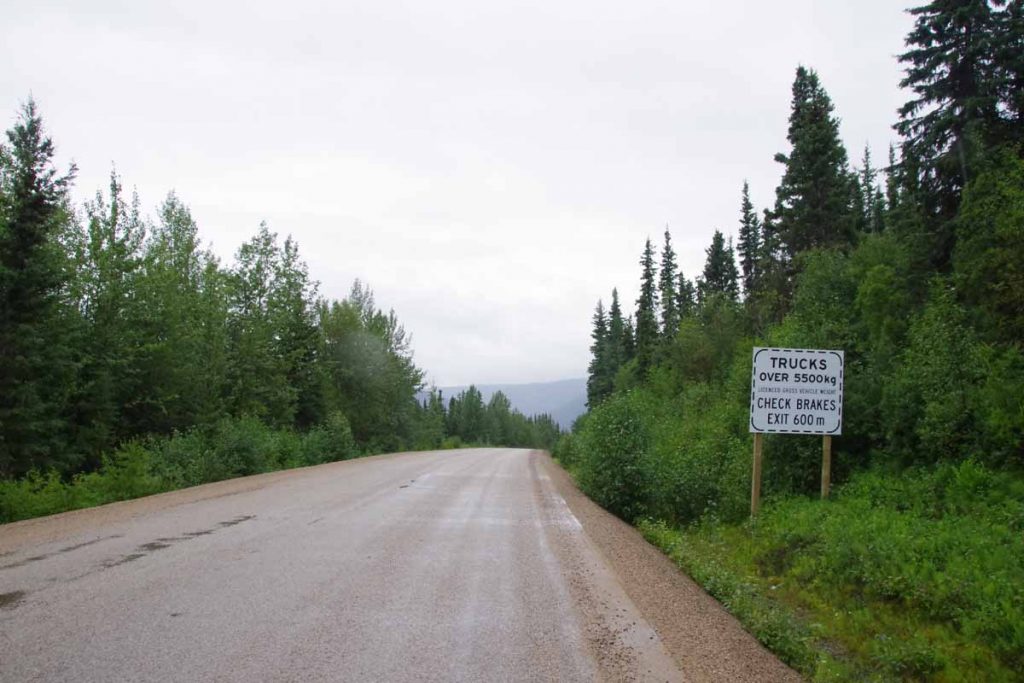 There was an area for truck drivers to check their brakes. Overall, the signs said “6%” but that was only one or two spots and overall I think the grade was less. The bottom was at 51km and 692m elevation, so I lost all the gains I had made for the day. 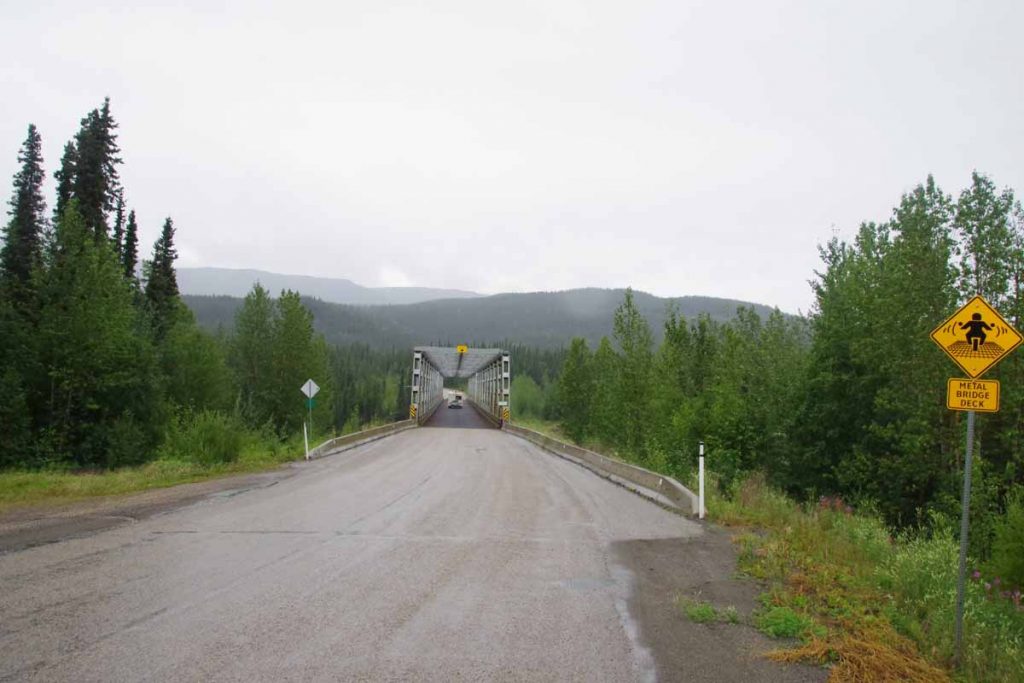 The bridge had a metal deck and I walked across rather than slipping in the wet. The river was surprisingly large. This overall river area is part of a provincial park. On the other side, the climb began again. Next 7km had some solid climbs including a section with steep curves where they had let the road go back to gravel. However, with almost as much energy as the first climb, I was soon back to the plateau. Along the way, the worst of the cold rain seemed to finish as well, though still had occasional drops. 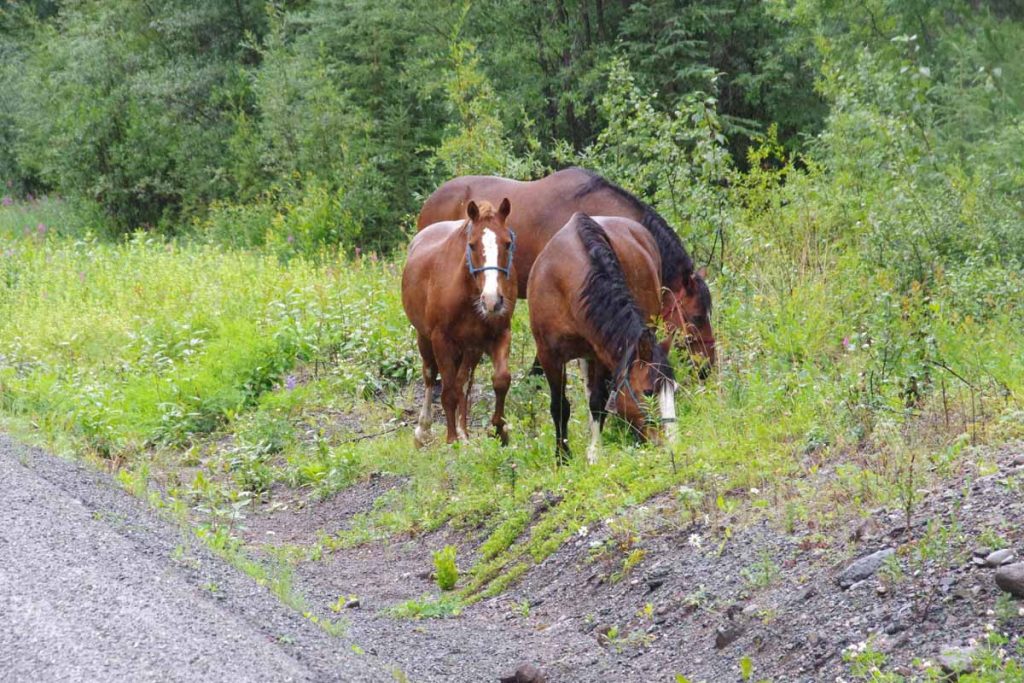 Up ahead I saw something cross the road. Didn’t quite seem like either bear or moose. Once I got closer, I found these three horses. They all had bells on them so made noise as they moved around. I stopped at a rest area and had a bit of of lunch at 60km. Every 5km there is a marker along the road, today had started 480, 475, 470,… I was amused to see that instead of “420” there was a milepost “421” instead. Most likely to keep people from stealing the sign.

Once up top, there was another brief drainage to cross to reach ~1100m and after this a good descent into Iskut. In this stretch of road, the headwinds picked up and it was still cold. Saw a B&B and was tempting to stop here, but continued to reach Iskut store at 82km. While I didn’t need further supplies, this one would have been sufficient to stock up on provisions (unlike Good Hope Lake). After this another 16km south of town, most of it going along the lake before reaching the Tatogga Resort. 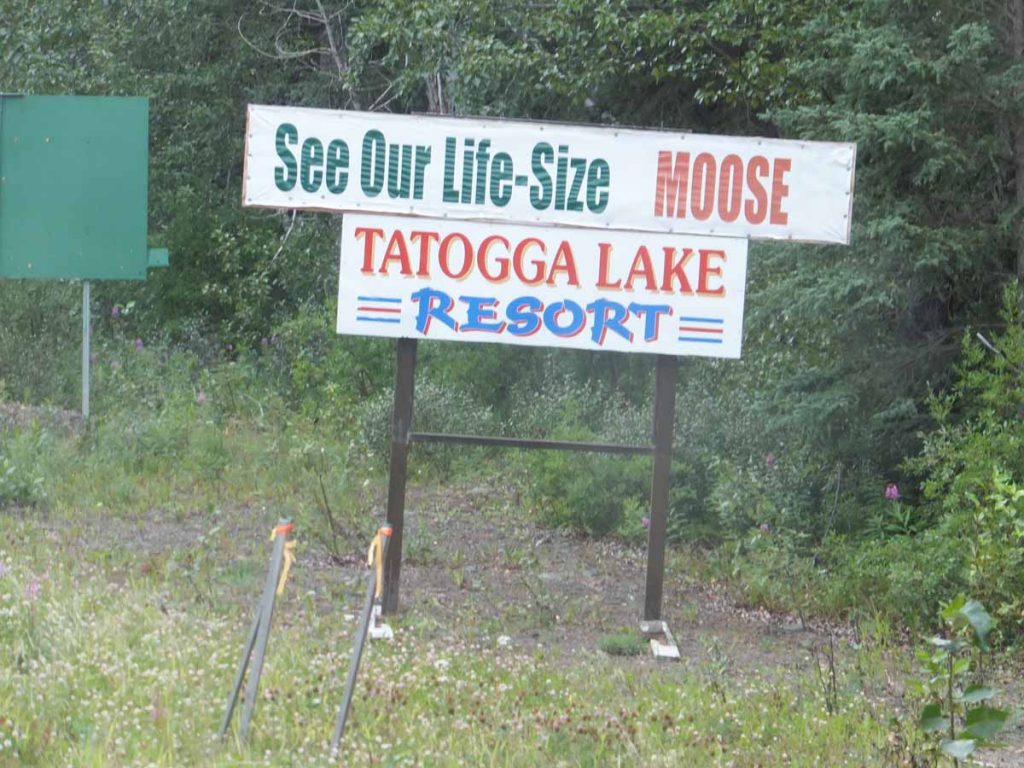 I was motivated to reach here, not so much to see the moose but instead to get a motel room out of the rain (more expected overnight) and recharge here for the next segment of the Cassiar. Overall, it never got much above 12C and particularly the first ~60km were rather cold and wet. While the lodge does have the moose mentioned above, it also has a rather nice set of overview maps so can get a sense of the terrain ahead.