Two days cycling brought me to somewhat larger town of Ciudad Constitution. I split the distance by making a shorter ride to Ligui yesterday, the last town on Sea of Cortez, and then a longer ride today. 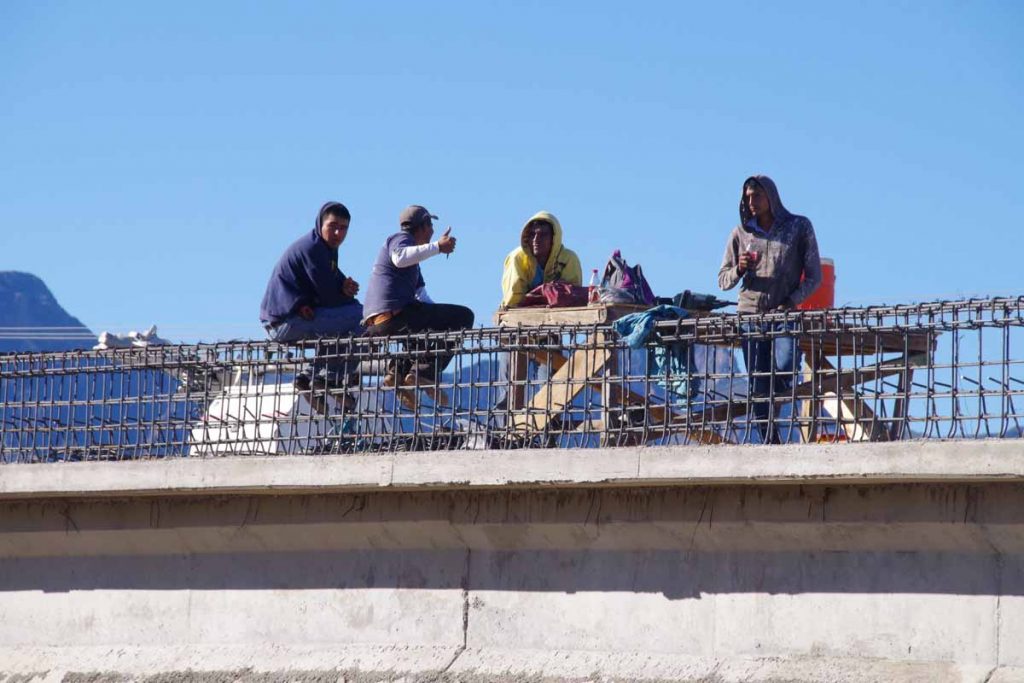 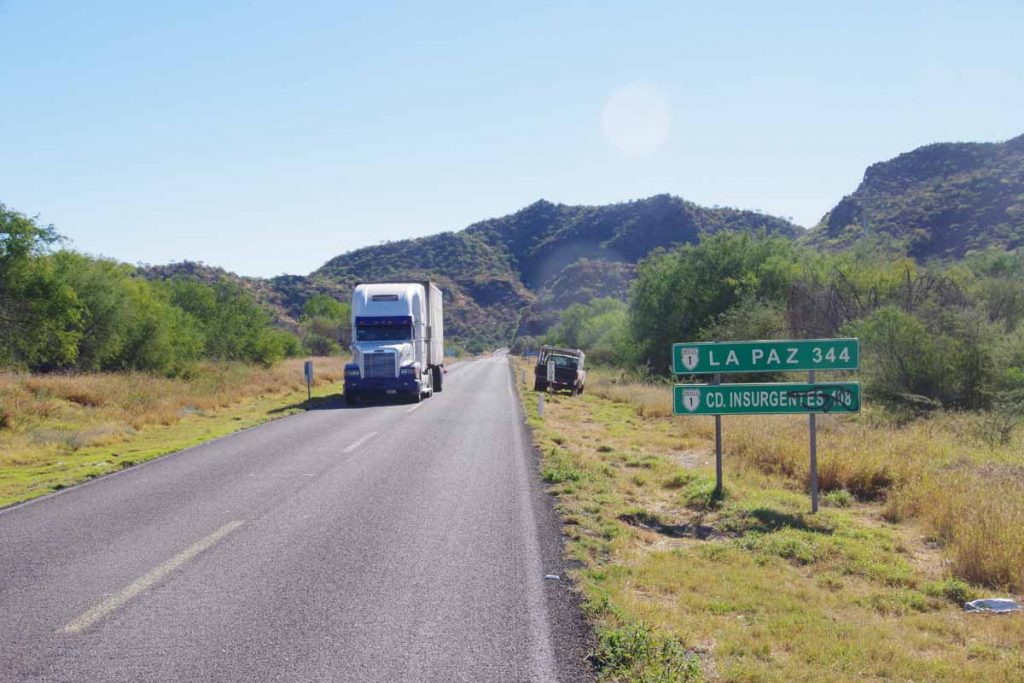 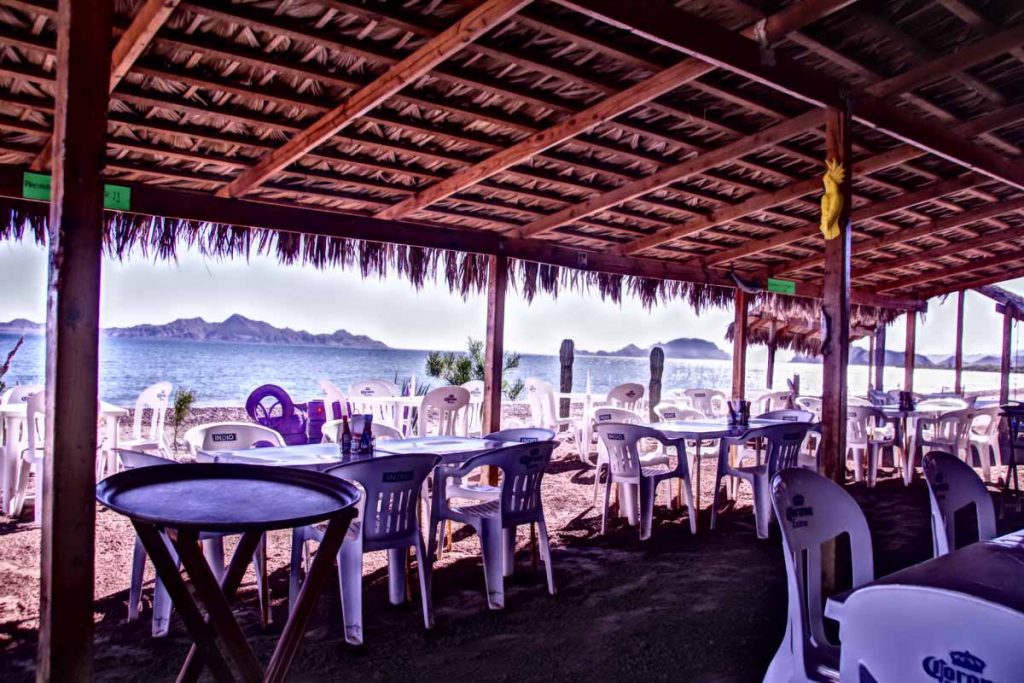 At 17km, I stopped and had breakfast at Vista del Mar restaurant. Photo was taken with camera “HDR” mode to bring out some of the contrasts. It was nice pleasant stop. 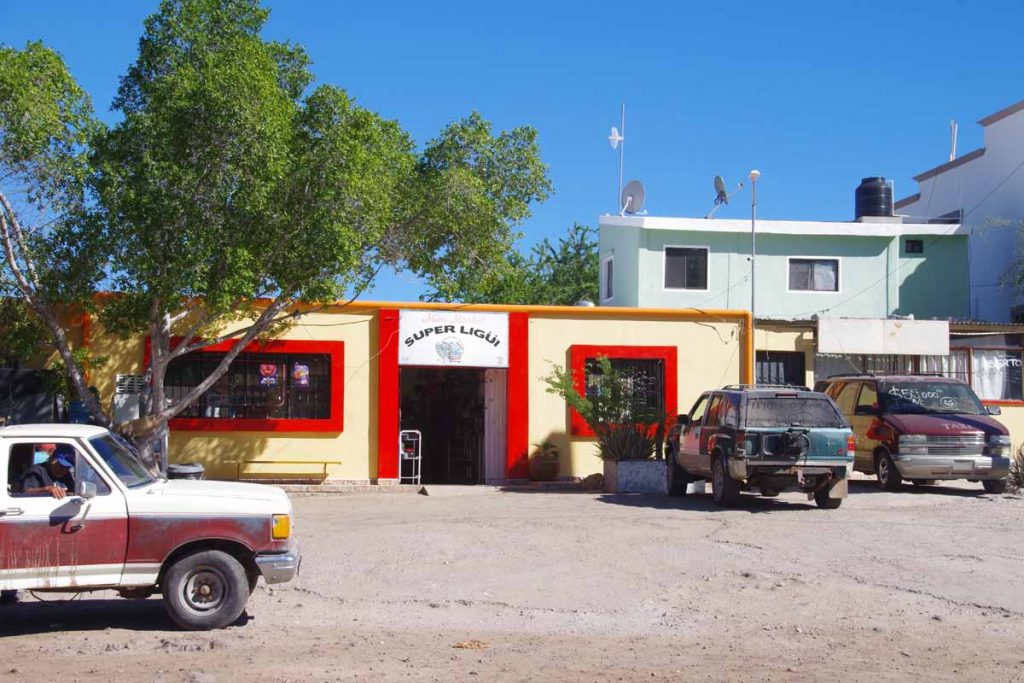 Despite leaving late and stopping for breakfast, it was still early when I arrived at the Ligui Mini-Market. Now time to find a place to camp. The recommended place seems to be out at the beach, so I headed out to the beach. 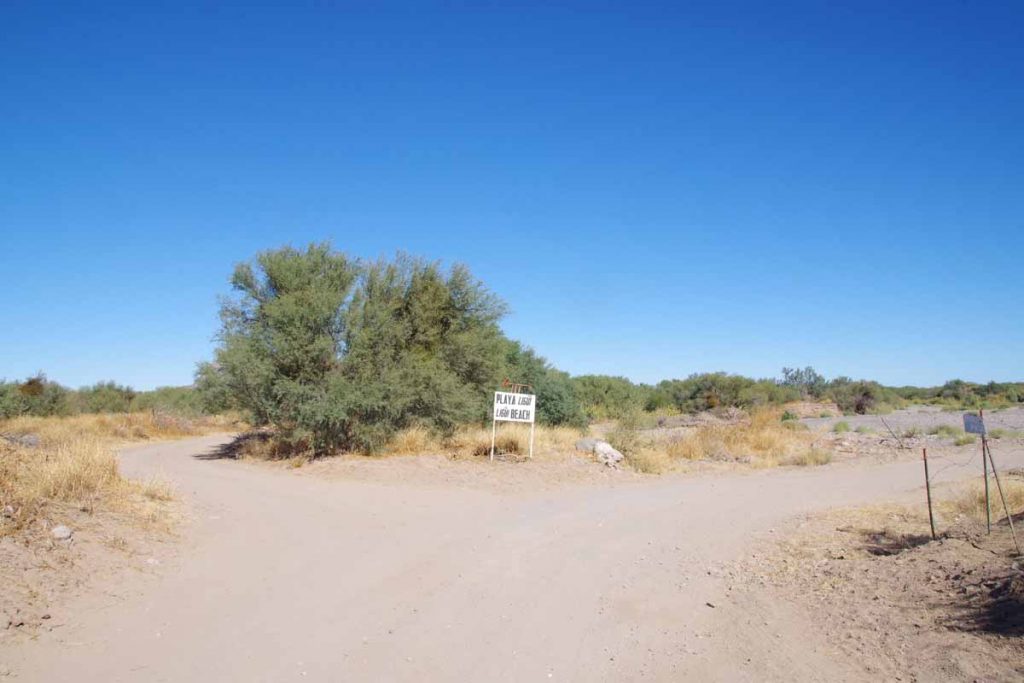 A little over a kilometer later, I had followed this sandy road and was at the beach. It hot and not particularly appealing place to spend an afternoon. So, I headed back to town and figured I would see if I could find a cooler place to spend the afternoon and perhaps a better place to camp.

There was a small police office next to a large pavilion. With my broken Spanish, I had roughly the following conversation:
– Where is camping?
– Camp at the beach?
– It is hot at the beach and there are flies (I didn’t know the word for flies so had to make little buzzing examples)
– We will have an event with many people at the pavilion at 5pm. So not good to camp here now, but if you come later around 7pm, you can camp here.
– Confirm 7pm, mucho gracias.

So I found a nice spot to relax in the town. It looked like a closed government office, but there were hard plastic chairs outside and some shade where I could read my kindle.

Around 5pm, I wandered over the pavilion to see what was going on. Indeed folks were starting to gather. A little past the pavilion was a small field in rough shape of baseball field. I decided to try setting up the tent there. First try, I found a spot with many goat-head thorns but coming behind a small wall, I found a good spot to pitch the tent. I could also hear the goings on at the celebration. They had a local dignitary/guest speaker and also did some form of raffle of several children’s bicycles. It was a bit more like “bingo” since they called multiple numbers before there was a winner. Not much past 7pm, people started leaving and a little later they turned off the big lights.

I decided my little camp site was at least as good as moving to the pavilion, so slept there for the night. 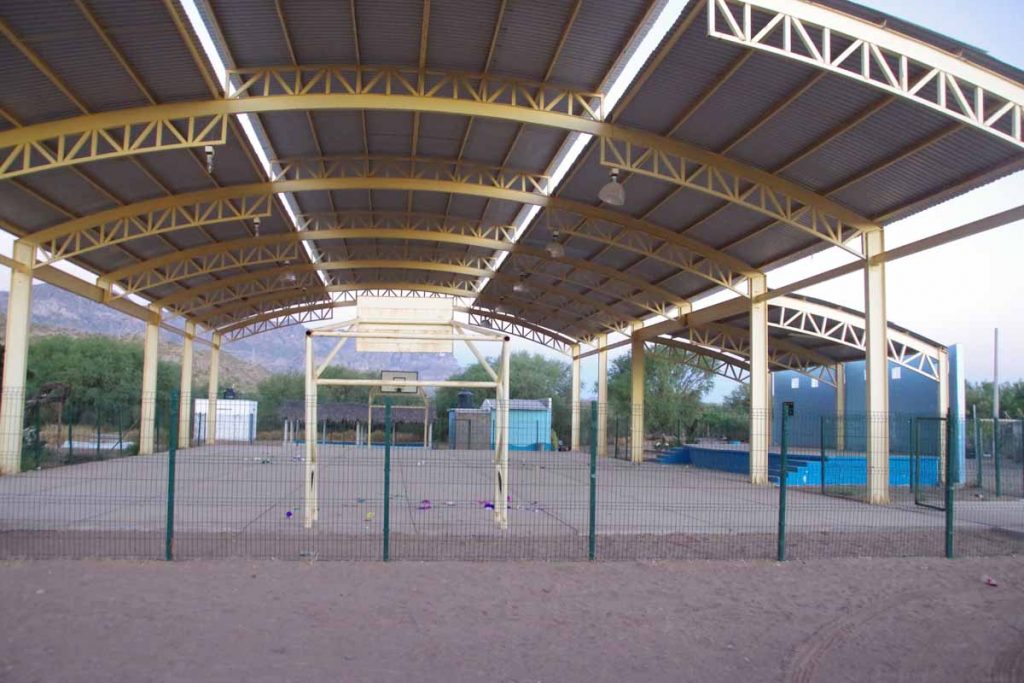 Above is a picture of the pavilion from the next morning. Someone actually came and switched on the lights at 5am and rustled around for a while, so just as well I didn’t camp there. I was up early and back at the mini-market not long after it opened at 7am. Ate breakfast and topped off on water before setting off for a longer ride. 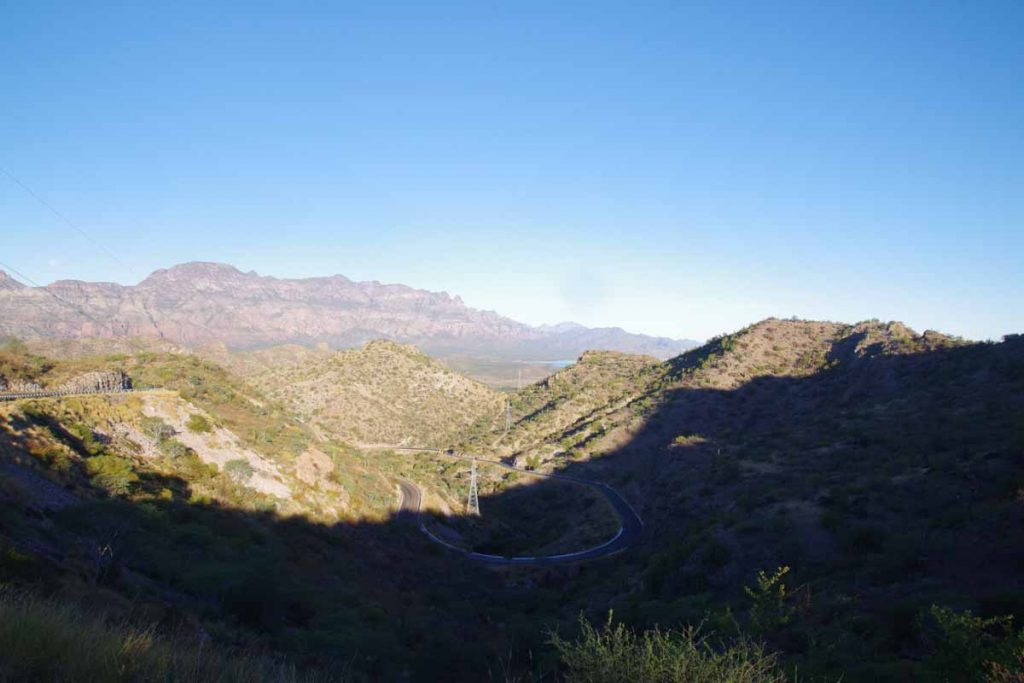 The first 1.5km was flat and then next 8km had a solid climb of 370m (1220ft) with some steep parts. Fortunately, it was still cool and I was fresh for the climb. After the 10km, some rolling terrain and slightly higher pass to cross over. 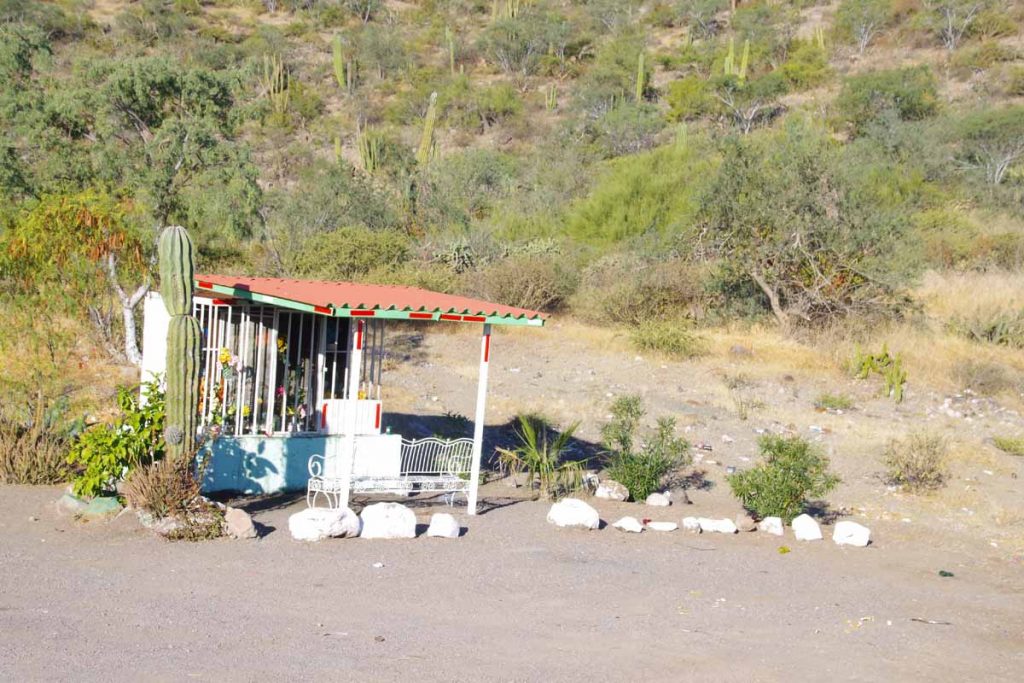 Rather elaborate memorial I saw along the way. 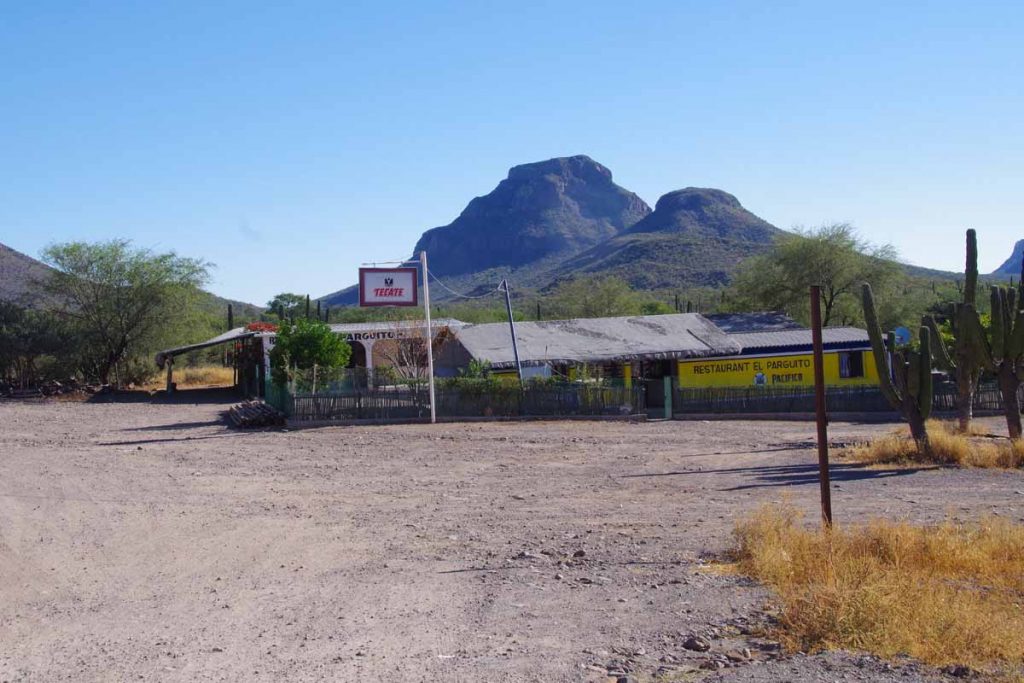 At 22km was the only confirmed spot to refuel in first 85km, a restaurant at turnoff to Agua Verde. The word “restaurant” is on the building, but it is a very simple place with a few snack food items and some bottled water. Enough to take a short break, drink some cool water and get back on the road. 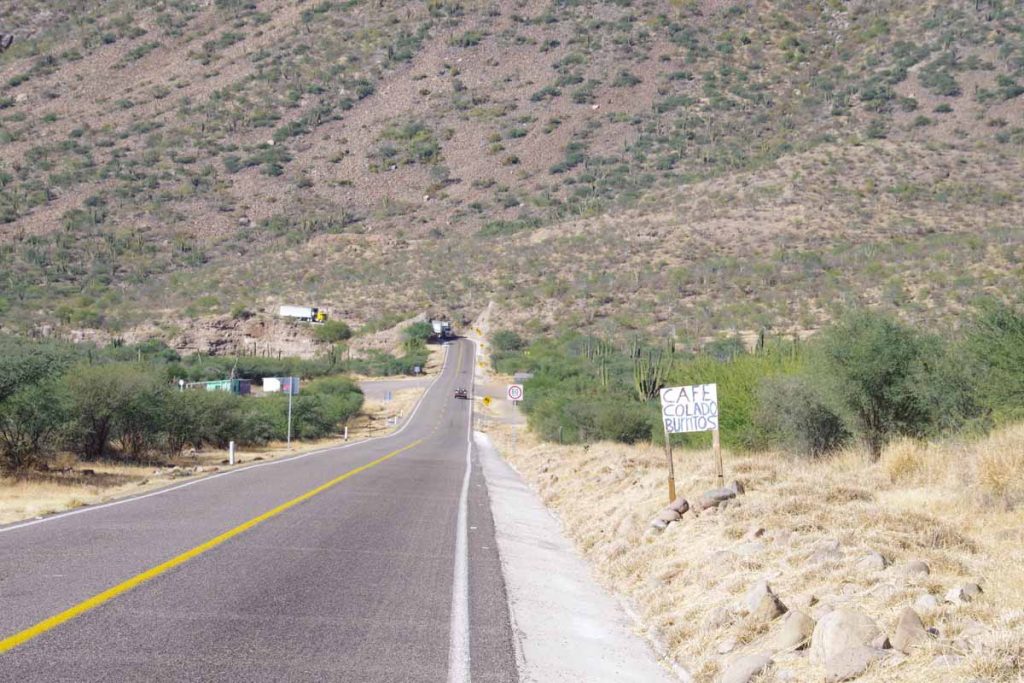 At 30km mark, I was pleasantly surprised to find this sign. 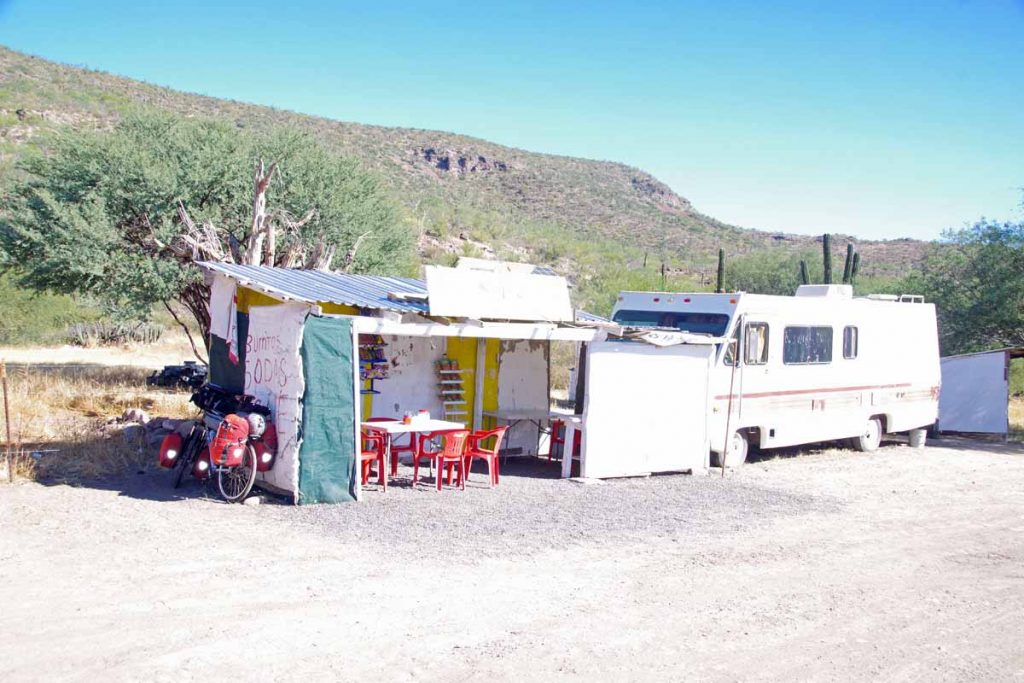 Nice little roadside spot and a cold coca-cola definitely was a welcome change. From here the road followed a valley for a bit and then made a climb back at the 45km mark. After this I left any valley and was in wide open desert land. There was a gradual descent. I had a side wind, but fortunately not too much. Otherwise, it was a steady ride for next 40km to reach Ciudad Insurgentes. 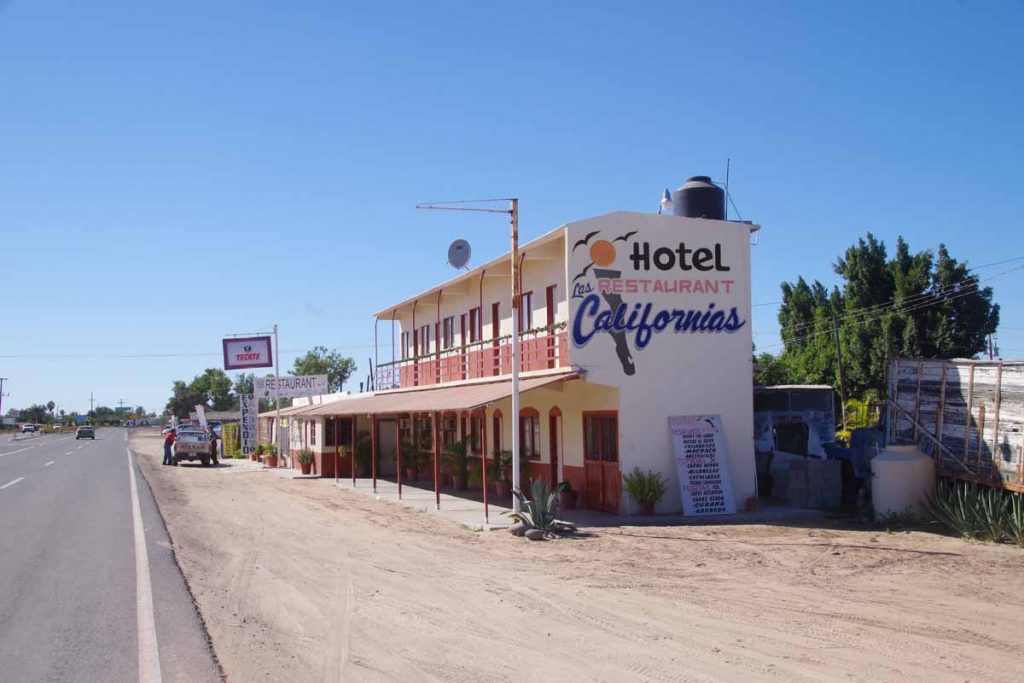 At entrance to the town was Hotel Las Californias, though I didn’t stay there. My odometer said 85km, the thermometer said 35C (95F) and I was happy to find a small store for cold liquids and chance to refresh. Decided to ride just a bit further to next larger town. 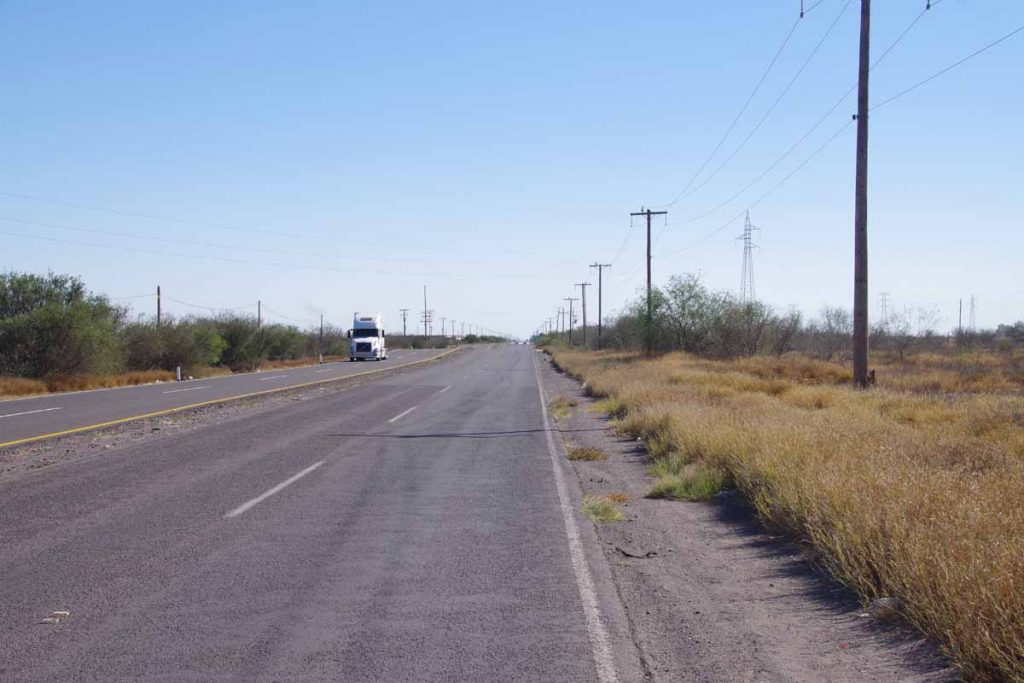 The road south of town became four lanes, but fortunately not much traffic. 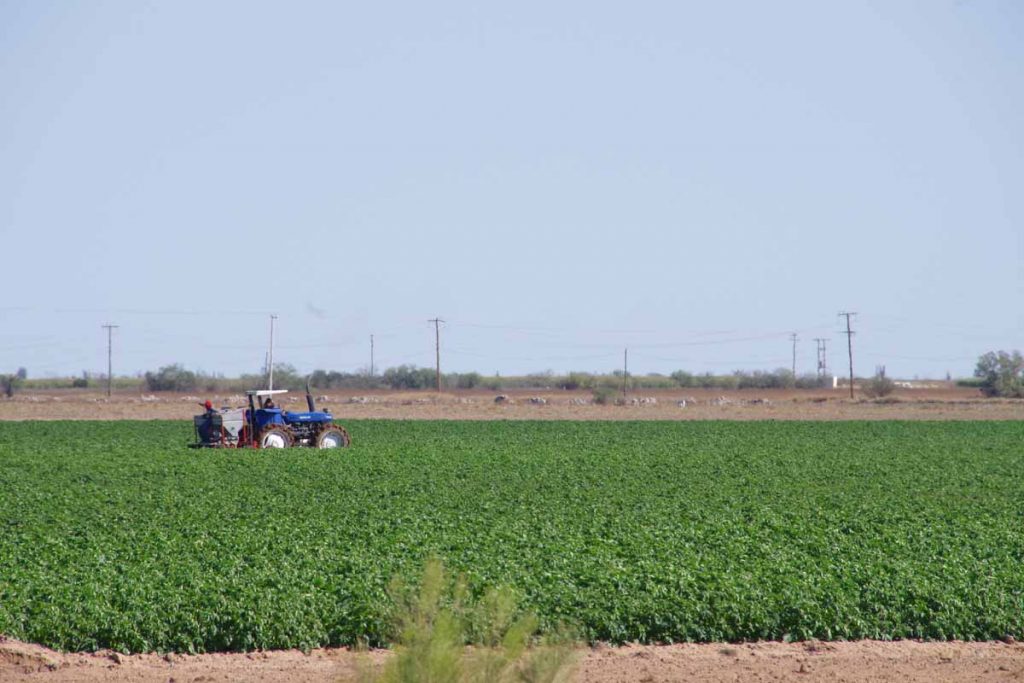 This area was first I had seen in a while with some agricultural fields. I even saw a few center pivot sprinkers to bring water onto the fields. Not sure how much will grow without some irrigation. 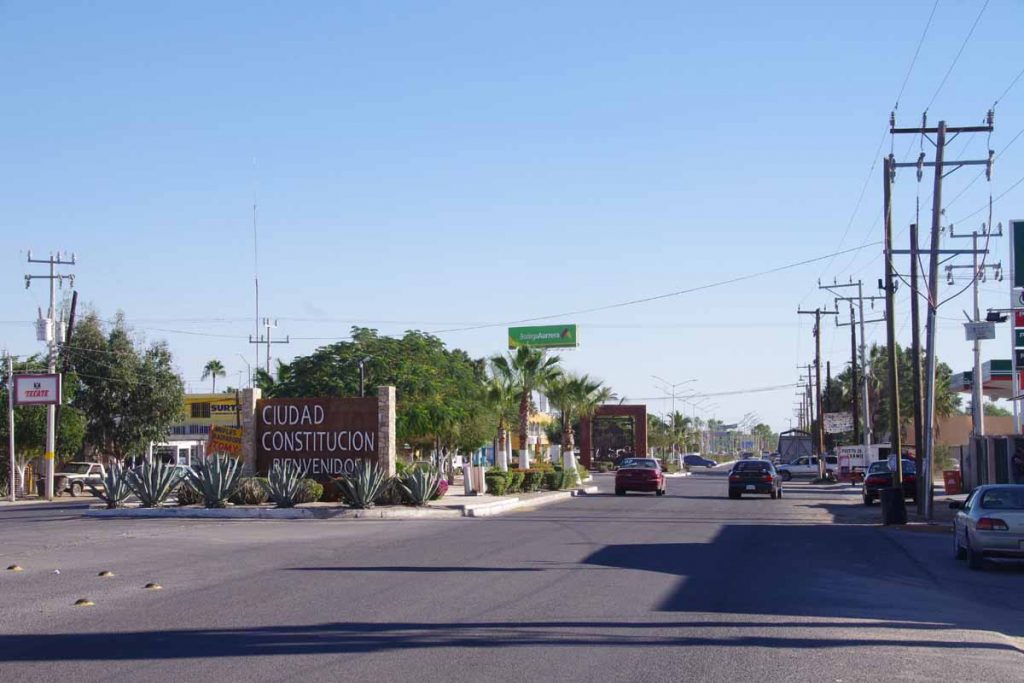 At 110km, made it to outskirts of town and cycled until found a reasonable place to stay. At this point, think I am two solid days of cycling to La Paz, though I have a number of extra days before my ferry reservation (including some days to ride south to Los Barriles), so may take a rest day here.