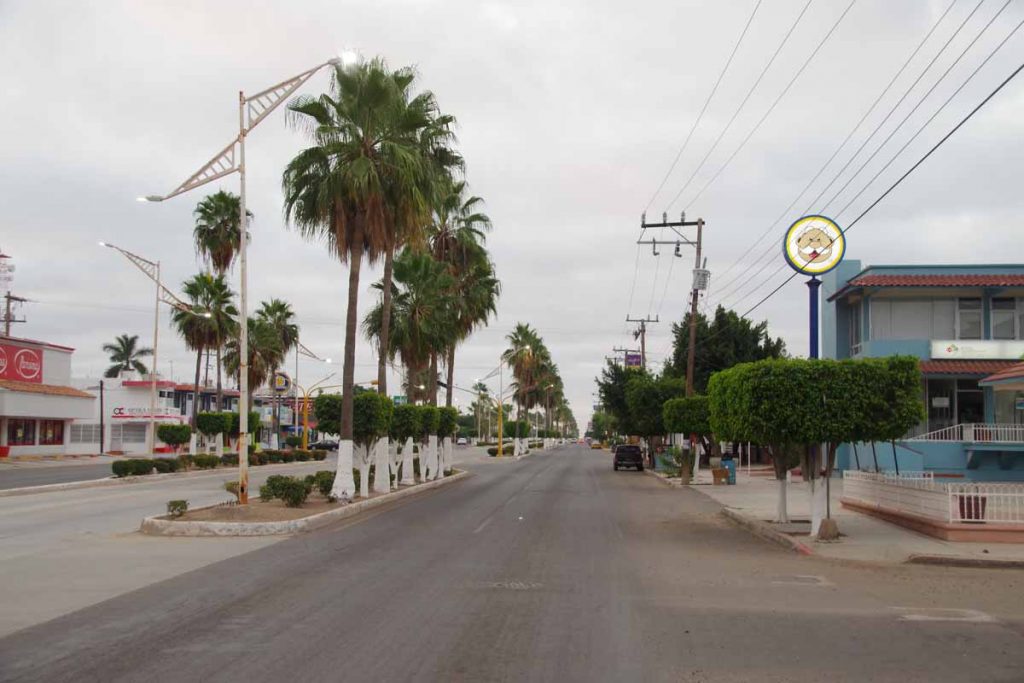 What a difference the wind makes. Two days cycling, first one averaging 17.2 km/h and second 13.9 km/h. Neither real fast, but definitely had more favorable winds on the first than the second day. 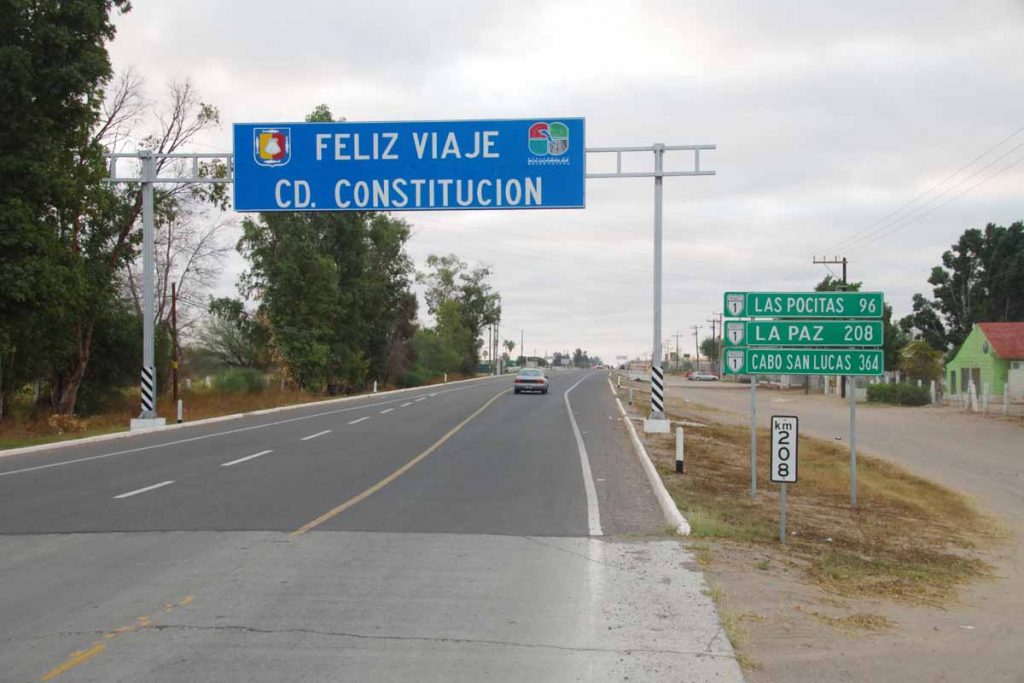 The goal was simple: make it to La Paz in two days. I had cycled 3km when I came to sign outside Ciudad Constitution, so plan was to ride to El Cien (cien == 100) the first day and the remainder on second day. Road started out flat and straight with a shoulder. 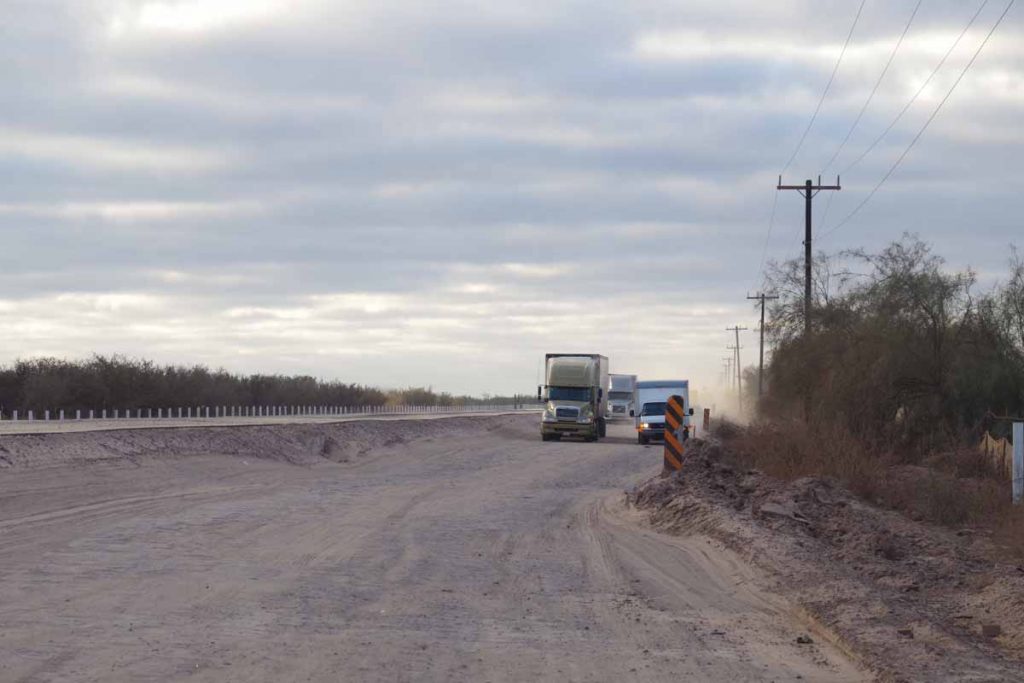 At the 8km mark, there was suddenly 7km of construction. My speed slowed as I picked my way along the dusty and sometimes sandy bypass road. It was nice to be through that construction. 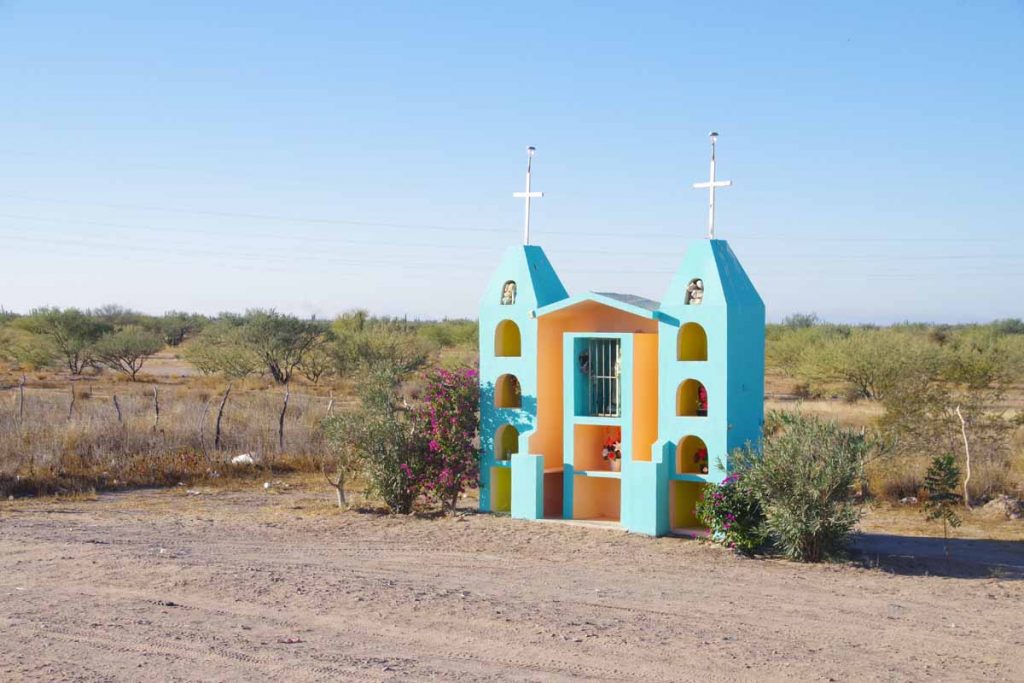 Soon I was out cycling through more desolate regions. Seems like some of these shrines have been getting more elaborate. Also seems like a cross between simple memorials for those along the road and some more extensive shrines. 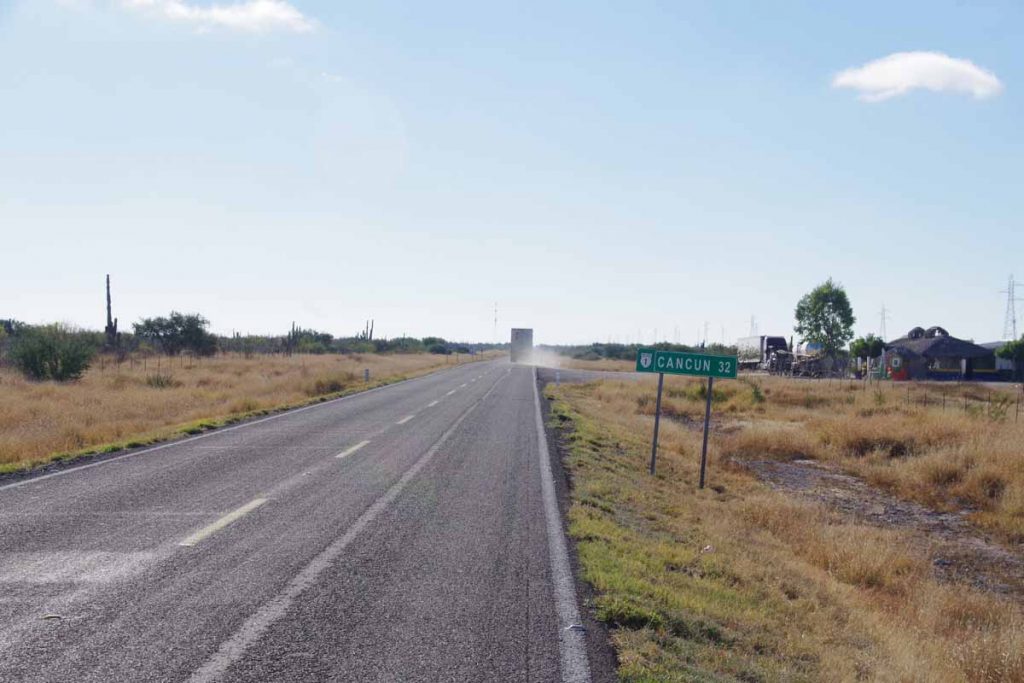 The shoulder went away but not too much traffic. Also nice to have a light tailwind in this section. 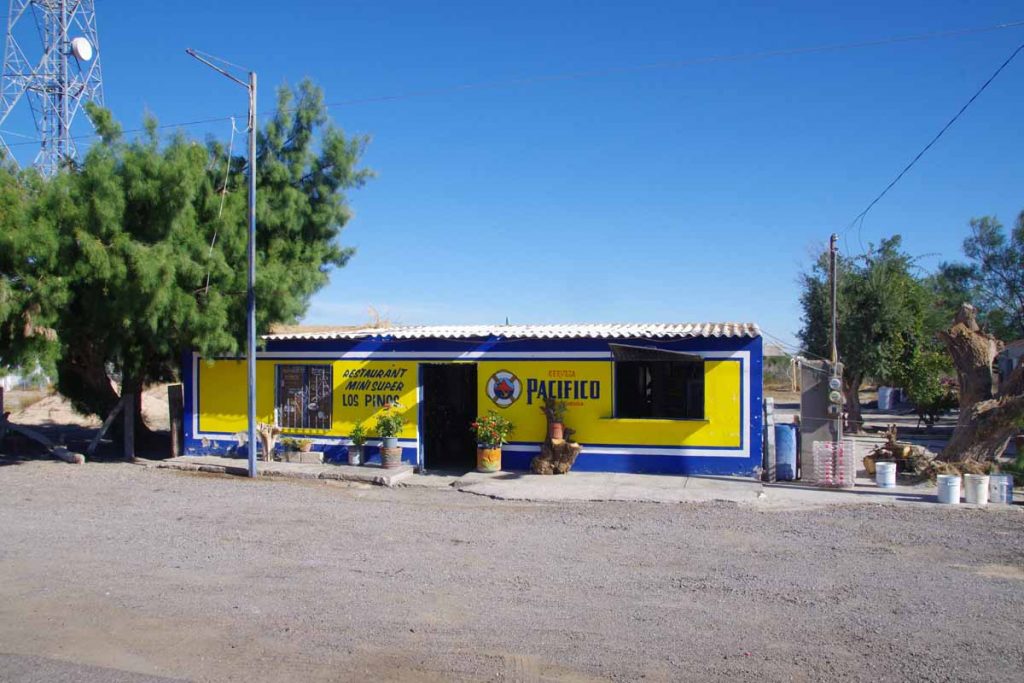 Without too much trouble, I had ridden 50km and was at Santa Rita. This small market had yogurt and water and all I needed to get replenished. After this the road turned to have more of a cross-wind and also some slight rolling hills. 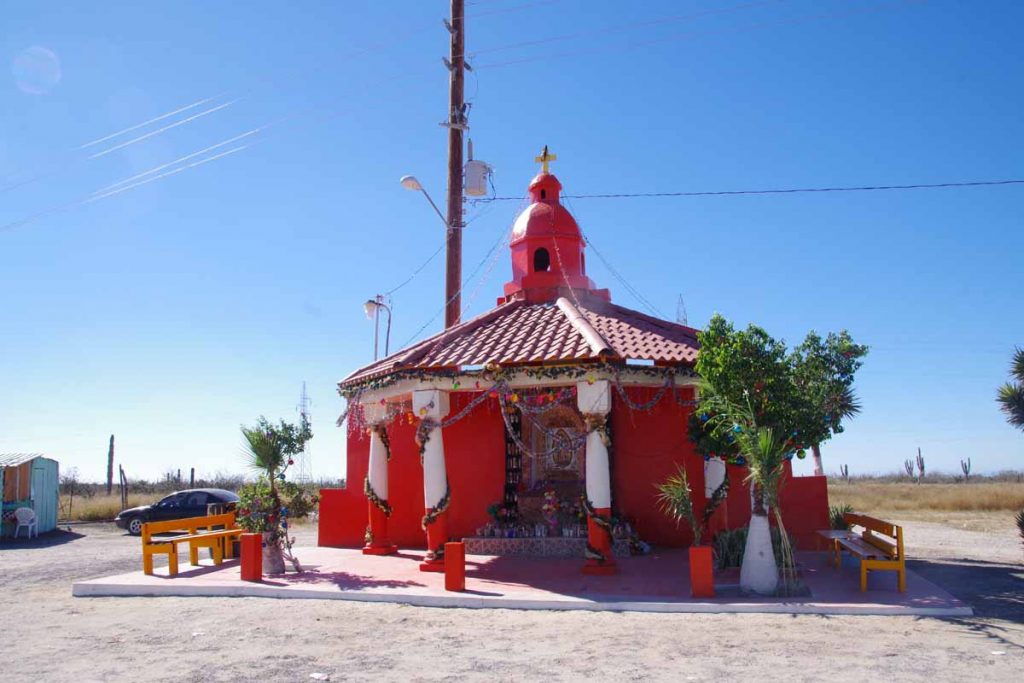 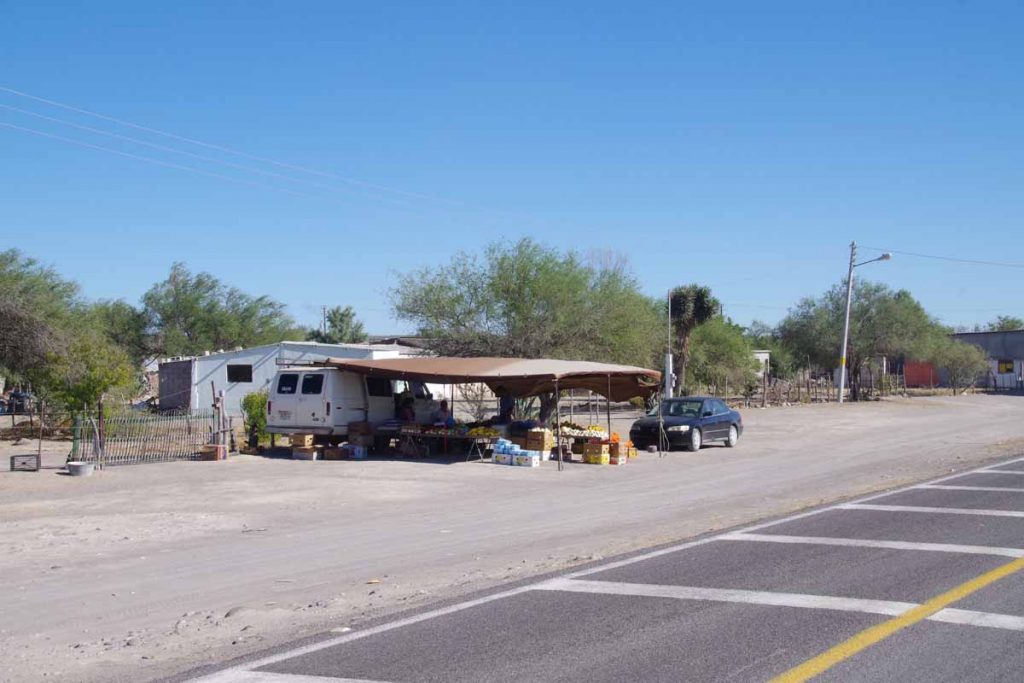 Settlement of Las Pocitas was big enough to have an OXXO and also this small fruit seller. Had a late lunch and relaxed for a bit. 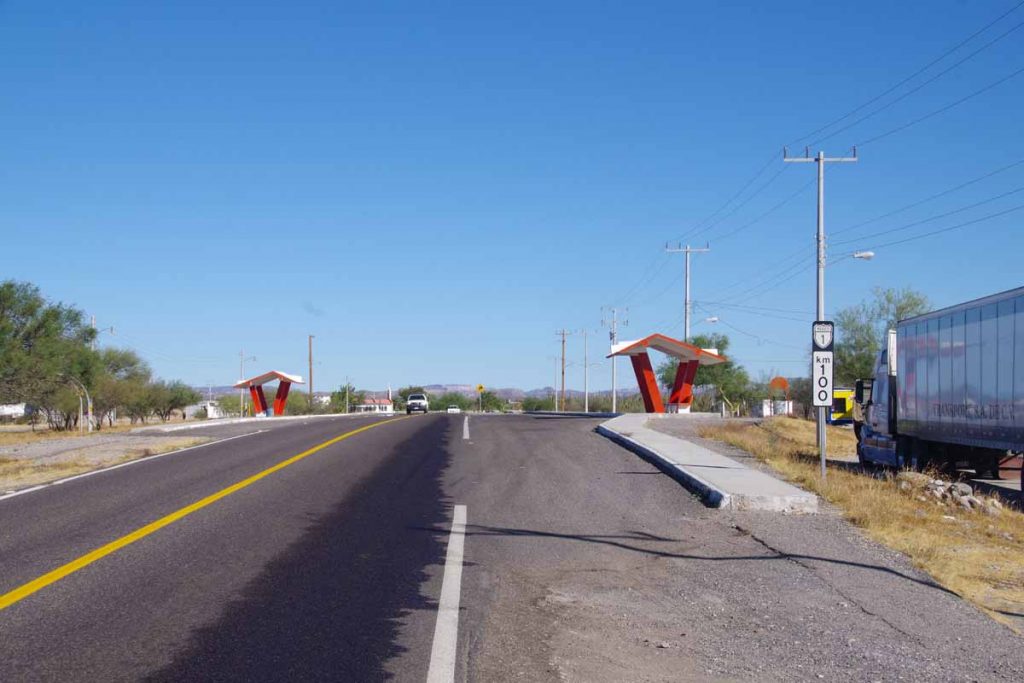 El Cien! Made it to 100. There was small loncheria here. Also found the local church and camped behind it. 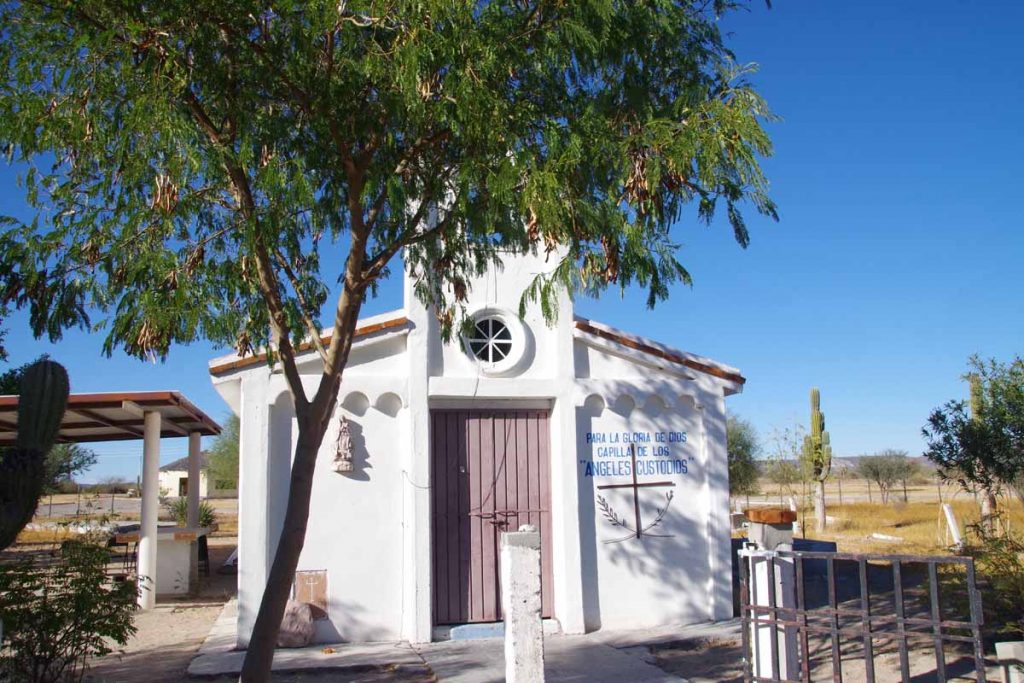 Overall, a not too tough day and pretty ride. Camping behind the church was peaceful and great place to see the stars. 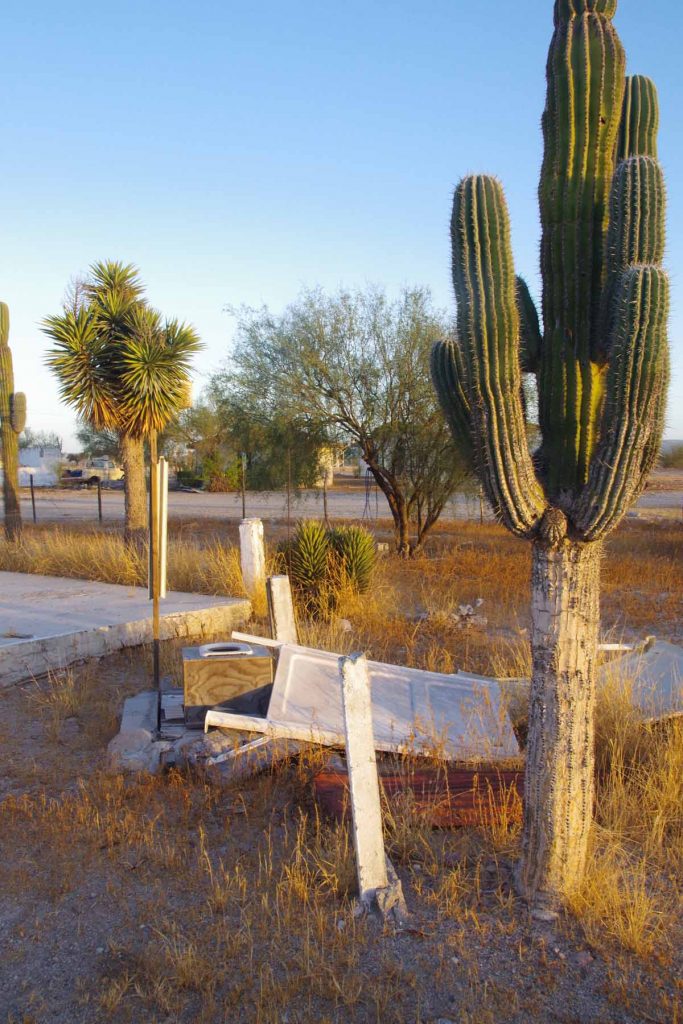 Church even had an outhouse. OK, well the “house” portion was missing, but otherwise seemed to be in use. Next morning got ready to ride remaining 100km. 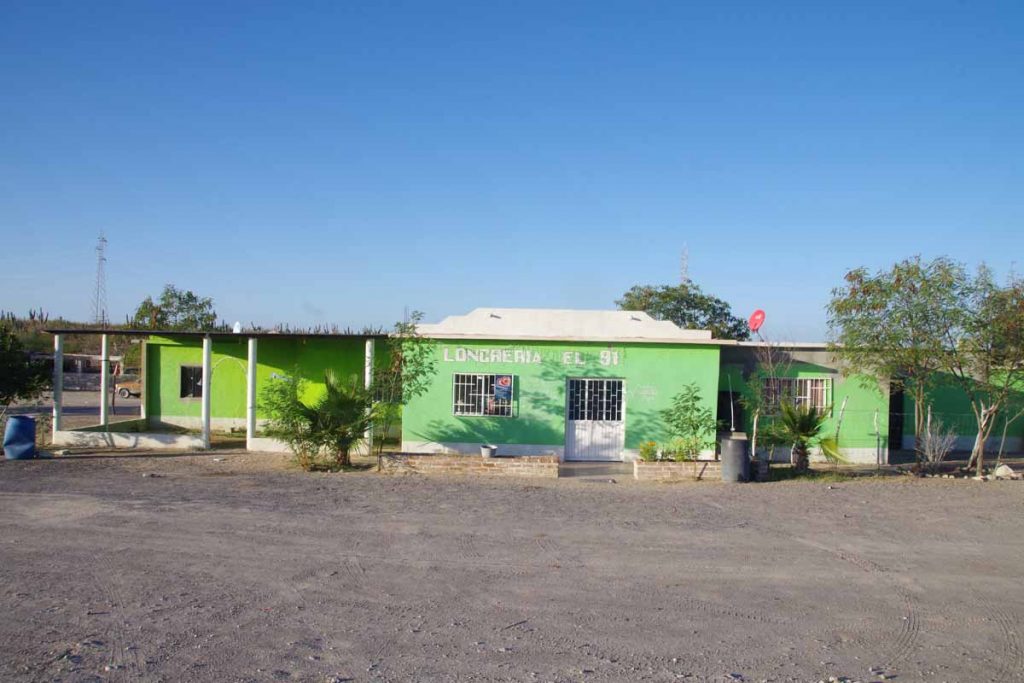 Several of the loncheria in this part have the km marker as part of their name. This road had a few more hills. It went roughly downwind to the 77km mark where I stopped at a loncheria to refuel. After this point the road turned and it became more difficult cycling. 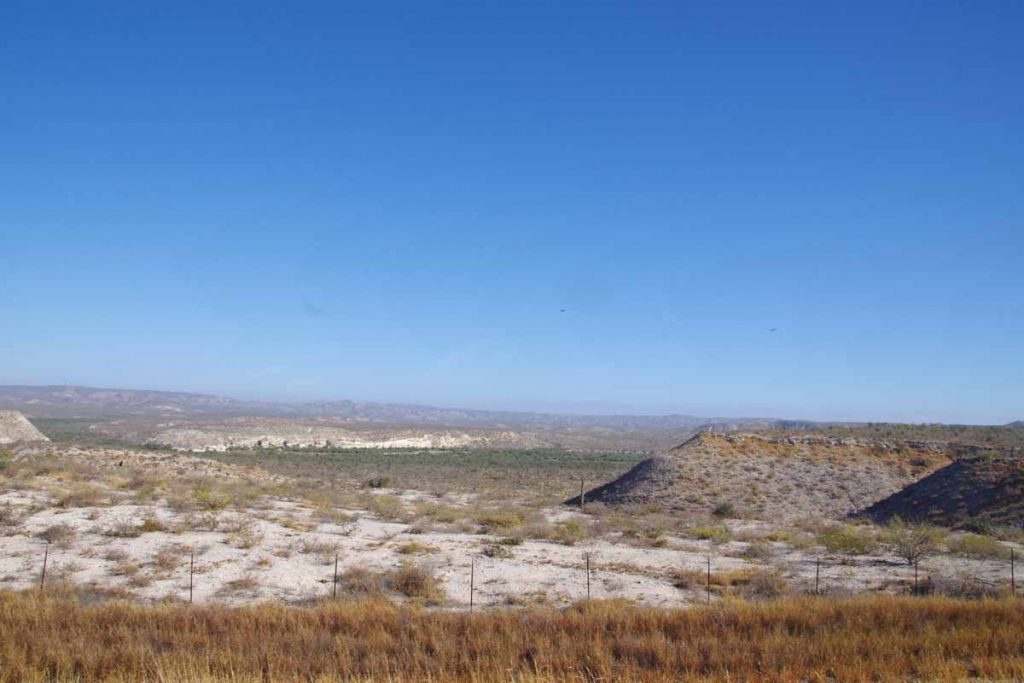 This area has many small mesas and buttes. Pretty country overall, but also more climbing than the first day. At 50km, also came to several kilometers of road construction. This was tougher than yesterday, since the temporary road went up and down some steep sandy hills. I ended up walking a few. Also after initial construction, the road turned much more into the wind. Hence, had a tougher riding. 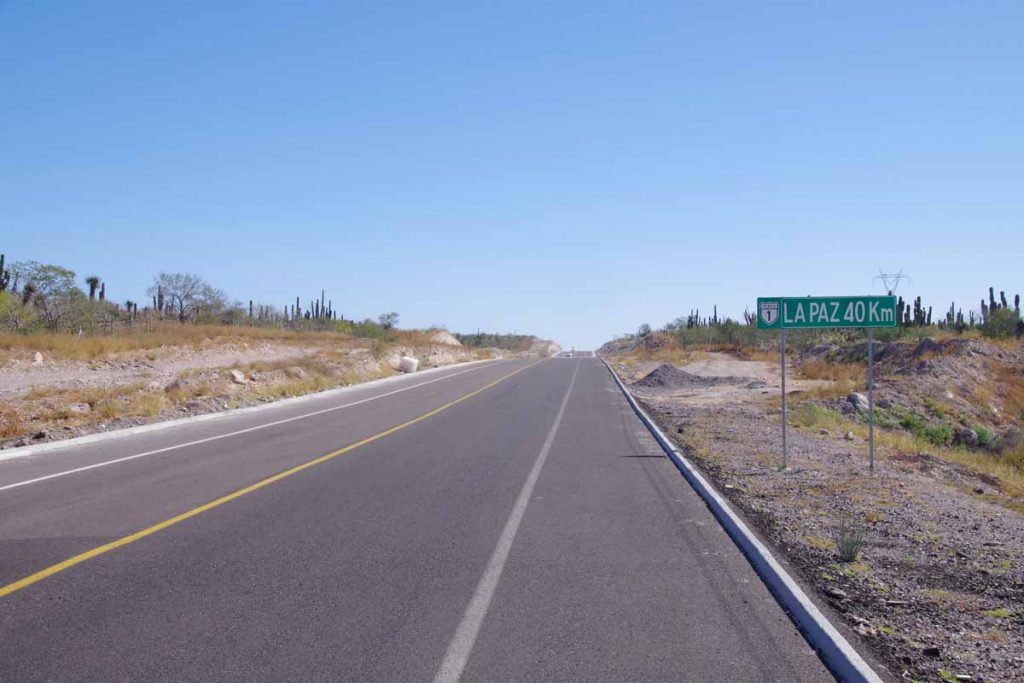 Nice to see kilometers count down. At 70km mark turned more sharply into the wind but also down hill. Went through an agricultural control point and then this Pemex station. 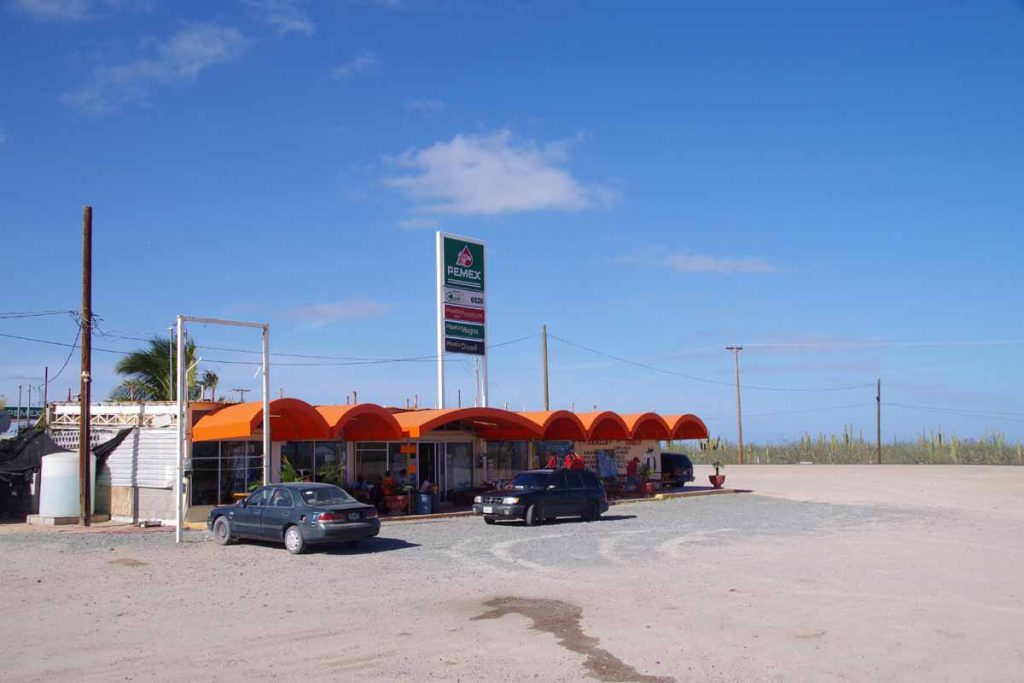 At this point at 82km, the area already seemed a bit more urban, with two lanes of traffic each way. 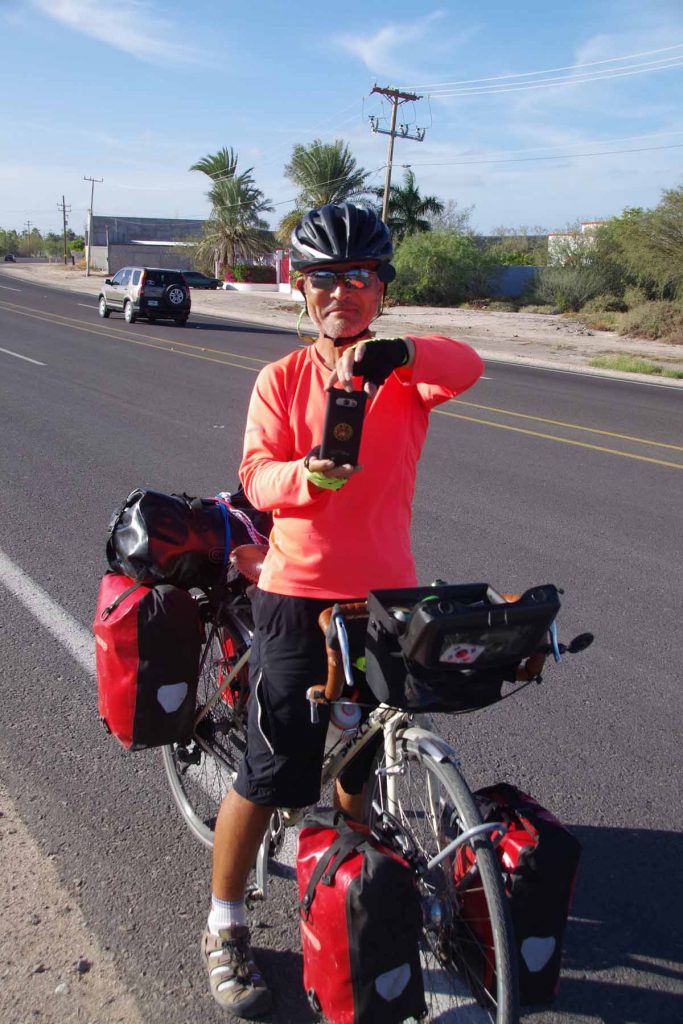 Met this cyclist from Korea who had started his ride in Vancouver, BC and was headed to Cancun. 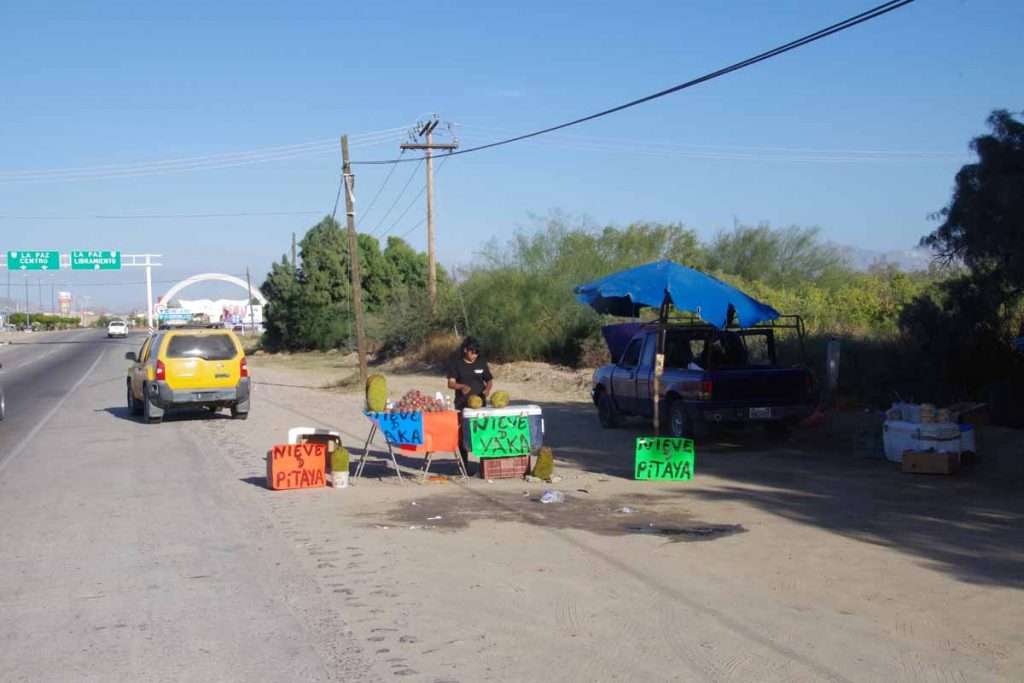 The last kilometers were busy. At 92km, I came past a sequence of big box stores, e.g. Walmart, Home Depot. From this point I decided to take a bypass road to head around La Paz instead of straight into the center. Even had a guy in a convertible stop and offer unsolicited advice, “Going to Cabo? Take a right at next light and then 96 miles further”. While, I’m not headed all the way to Cabo, I did cycle a few kilometers south of town so am now 7km from town center. Plan is to ride to Los Borriles.

Overall, second day was more exhausting than first, mostly because of the winds, though construction (both days) and hills (more second day) also played some role. Nice to be close to La Paz.