Back in Mendoza after a nice visit to Colorado.

I swapped in a new front tire and went for a test ride. All seems well. Nice to have a new tire, two new spares, a new mirror, new gloves and a new Camelbak. After almost three weeks off the bike, it will be nice to ride again.

Monday is Chilean Independence Day. The agreement that I had with the hotel was two nights reservation in return for their keeping my stuff while I was gone. This way they don’t as easily get stuck with an empty room that Chileans might otherwise rent for a long weekend in Mendoza. If there had been a window of good weather followed by worse weather, e.g. wind/rain coming, then I might have gone early but forecasts look good for a while and I have some time, so one day in Mendoza to put everything in place for departure. 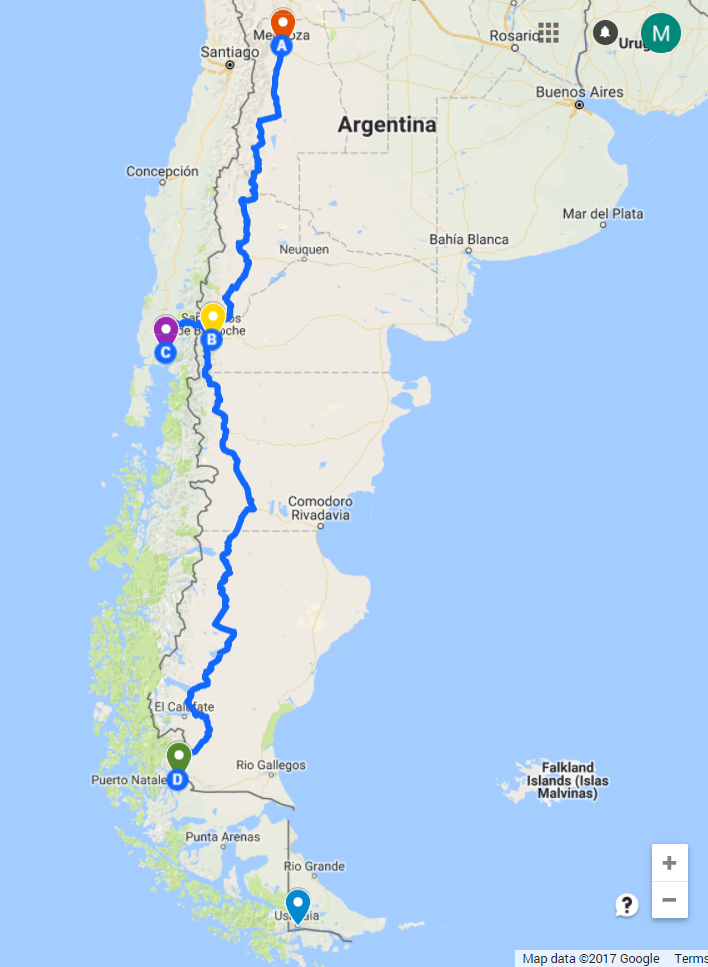 Plans can always adjust but following is the rough idea for the next nine weeks until I need to be in Puerto Montt (purple pin) to meet TDA:

From Puerto Montt, TDA takes 29 days to get to Ushuaia including 16 cycling + 6 rest days to Puerto Natales and 6 cycling + 1 rest day to Ushuaia. So if I do cycle to Puerto Natales on the Argentina side, then I will see bits of Patagonia from multiple angles. First two weeks of cycling before I get too far ahead of myself.