Two days cycling brought me to West Yellowstone. Both days with cooler temperatures, but weather forecasts look good from here. 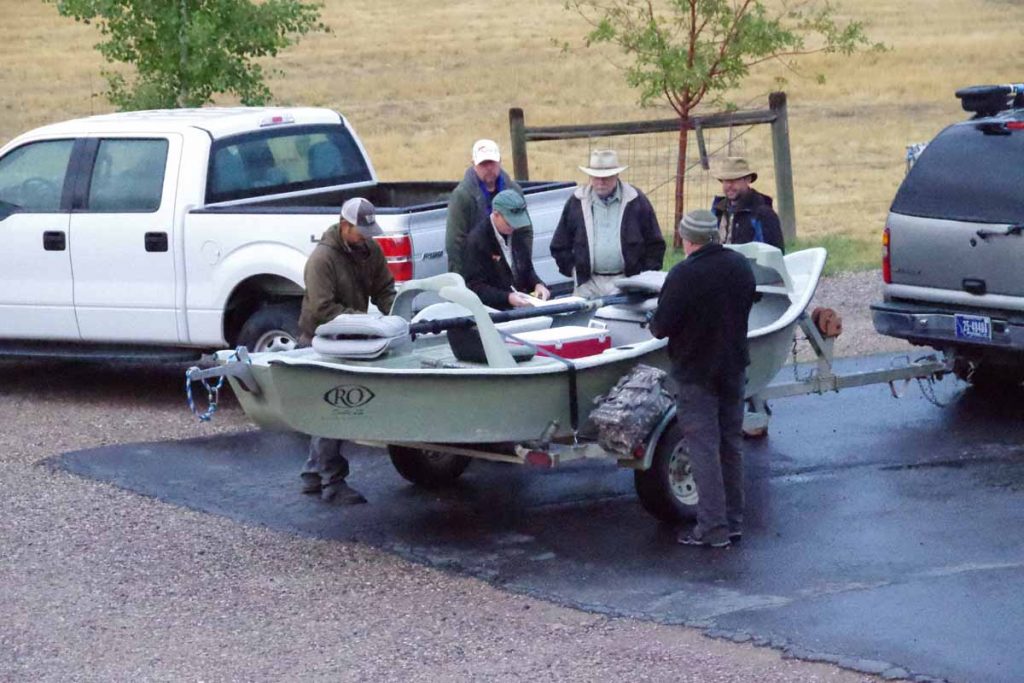 Fishermen were getting ready early as I prepared for a cold day of cycling following my rest/rain day.

Sunday had been cold and wet in Ennis. Good time to drop by laundromat and otherwise take it easy in Ennis. Wet weather was forecast to continue Monday morning, but other than periodic showers, Monday was definitely better than Sunday. 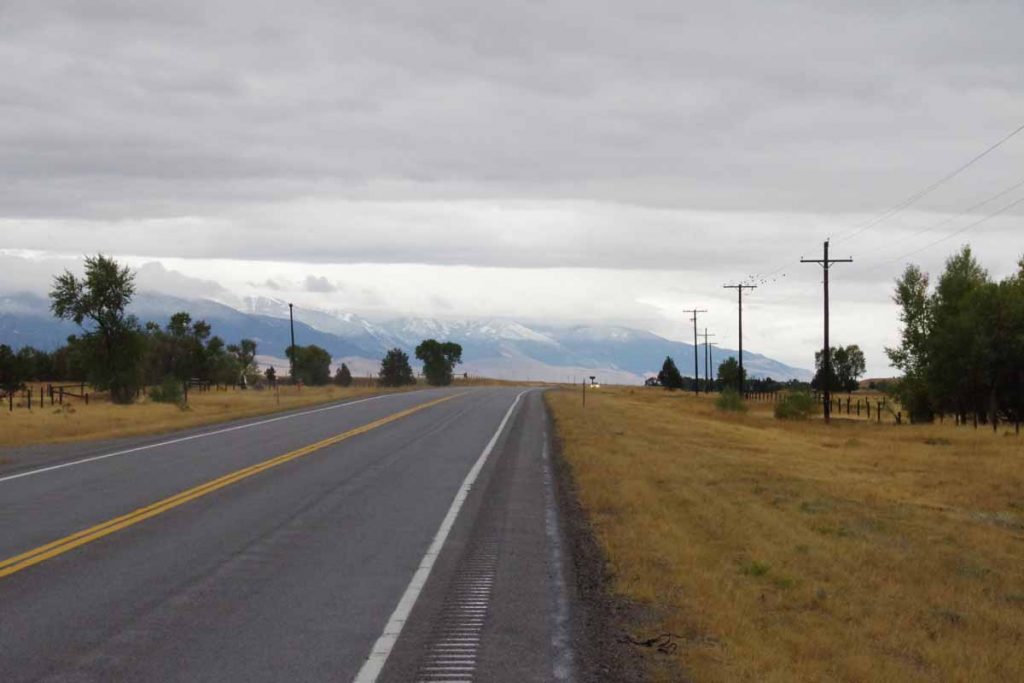 Photo above gave a nice overview of the day. Water in the rumble strip divots and snow up on the higher peaks. The distance was only 38 miles but included 1100 ft of net climb and some headwinds on the second half of the ride. 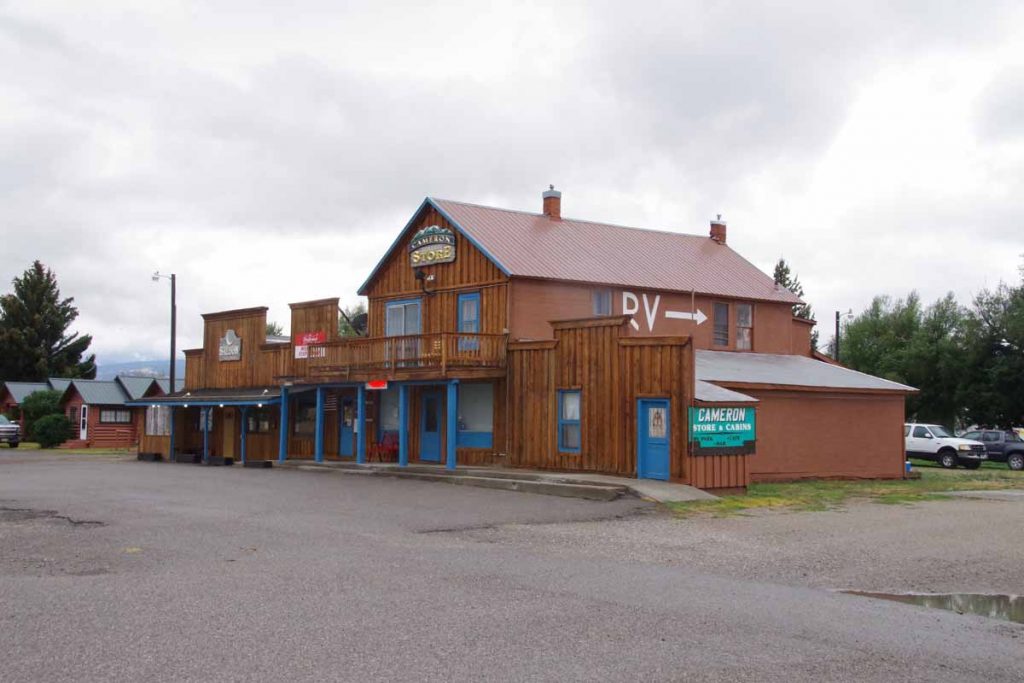 At 11 miles was Cameron store which was closed for Labor Day. However, it was still a good spot to shelter from the wind and eat a snack. After that, continued to follow the road as it slowly followed the Madison River.

There were several boat ramps with access to the river. I saw a number of boats like these. Seemed like one person was guiding the boat with oars while others might stand in the boat with their fishing rods. Stopped briefly at a rest area at 34 miles and then cycled the last bits to a placed named “Driftwater Resort”. It was still overcast and cool (7C or 45F) when I arrived but later in the afternoon the sun came out again and it warmed a few degrees.

Overall Driftwater Resort was a nice overnight. In the evening, the bar and grill opened and I had a large enough pizza that I ate two thirds for dinner and left the rest for breakfast.
Day Two
Overnight frost but bright sunshine had me hopeful it would quickly warm up. Some recent snow on the higher peaks. 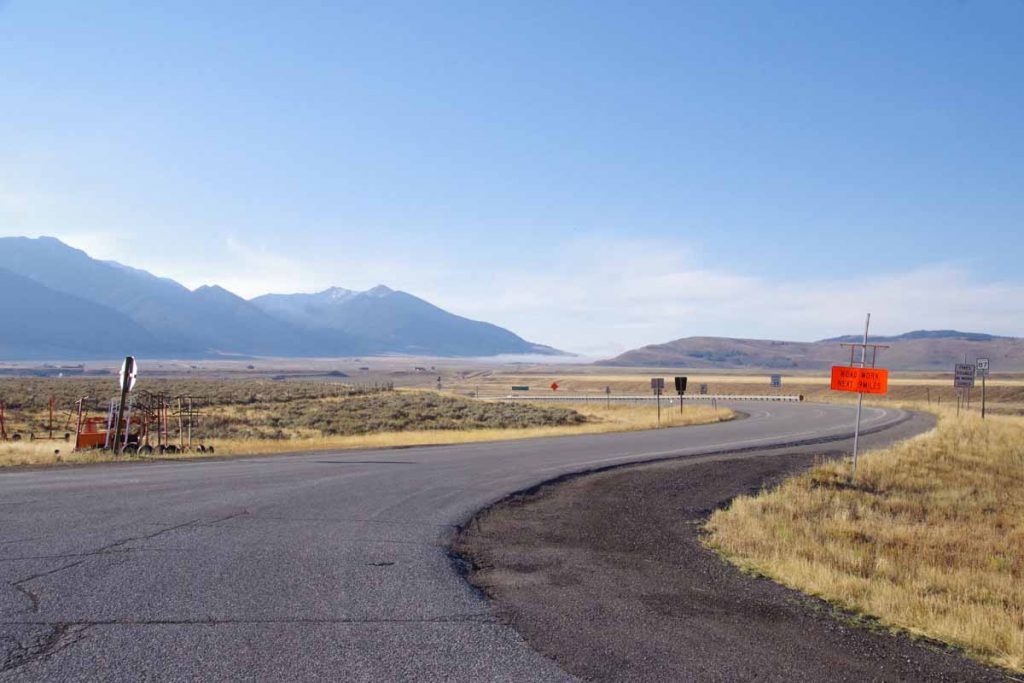 At 2.5 miles the road junction split, though both routes were just about the same distance. This was the other road leading south over Raynolds Pass and briefly through Idaho.

The road I took followed the river and then went via Earthquake Lake and Hebgen Lake. There were multiple signs along the way about the August 17th, 1959 magnitude 7.3 earthquake that hit the area (wikipedia description). Rock slides killed 28 people and blocked the Madison River to create Earthquake Lake. It was interesting understanding more about the story as I cycled past the signs. 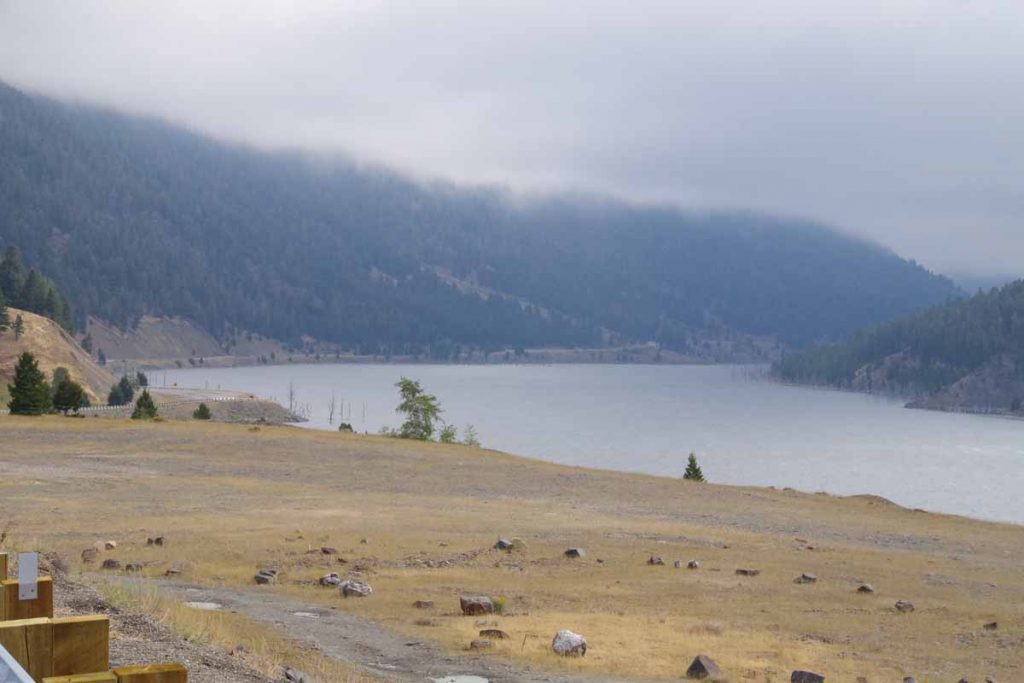 Here is Earthquake Lake. Notice that it had become cloudy and quite a bit cooler, so back to ~2C (35F) for most of this stretch. 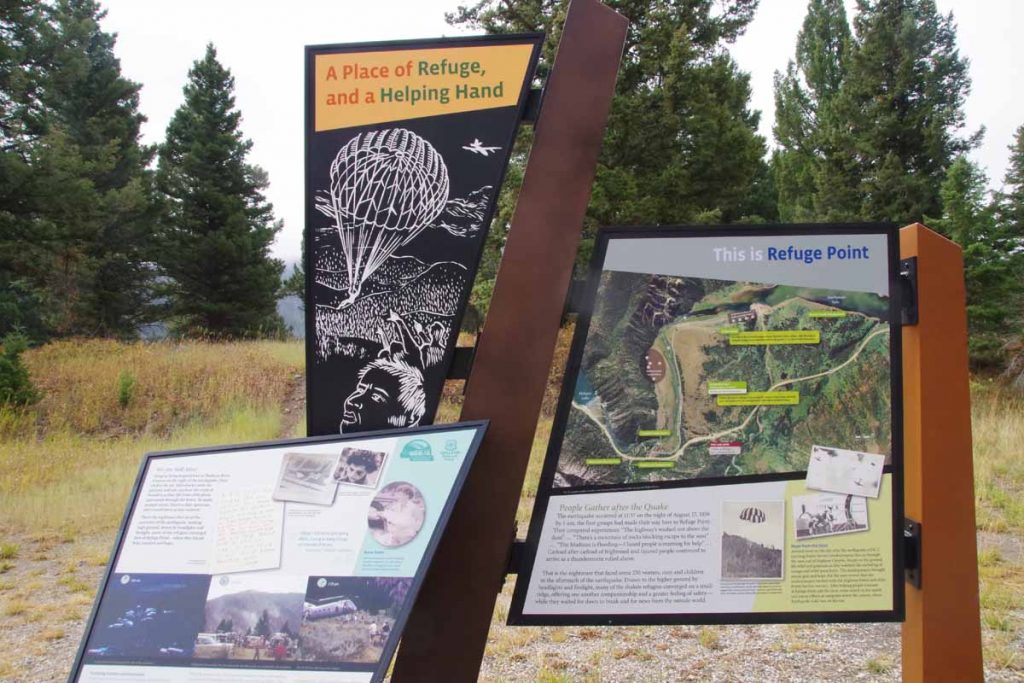 Here was a sign that described Refuge Point. The road had been blocked and survivors made their way here. The mural also shows smokejumper firefighters who parachuted in to help.

After Earthquake Lake, came past the dam for Hebgen Lake (which fortunately held during the earthquake). 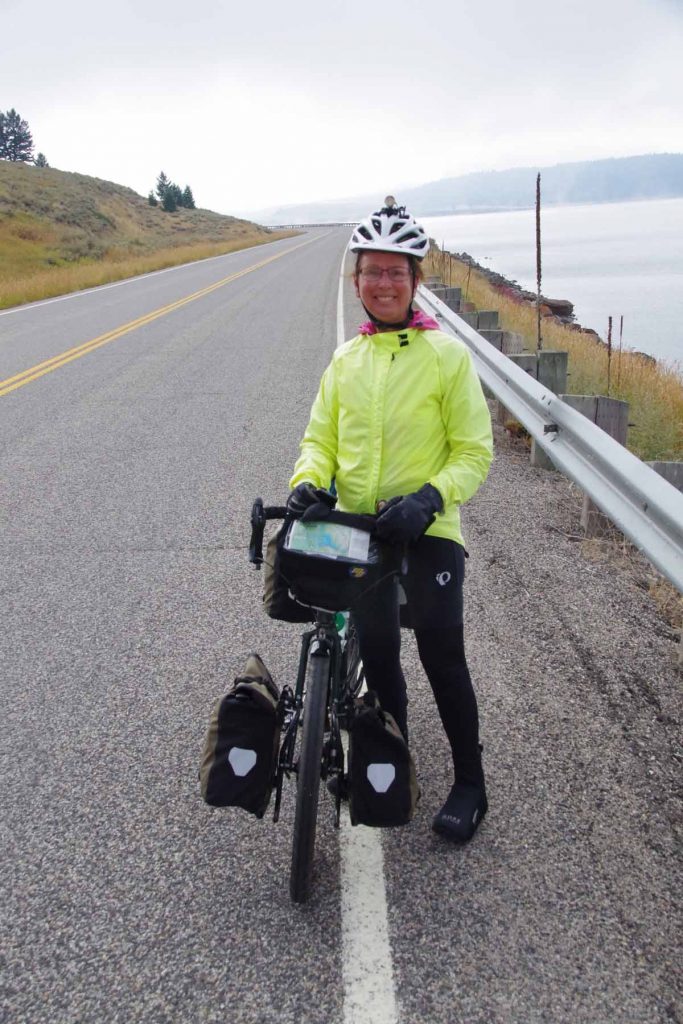 Met a touring cyclist on her way riding from Canon City, CO to Corvallis, OR. 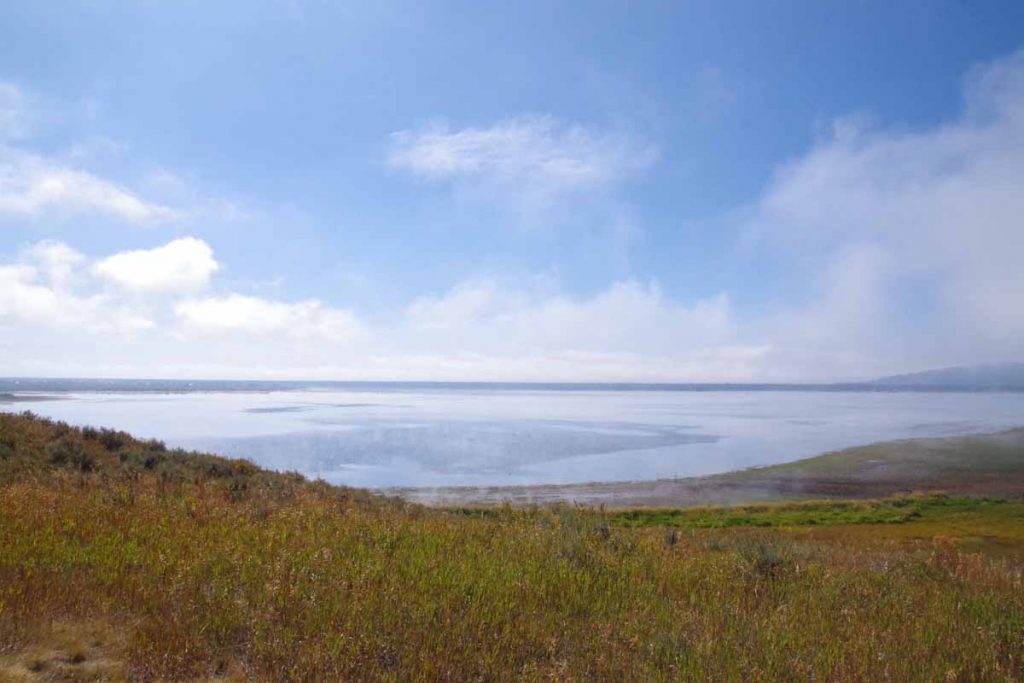 Here was another view of Hebgen Lake as the worst overcast had cleared and it finally started warming up. Still interesting to see in parts the lake was still steaming earlier as if the water temperature was warmer than the air.

After Hebgen Lake, joined US 191 and cycled the last eight miles into West Yellowstone. 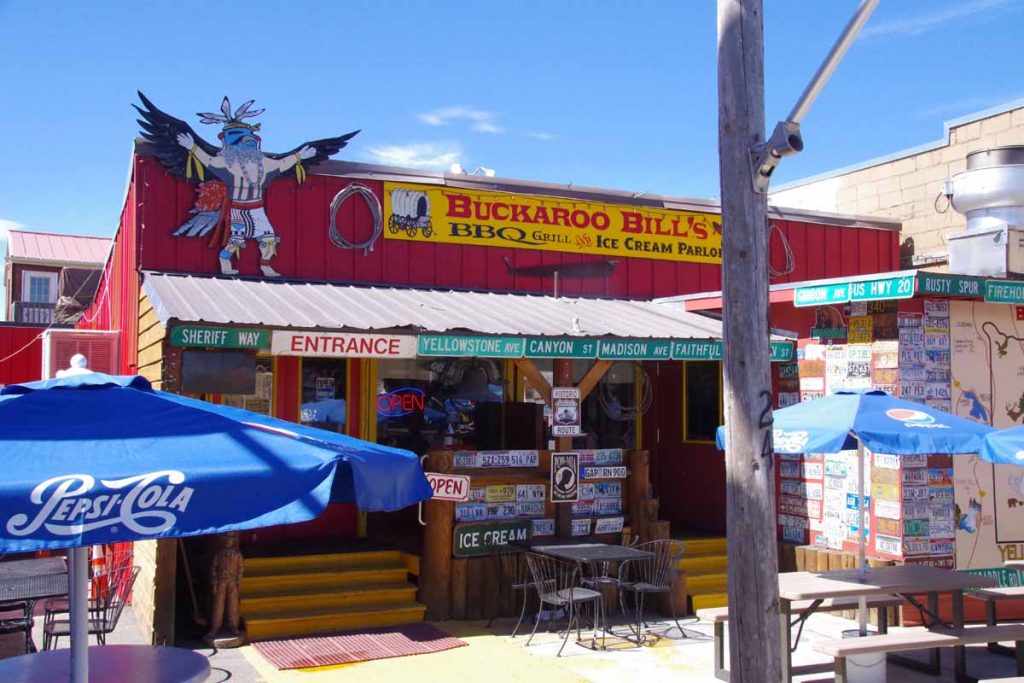 West Yellowstone is a touristy and somewhat expensive little town. I got a chance to walk around some of the shops including the local bike shop. Also stopped in the Visitor Center where I could look over the maps as next few days are planned out. 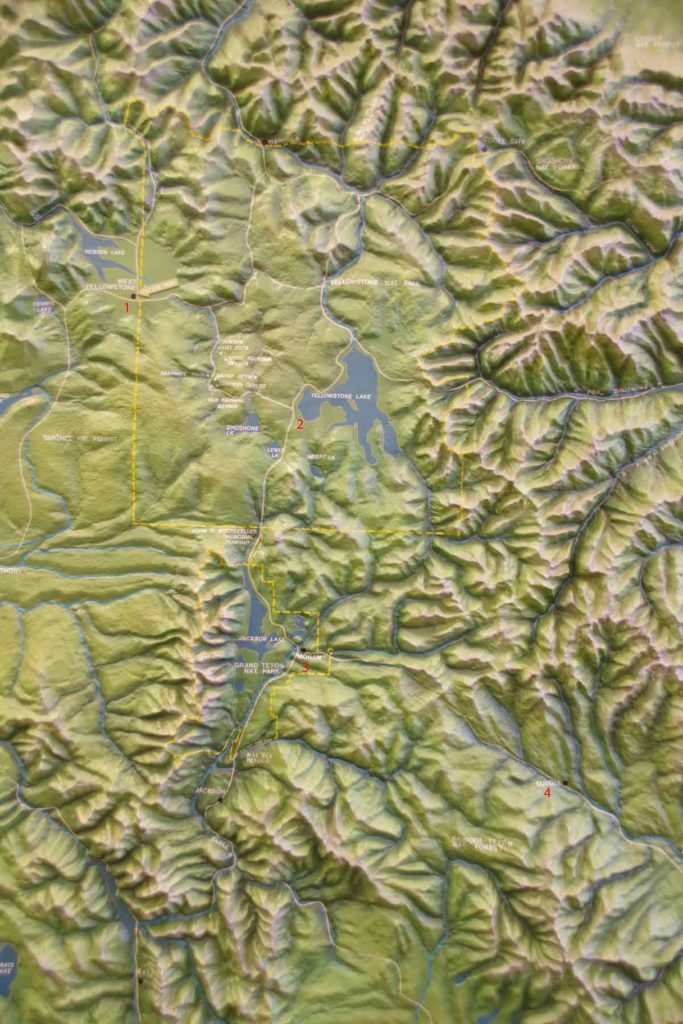 Good topographic view of the area. General plan is numbered on map above (1) West Yellowstone (2) cross into Yellowstone and camp at Yellowstone Lake (3) go south via Teton National Park and Moran, WY (4) cross Togwotee Pass and then over via Dubois, WY. In addition to being a bit hilly, this is somewhat higher elevation so glad I waited just a bit for the worst of the wet to pass through the area.

By the also passed two milestones in the ride to West Yellowstone: (1) passed 5,000km of cycling for this trip and (2) passed south of the 45th meridian – half way from North Pole to equator and also half way from Arctic Circle to the Tropic of Cancer (pretty close to southern tip of Baja).